A HOMEOWNER whose house is teetering on the edge of a cliff is terrified Storm Christoph will send it plunging into the sea.

Ed Cane has already lost 18ft of his garden to the weathering cliff face and fears his house on the Isle of Sheppey will be the next thing to go. 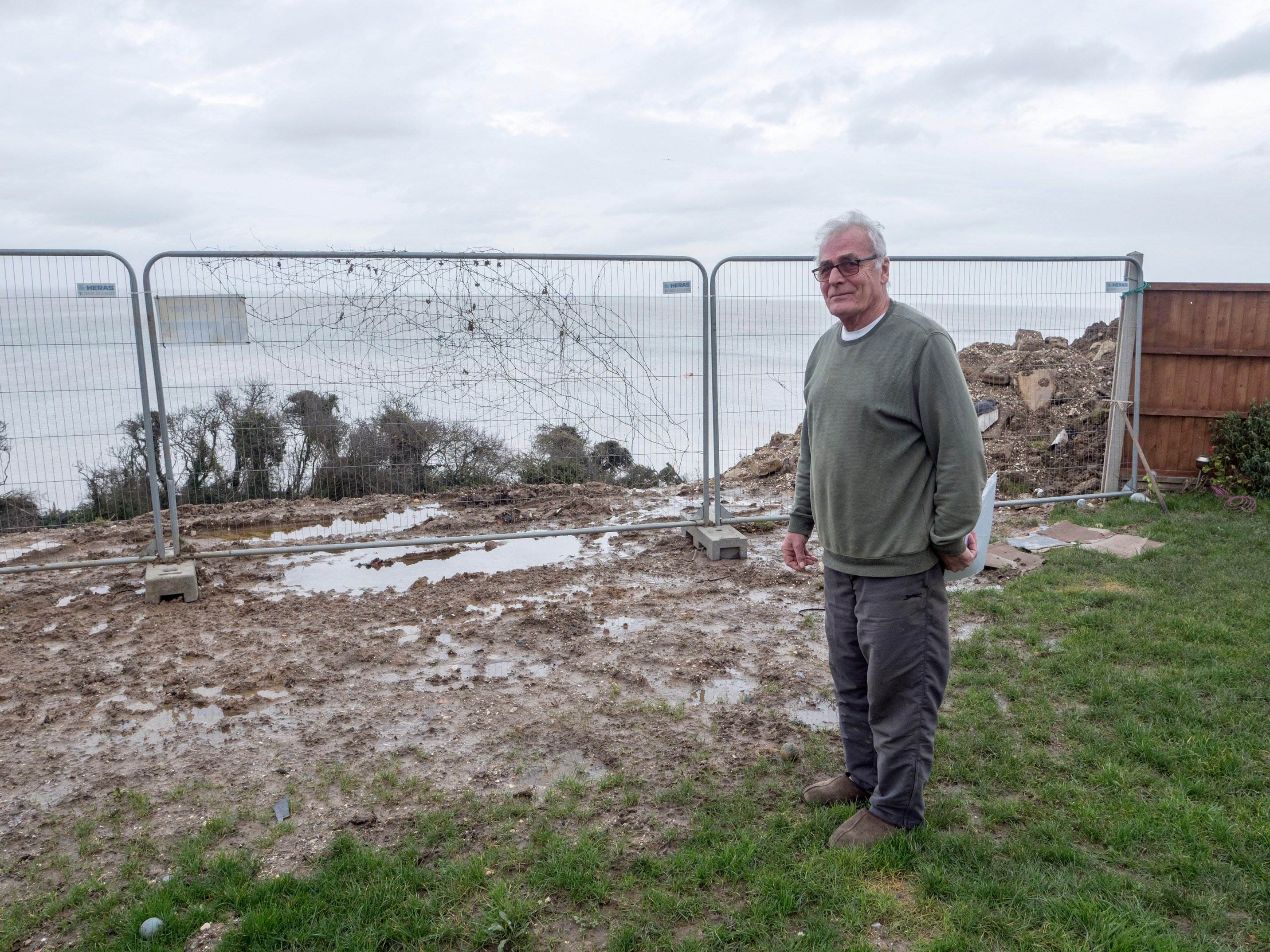 It comes just eight months after Mr Cane’s neighbour lost their £195,000 bungalow to the elements in Eastchurch, Sheppey.

Torrential rain had sparked daily landslides and with Storm Christoph set to bring two months worth of rain and snow in three days, Mr Cane is expecting the worst.

The 66-year-old, who lives with his wife Lynn, told Kent Live: “With all this rain, it’s just taking it away daily.

“I reckon I’ve lost about 18ft, if not more, in total. I’m praying the rain stops. It just runs down the road and off the edge like a little river.”

Swale council says planning permission is needed for engineering work to help – and this has not yet been granted.

“If Swale council was to put drainage in the road, that would help stop it,” Mr Cane said.

“It’s disgusting they’re not prepared to do anything but they are doing their utmost to stop us from trying to protect our homes.

“We need to carry on filling the hole. It’s not costing the council anything but shoring up the cliff will hold our homes back.”

He added: “I look out there every day to see if any more has gone. My biggest fear is our safety and losing our house. The amount that went the first time, if that went again, my house would be gone.” 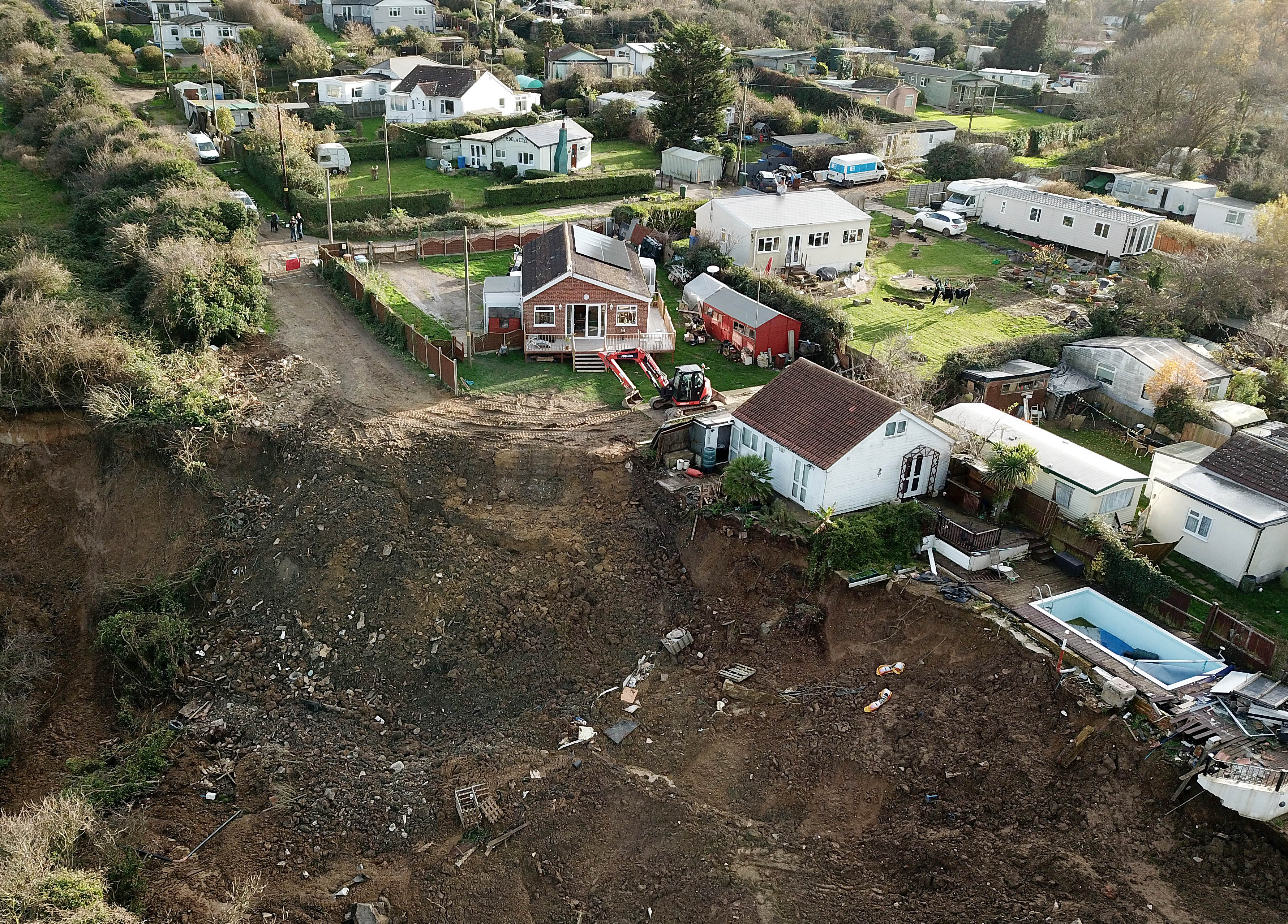 Mr Cane and his neighbours are urging the council to help themCredit: Steve Finn 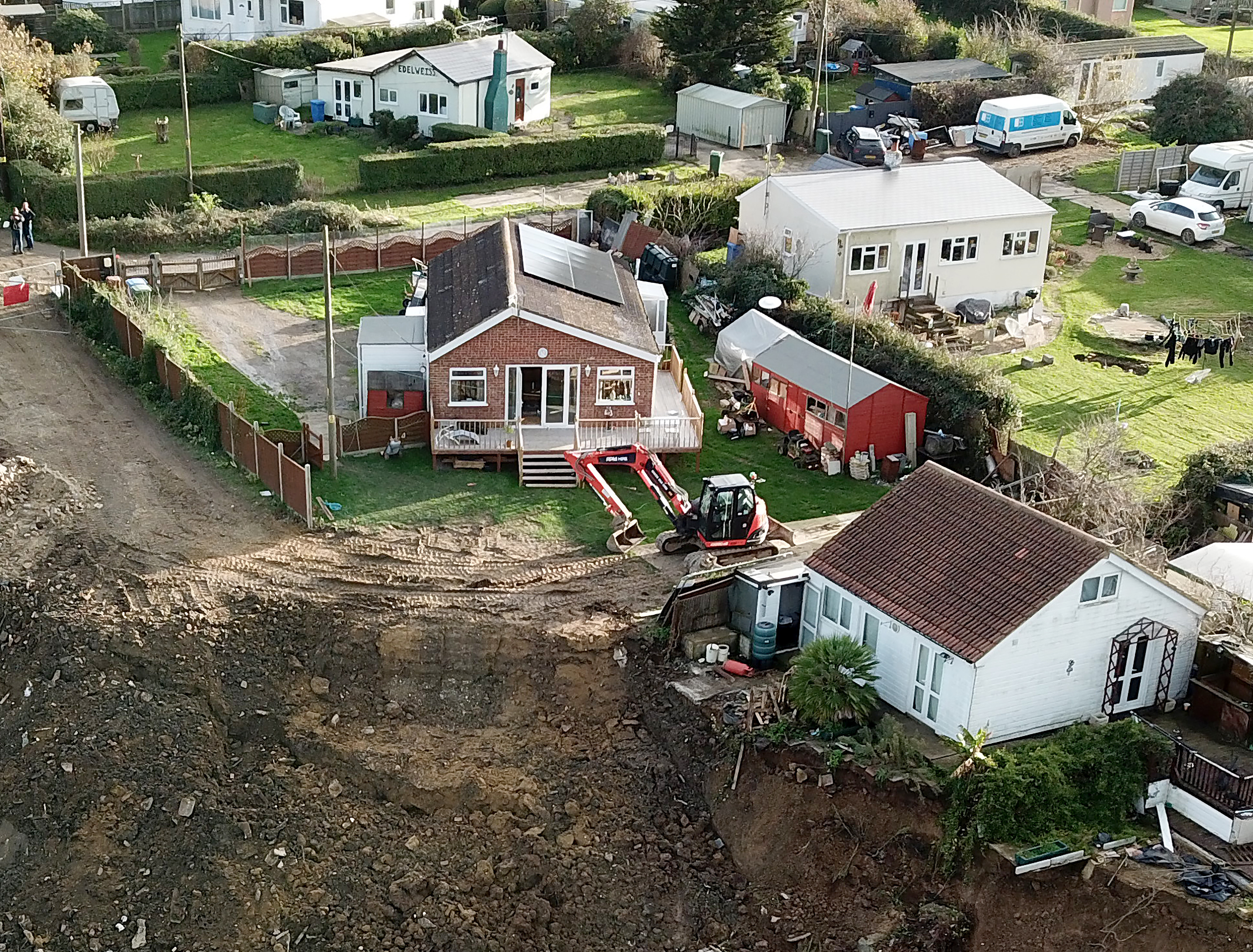 Their homes are all at risk of the crumbling cliffCredit: Steve Finn

Towards the end of last year, Swale council ordered the Eastchurch Gap residents to stop filling the sinkhole because it was worried about the “ecological effect” the soil dumping would have on the adjacent site of special scientific interest (SSSI).

Mr Cane said: “What I don’t understand is that the SSSI is supposed to protect the environment and wildlife. How the hell is letting all of that go protecting the environment or the wildlife?”

Malcolm Newell, chairman of the Eastchurch Cliff Erosion Community Group, which has been campaigning for better protection for the homes since 2015, also said the rain had not been helping the state of the cliffs.

“We need to stop the water running down the roads and over the edge. It’s a very big worry because Swale council are not moving on anything,” he said.

“They’ve told us they’ve got sympathy for us, but what about some help?

“There was no need for the work to stop. It needed to carry on to make it safe because it’s not safe now.”

Almost 300 flood alerts have been issued across Britain as Storm Christoph is set to smash the UK with two months’ rain and snow in three days.

And the Met Office warns of a “timeline of hazards” across Britain.

A Swale council spokesman said: “The engineering works proposed by the residents in the Surf Crescent area require planning permission.

“The application would need to include an assessment of the quality of the material intended to be used, as well as confirmation that the engineering works would deliver the required cliff protection without any adverse impact on the SSSI.

“So far, we’ve received some basic soil test information which was insufficient to demonstrate that the material used to shore up the cliff would not be a contamination risk and a more comprehensive study is required.

“To move forward we would advise the residents to employ specialist consultants that would liaise with us and the other statutory agencies involved.

“The road and associated drains do not fall to us to manage, however we have offered the affected properties housing advice and will continue to work with them as the cliffs change.

“The advice provided in the hazard awareness notices we sent to residents has not changed and we urge them to continue to engage with us.” 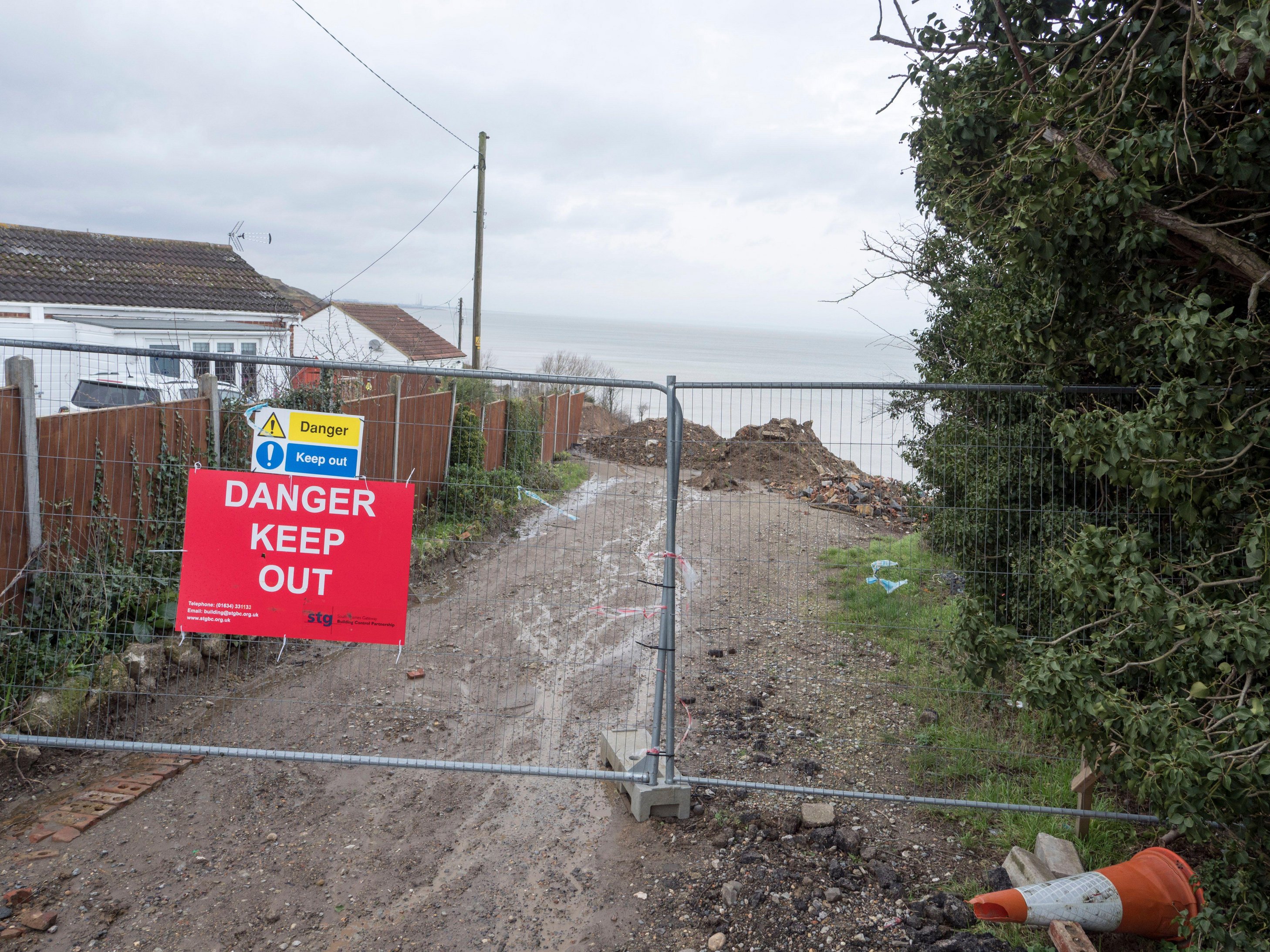 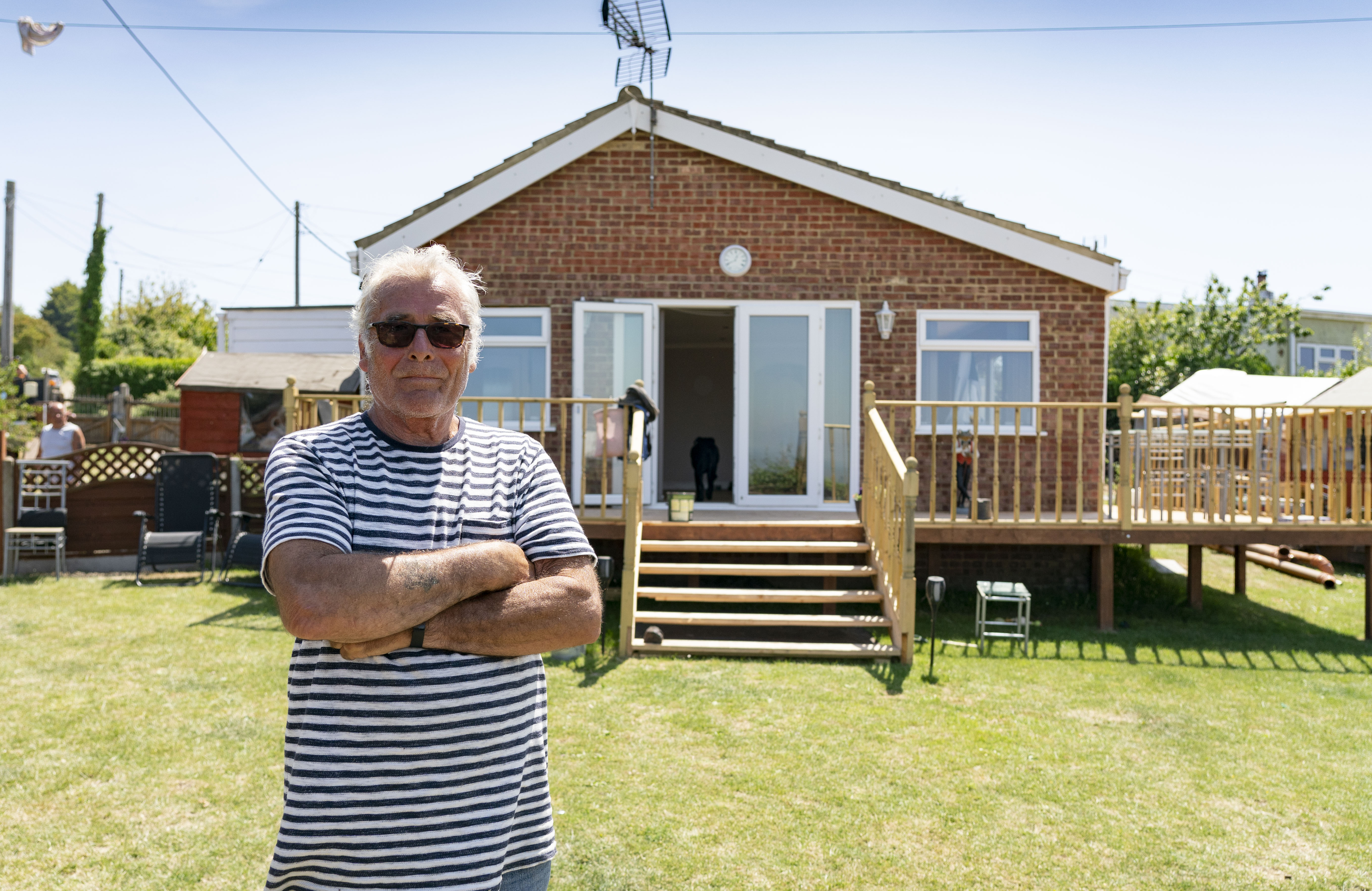 The house is now dangerously close to the edgeCredit: Dan Charity – The Sun