THE death toll from the Haiti earthquake has hit 1,297 as the hunt for survivors in the wreckage continues after the devastating 7.2 tremor.

The disastrous earthquake hit on Saturday, as the country is still dealing with the fallout from a presidential assassination last month. 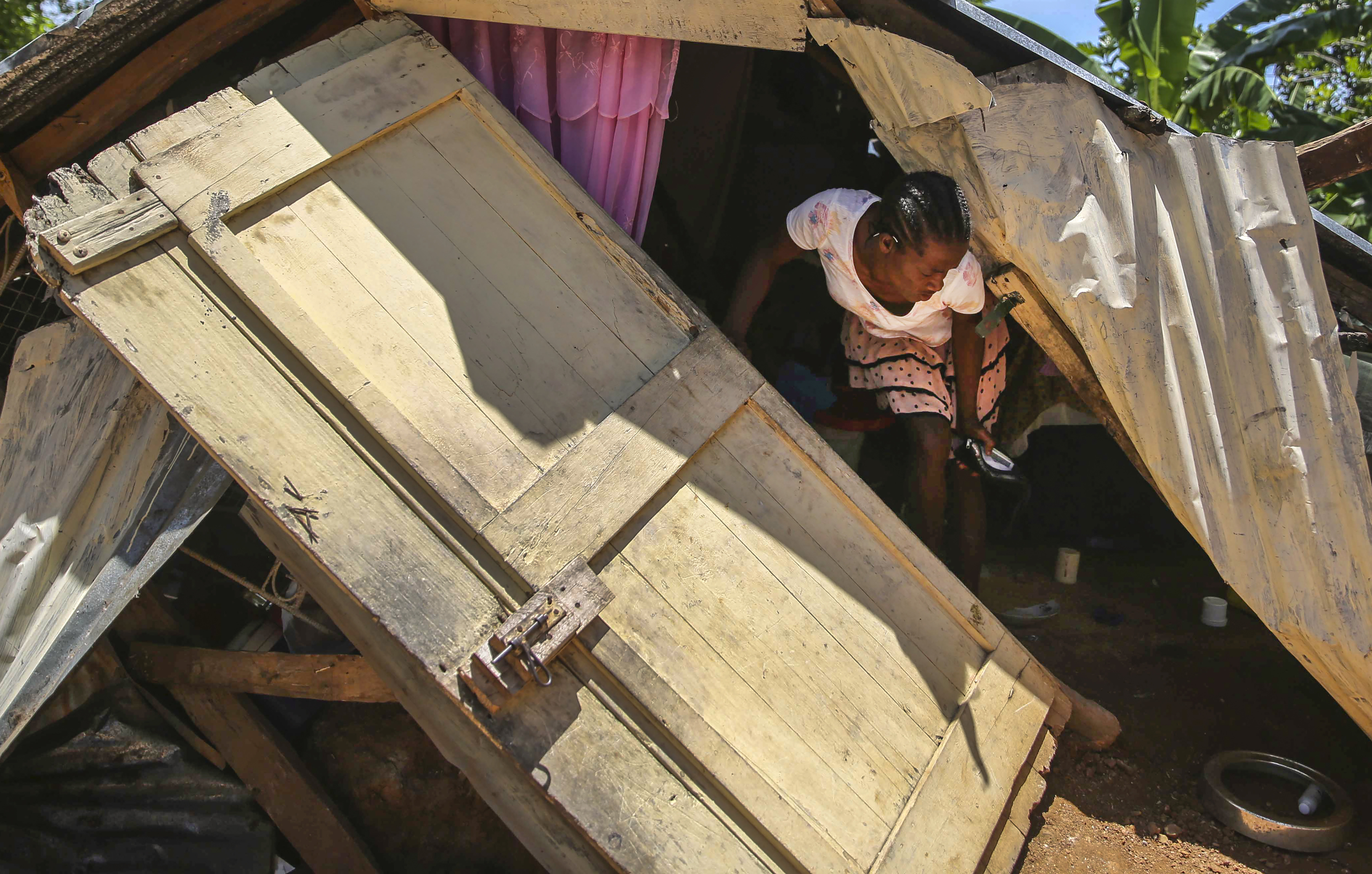 Homes were destroyed as the 7.2 quake struck Haiti on SaturdayCredit: AP 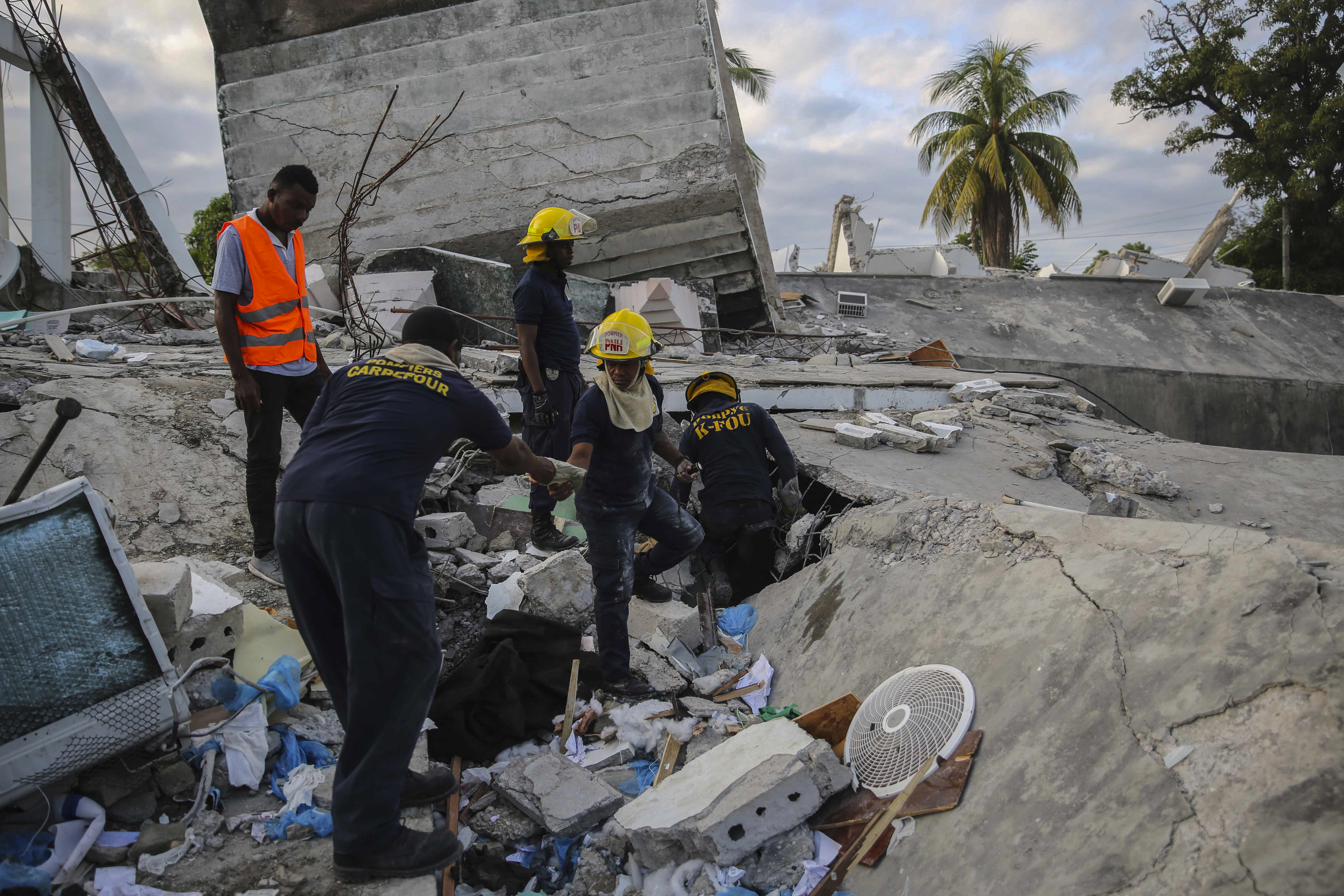 Rescue crews desperately searched for survivors after the quakeCredit: AP 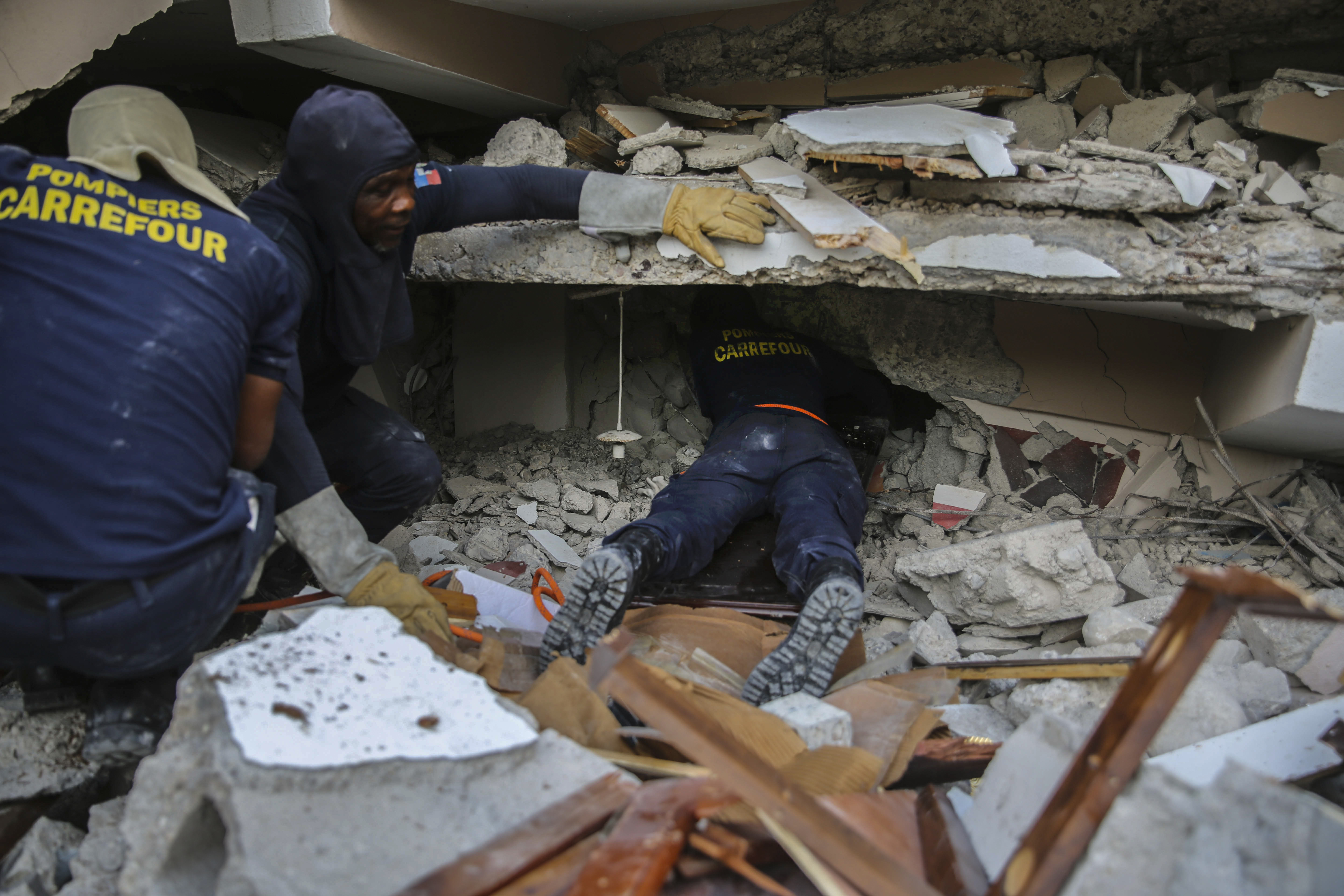 The magnitude 7.2 earthquake struck about 5 miles from the town of Petit Trou de Nippes, about 93 miles west of the capital Port-au-Prince, according to the US Geological Survey (USGS).

Prime Minister Ariel Henry said he was rushing aid to areas where towns were destroyed and hospitals overwhelmed with incoming patients.

USGS estimated “thousands of fatalities” are likely, as well as “tens of thousands of injuries in poor mountainous communities.”

“High casualties are probable and the disaster is likely widespread,” a statement from the agency released around an hour after the quake said.

“Past events with this alert level have required a national or international level response.”

Haiti’s Civil Protection Agency said that the death toll had risen to 1,297 by Sunday night.

Images posted to social media showed significant damage to buildings including collapsed homes and rubble splayed across the road.

French-language newspaper Le Nouvelliste reported on Saturday that “The majority of hotels and churches on the south coast of Haiti, which are often the most important buildings in cities, have collapsed or suffered significant damage.”

Economic losses could range in the tens of millions, USGS reports.

President Joe Biden authorized an immediate US response to the earthquake on Saturday afternoon and named US AID Administrator Samantha Power as coordinator of the effort.

He confirmed the motion in a tweet, writing: “We will make the necessary arrangements to assist people affected by the earthquake in the Southern Peninsula.

“We must show a lot of solidarity with regard to the emergency. The government will declare a state of emergency. We will act quickly.”

His state of emergency declaration will be in place for at least the next month.

At a press conference, he said he would not ask for international help until the extent of the damages is known.

Biden later said in a statement: “In what is already a challenging time for the people of Haiti, I am saddened by the devastating earthquake that occurred in Saint-Louis du Sud, Haiti this morning.

“We send our deepest condolences to all those who lost a loved one or saw their homes and businesses destroyed. I have authorized an immediate US response and named USAID Administrator Samantha Power as the senior US official to coordinate this effort.

“Through USAID, we are supporting efforts to assess the damage and assist efforts to recover those who were injured and those who must now rebuild.

“The United States remains a close and enduring friend to the people of Haiti, and we will be there in the aftermath of this tragedy.”

Haiti is still recovering from a magnitude 7 earthquake from 11 years ago that struck closer to the capital and killed at least 250,000 people, injured 300,000, and displaced more than 1.5million.

The country is also still reeling from the assassination of President Jovenel Moise on July 7.

To make matters worse, the region may be impacted by Tropical Storm Grace early next week.

Formerly a tropical depression, Grace strengthened to tropical storm status about 400 miles east of the Leeward Islands in the Atlantic Ocean, according to the National Hurricane Center.

The storm is expected to bring heavy rain and flooding and could hit Haiti as soon as Monday, forecasts show. 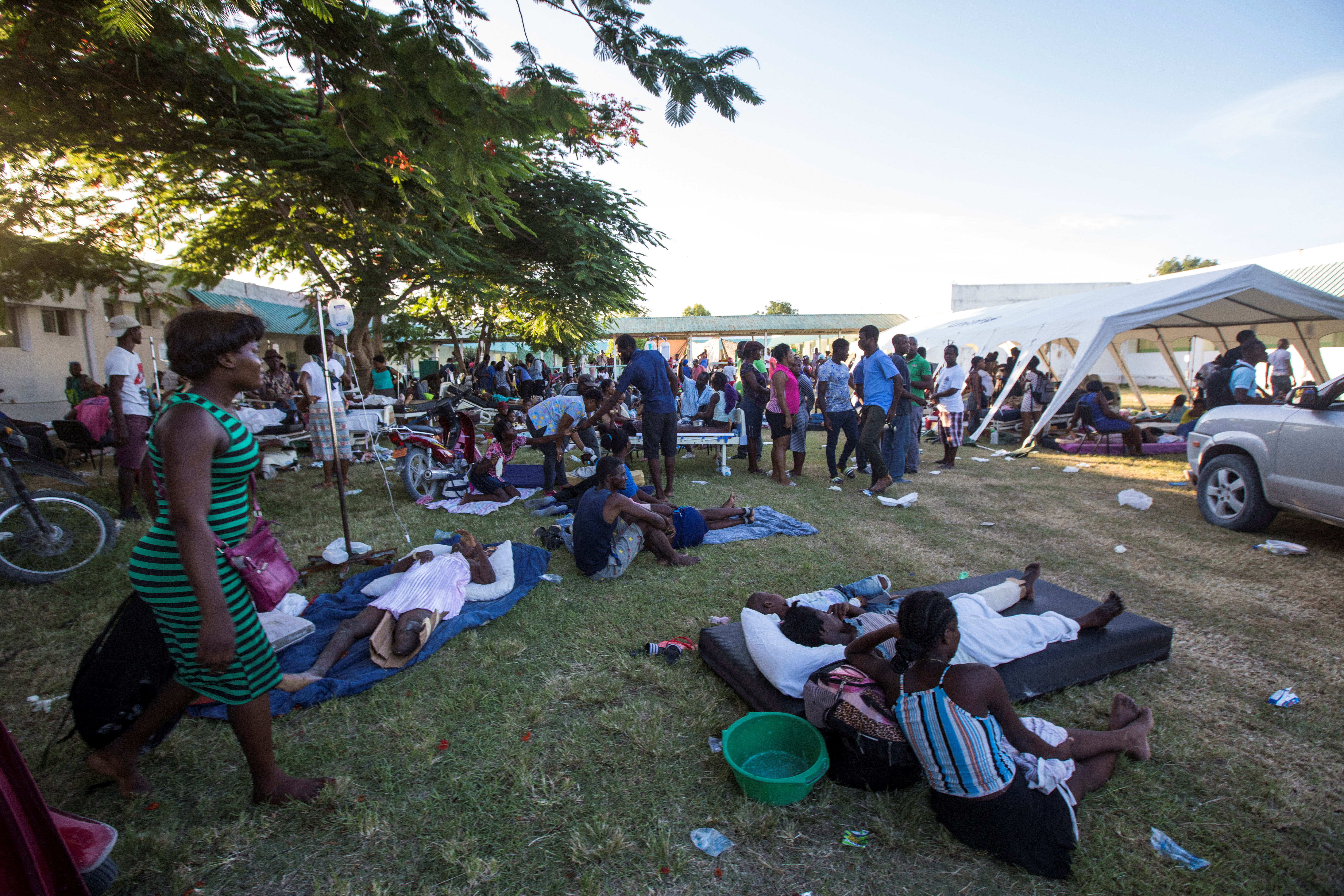 Patients outside a damaged hospital after the quakeCredit: Reuters 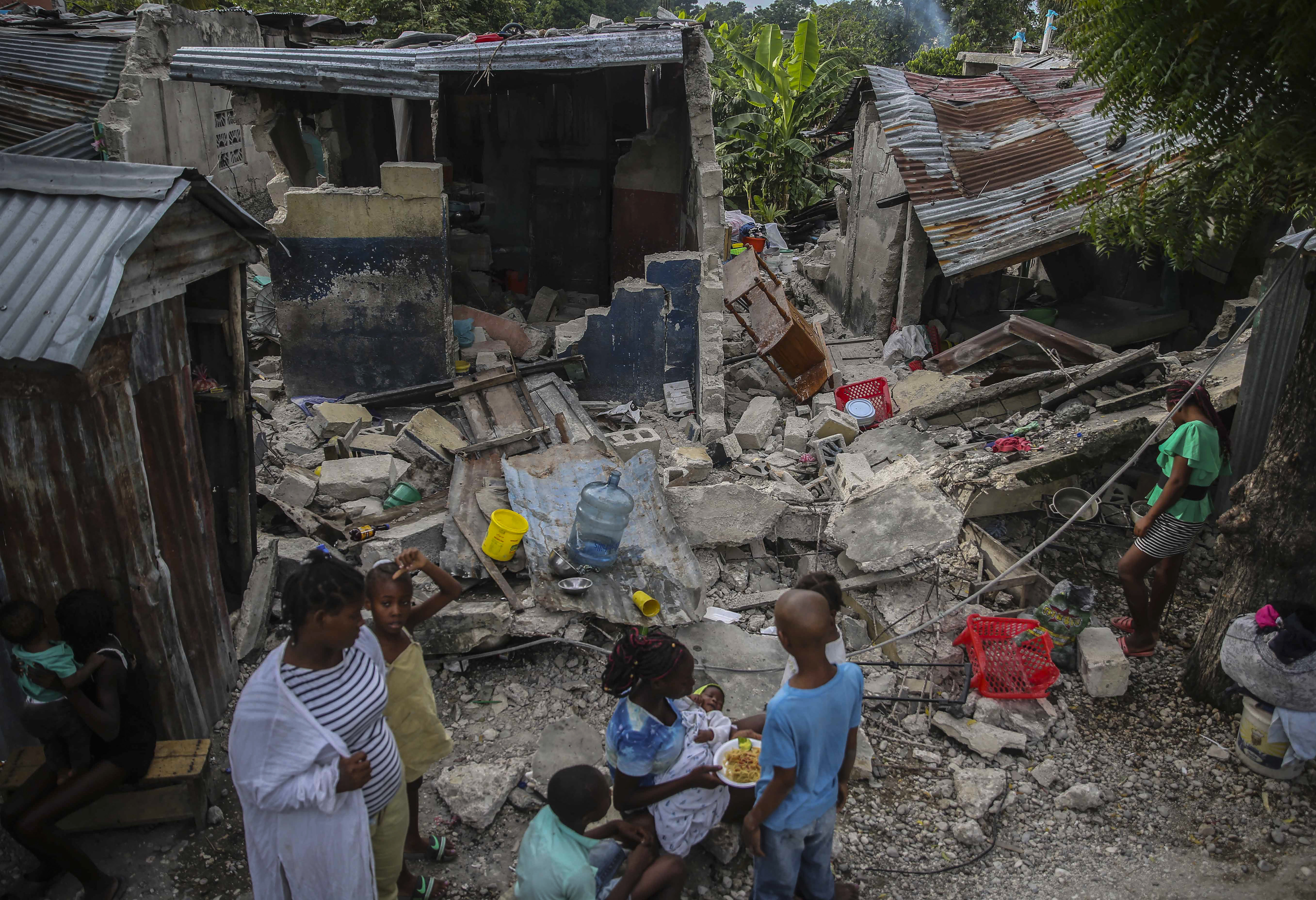 People tried to search for belongings in the rubbleCredit: AP 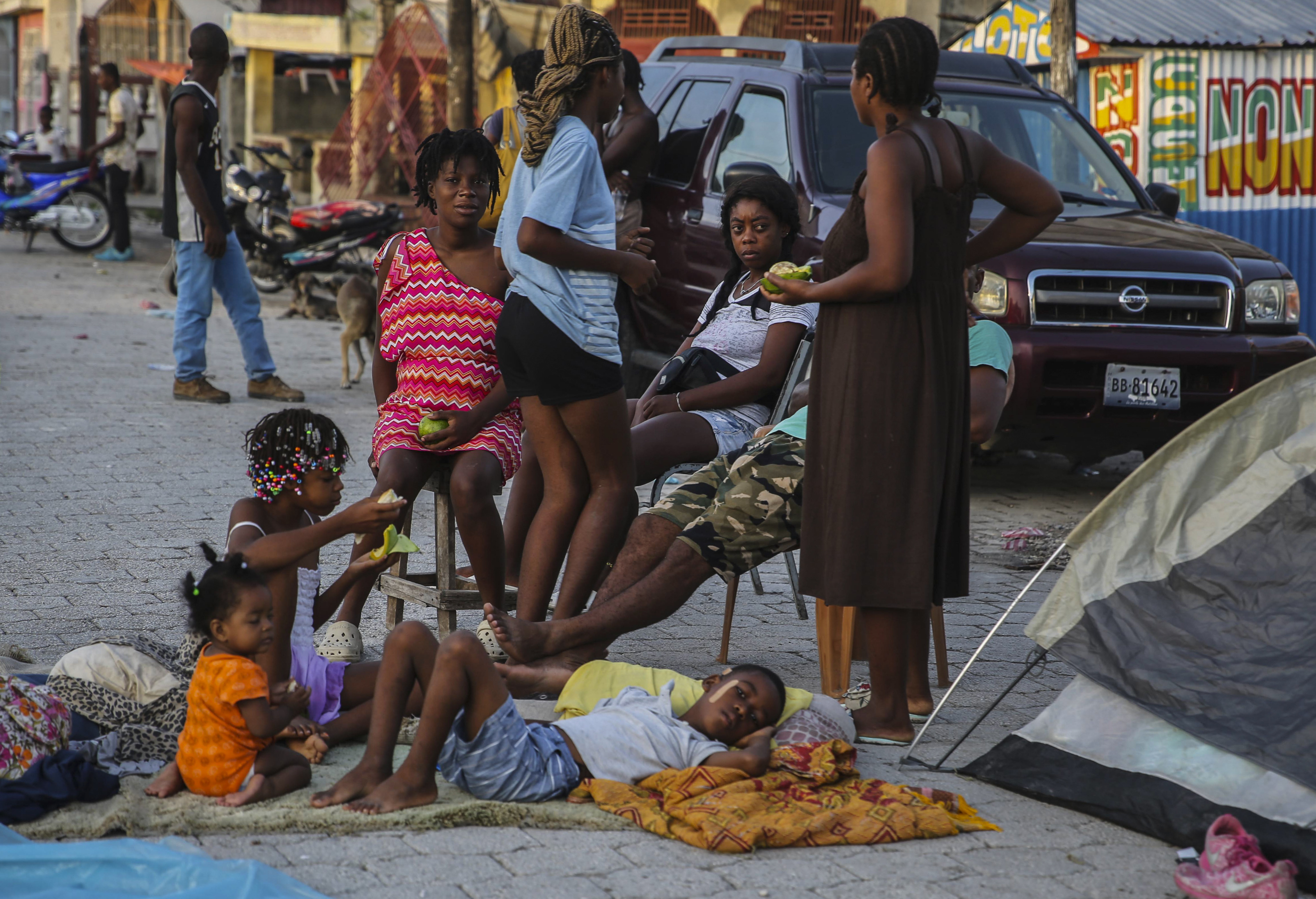 A state of emergency will likely be in place for the next monthCredit: AP