A SELF-styled ‘gypsy king’ walked down the aisle to marry the love of his life – despite his ex vowing to derail the ceremony.

Donald, 22, a Romanichal gypsy, was finally marrying his fiancé Amanda, 31, who was seven-months-pregnant. 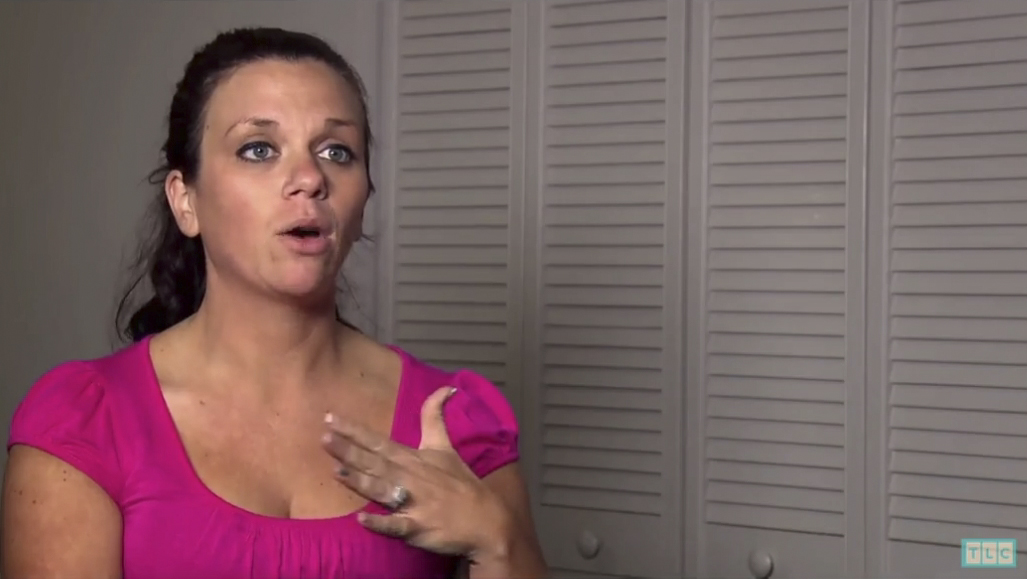 Pregnant Amanda walked down the aisle to marry the love of her life, DonaldCredit: TLC

With the guests, officiant – and boxing ring – ready to go, Amanda was ready to become a ‘queen’, but Donald’s ex threatened to gatecrash the party.

Speaking to TLC in a YouTube clip, Amanda, from the US, said: “Is Felicia going to show up to ruin this?

“If Felicia turns up at the wedding I am going to physically beat her ass.”

Donald was also worried about his current and former lover brawling, saying: “I’m thinking my wife is going to fight pregnant because I wouldn’t be able to stop her.” 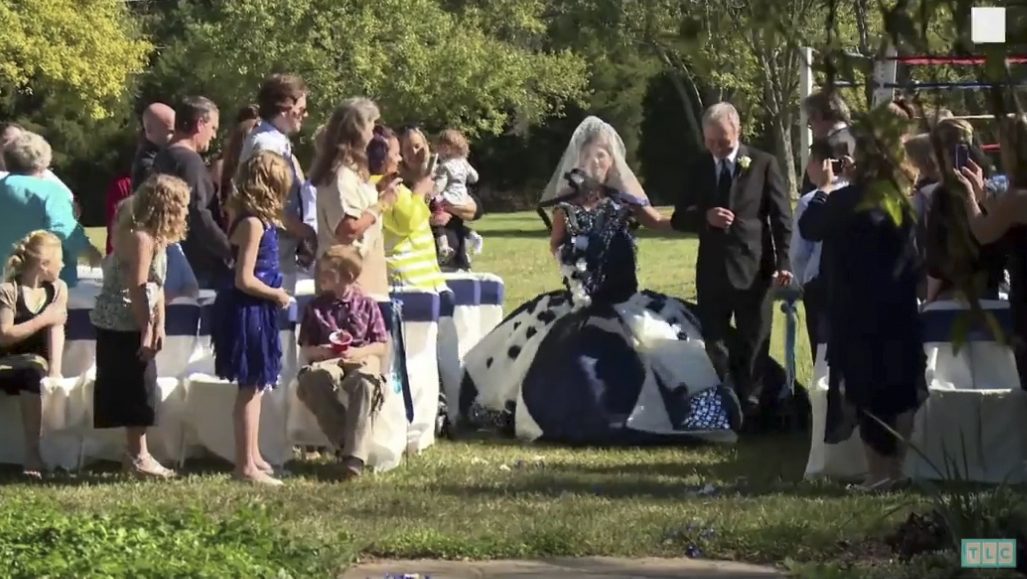 But Donald ignored her request for a simple frock and dressed her a traditional dressCredit: TLC

As wedding preparations got underway, Felicia, 26, vowed: “I’m going to go to this wedding to make sure Donald doesn’t make the biggest mistake of his life.”

As she got ready, Amanda said: “I hope Felicia going to get the hint and leave us the hell alone.”

Tensions mount as the vows get underway, as Amanda fears Felicia will turn up, and has one eye out, as does Donald.

But luckily Felicia sees reason after a pep talk with her mum, and stays away.

Through tears, she says: “He’s getting married and he’s going to have a kid. 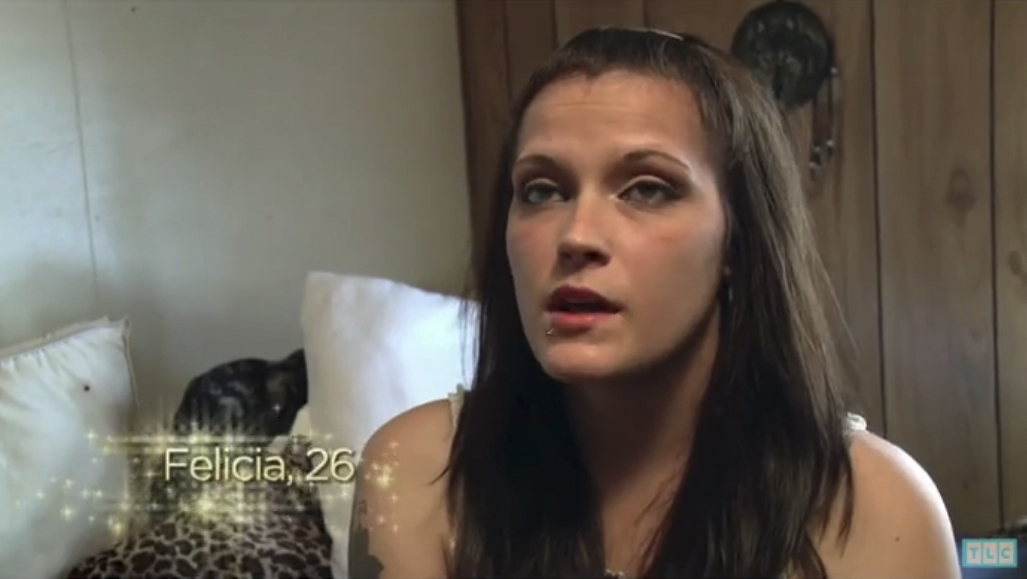 “I didn’t turn up to the wedding because I finally decided to let go, to move on and let go. All I can do is wish the best for him and wish he’s happy.”

And her mum agreed, saying ‘just let him go’.

With the threat of Felicia out the way, the guest enjoyed a proper celebration, with Donald and his family donning gloves to fight in a wrestling ring he had erected. 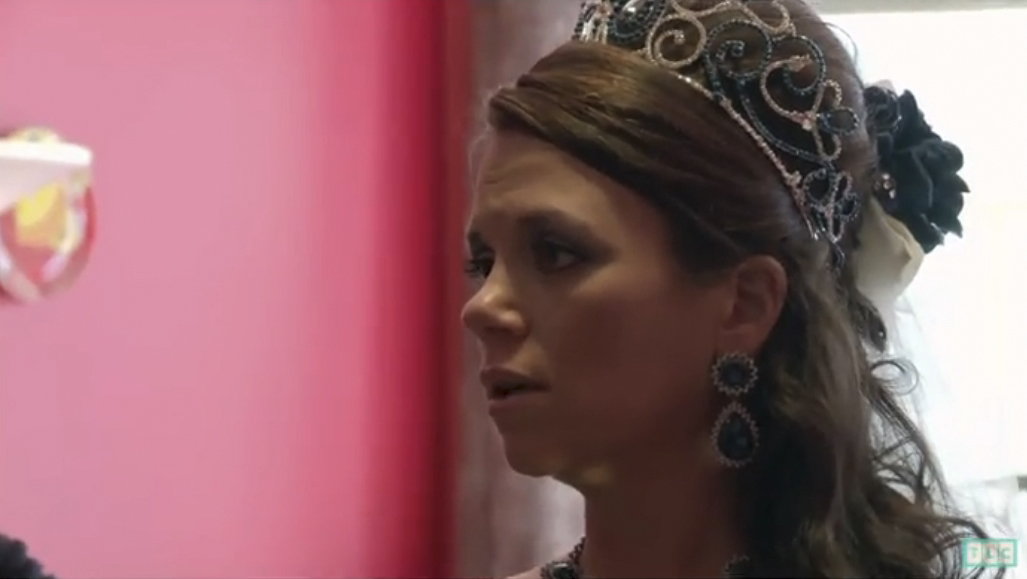 Amanda threatened to fight Felicia, despite being pregnant Credit: TLC

Amanda looked on, saying: “Then of course Donald opens the ring and boys will be Romney boys.”

With some blood spilled and a few punches thrown, the wedding party cuts the cake and enjoys some drinks and dancing.

But Amanda nearly didn’t make it down the aisle, after Donald ignored her request for a ‘simple elegant’ dress, and put her in a ‘gypsy’ frock instead. 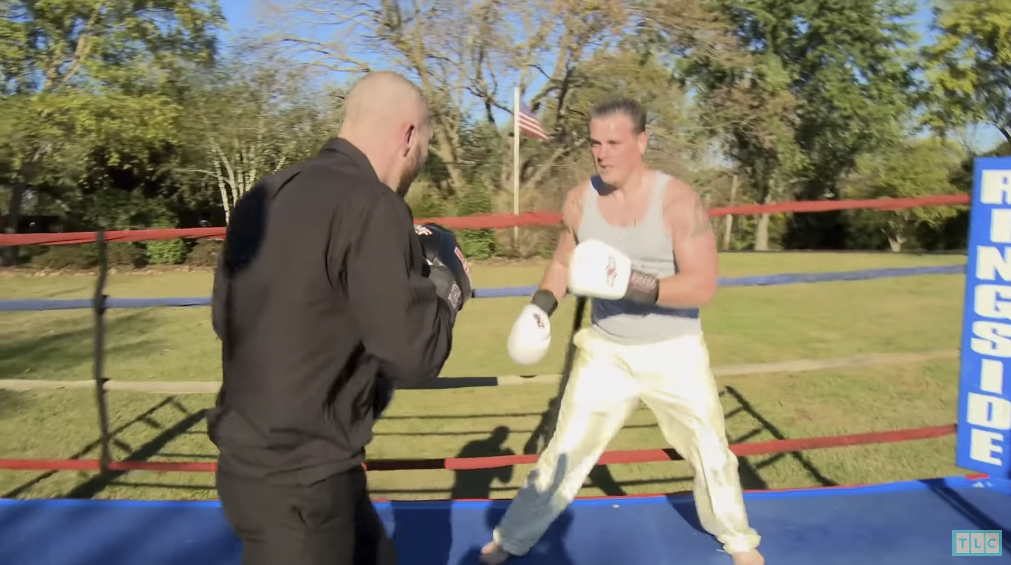 Donald set up a boxing ring at his wedding and went a few rounds Credit: TLC

As wedding designer, Cellia, turns up with the goes Donald has ordered, Amanda’s heart drops as she looks at the massive box.

With tears streaming down her face, she says: “I know as she’s pushing this huge box in it’s not going to be a simple little elegant dress.

“At first I was thinking, that is not what I ordered. But then as she put me in the dress and I transformed into the princess that came out of the dress, and I saw myself for the first time, I loved it, and I was like proud of Donald. 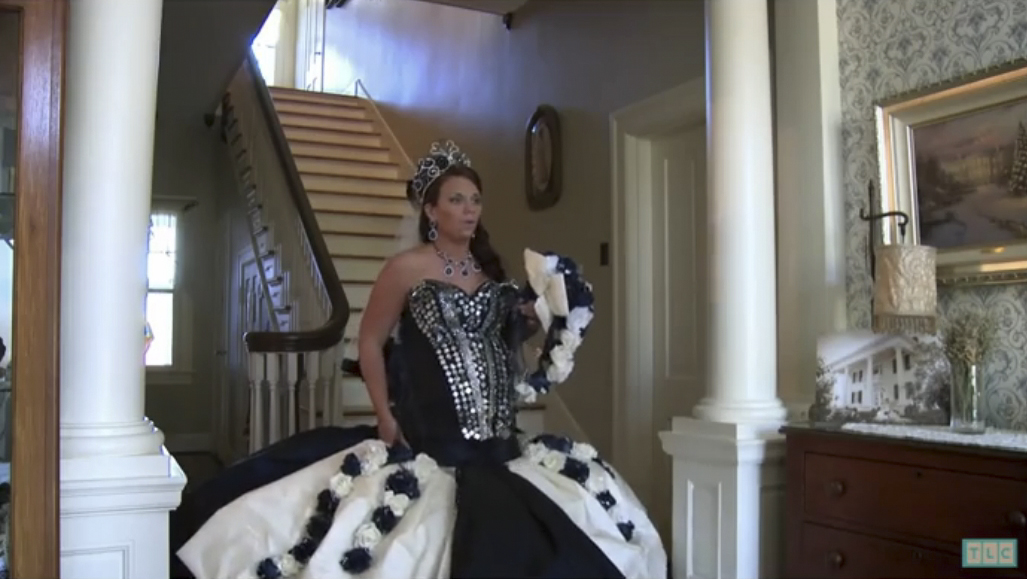 “It was definitely more than I could have ever dreamed of.

“I am shocked. Speechless. It’s beautiful.”

The navy and white dress featured a massive hoop skirt, covered in jewels, with a veil.

Her friends and family were equally blown away, with her mum, Wendy, saying: “Donald has gypsyfied this dress for sure. So he has gotten his way in the end.” 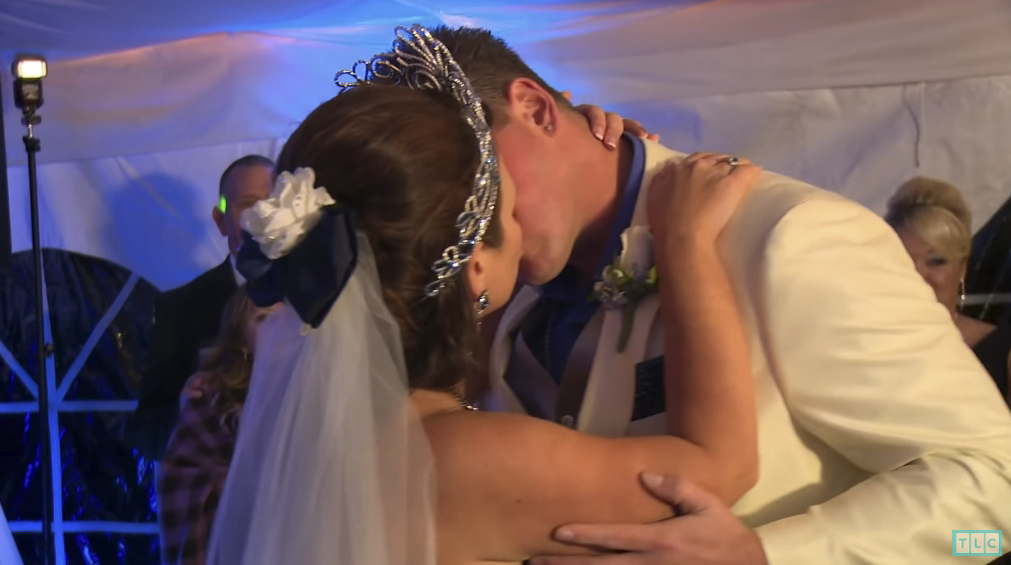 But after putting it on she loved it, and said she was married in to the way of life now Credit: TLC

And bridesmaid, Jessica, added: “I have never in my life seen a dress like that before. It is definitely a gypsy dress, she did not escape that. It is huge.”

Donald, who got married in a bejeweled jacket which said ‘Romney Gypsy’, said: “When I was standing up just waiting there I was nervous I was shaking and stuff like that and it just got worse and worse.

“When I finally got to see her, it was the first time I’d seen the dress myself. 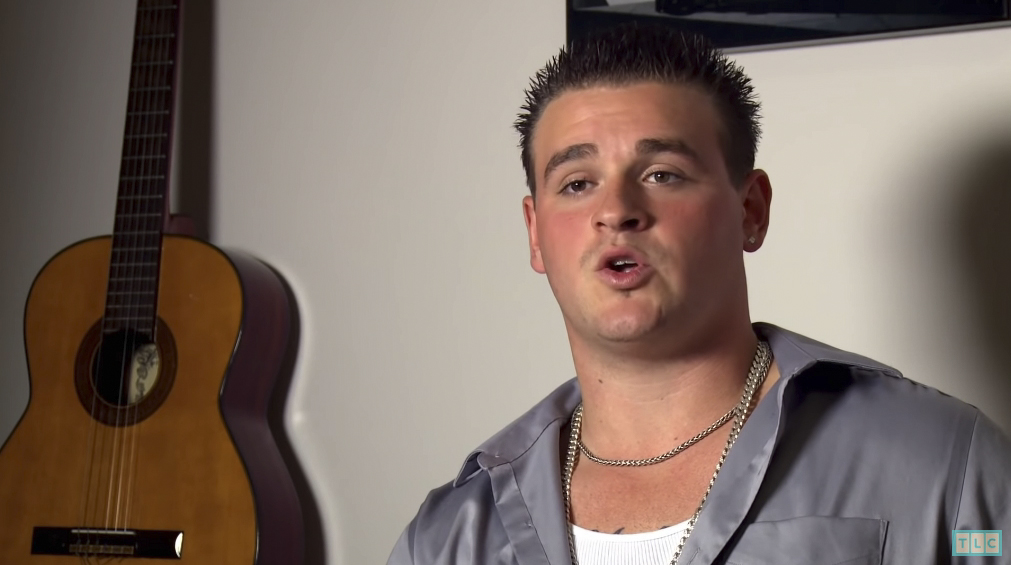 Donald said he finally got his queen, with his jacket saying ‘Romney gypsy’ Credit: TLC

“She just looked amazing, and the clothes she got, the more beautiful she got, and she looked just like a Romanichal bride.”

Recalling walking down the aisle, Amanda gushed: “I look up and I kind of meet eye to eye with Donald, I knew I had my handsome gypsy prince finally.”

While Amanda added: “I’m married into the gypsy life now, so my whole life will be blinged up forever.” 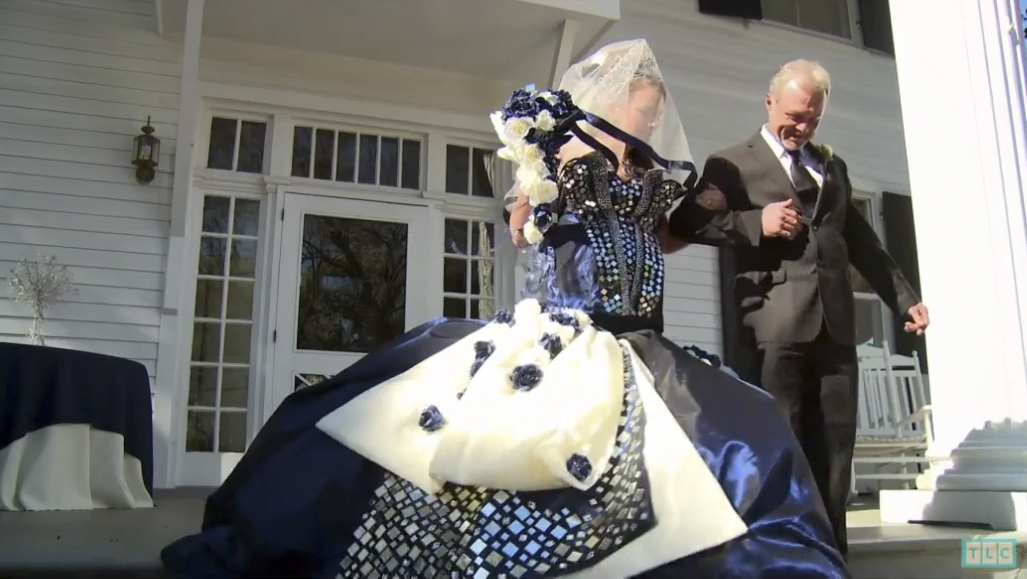 Amanda was over the moon when Felicia decided to stay away Credit: TLC

While this bride asks her groom-to-be if she can hug her ex-boyfriend ‘one last time’ – and he says yes.

And this couple who reveal they waited until marriage to have sex are viciously trolled on TikTok as ‘f****** nerds’.

In other relationship stories, one user shared that she keeps sex cards on every guy she’s slept with – and ranks their performance.

Duke Bootee, co-writer of Grandmaster Flash’s ‘The Message’, has died