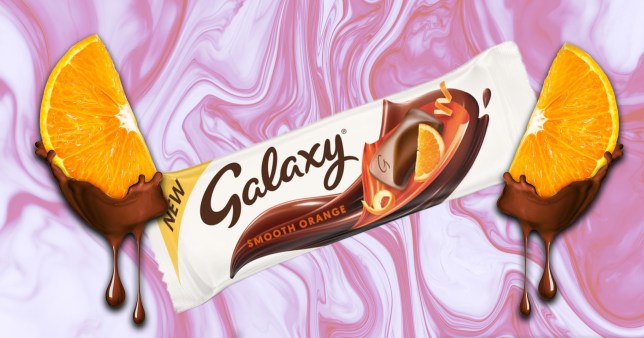 Well, you would be wrong – because the legendary chocolate brand has launched an orange flavour bar.

Speaking about the new release, Ellyse O’Connor, Galaxy Senior Brand manager, said: ‘Galaxy Smooth Orange is kind of a big peel and I encourage Brits to squeeze the day, give their peel of approval, and treat themselves to a Galaxy Smooth Orange chocolate bar next time they’re in the shops!

Galaxy announced the news of the orange-infused treat on its Instagram page at the beginning of the month. The post describes the bar ‘as the silky taste of Galaxy milk chocolate you know and love, with a delicious twist of bold orange.’

He told his followers: ‘This is typical Galaxy, sweet and milky with a hint of orange flavour, but it’s nowhere near as distinctive as Terry’s chocolate orange or even as good as Cadbury’s orange buttons.’

However, we don’t think it will deter chocolate lovers from purchasing.

Chocolate orange is a firm favourite among sweet aficionados. The sweetness mixed with the hint of zest is a winner and thankfully there is an array of options out there to try.

Why not sample the Orange Smarties bar, which returned in February and is sold in Asda?

A classic in the confectionary world, Terry’s Chocolate Orange is the original and the best and you can never go wrong.

The best chocolate bar to dip in tea? Hands down it has to be a Twirl and the limited edition orange creation is utterly delicious.

While for those who love a classic, why not take a bite out of Wagon Wheels Orange? The biscuit filled with mallow and orange flavoured jam and covered with chocolate flavoured coating is a dream.

And if you love cookies, look no further than Maryland Jaffanators. Crunchy, sweet and tangy, you will never reach for a plain cookie again.