A YOUNG family who bought a home in a new area were shocked after receiving a brutal, expletive-filled note from a furious neighbour.

The new homeowners had installed an alarm before they moved in, which had accidentally gone off one night when the house was empty. 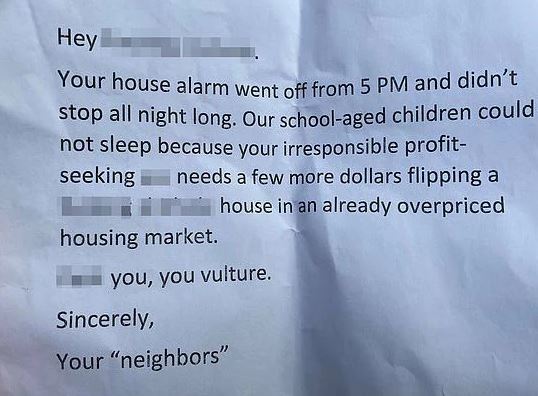 A family were shocked when they received a brutal note from an angry neighbourCredit: Facebook

The family, who live in a West Auckland suburb in New Zealand, shared their experience with their new community via Facebook, NZ Herald reports.

They installed an alarm in the property, which went off the day it was wired in, sounding continuously from 5pm and going all night until neighbours called police.

One neighbour was so incensed they delivered an anonymous note to the house, which left the new owners “gutted”.

“Hey f***ing a**hole,” the note began, “Our school-age children couldn’t sleep because your irresponsible profit-seeking a** needs a few more dollars flipping a s***hole house in an already overpriced market.

They installed an alarm in the property before they moved in, which went off the day it was wired inCredit: Getty

The note was signed off: “Sincerely, your neighbours”.

The admin of the page that shared the family’s message said the story had brought him to tears, telling locals that “mistakes happen”.

“Take a breath and try not to make assumptions,” he wrote.

“This person is a new homeowner who is stretched to get a home for their family, not a speculator, as assumed by the writer of this note. You could be neighbours for a long time to come.”

“Our school-age children couldn’t sleep because your irresponsible profit-seeking a** needs a few more dollars flipping a s***hole house in an already overpriced market.

The family, who wanted to remain anonymous, said they were “greatly embarrassed that we’ve caused our neighbours unrest before we’ve even moved in” and that they were “gutted” by the note.

They said: “We’re a family with young children so I’m dismayed at causing someone else’s children unrest. But also that we’ve had this welcome to the neighbourhood.

“I did go round and apologise to the neighbours to each side and behind our house and they were all lovely considering I must have caused them a sleepless night.

“Whoever wrote us this note caused a lot of hurt and we are not investors who’ve flipped anything but are a family who’ve signed on for a huge 30-year mortgage in this overpriced market in hope of owning somewhere to bring our kids up in.

“It was an awful situation that our alarm went off and I’m wholly apologetic but I don’t think it warrants this note at all.”

People were quick to offer support to the family, advising them to ignore the anonymous note and welcoming them to the neighbourhood.

“What an absolutely awful thing to have hanging over the new homeowner when it should be an incredibly exciting time for them and their family,” wrote one.

“I can’t begin to imagine what sort of person would write something like this.”

“We hope this hasn’t put you off this wonderful neighbourhood that you’re about to move into,” another said.

This article originally appeared on News.com.au and was reproduced with permission.

Previously, a couple shared a shocking note they received from their angry neighbour – but people think they have every right to be mad.

And a fuming woman writes angry note to neighbour who she thinks nicked her takeaway – so who do you think is in the right?