Erst, Manchester: ‘One of the best meals of the year’ – restaurant review | Food

A restaurant menu can be the sweetest kind of promise: we have these ingredients; we have ways to prepare them; what would you like? But they are not straightforward documents. Some menus get it so very wrong. There are those that quietly murder the English language. Things are “nestled” in “symphonies”; there are “trios” and “melanges” and “mosaics”, which make it sound less like dinner and more like an over-catered Roman orgy. Other menus fail by dint of being too long. Surely no kitchen can manage all these dishes, or be fluent in the culinary vernaculars of Mexico, Thailand, Korea, Goa and Dongbei?

Then there is the menu at Erst, located amid the blocky red brick lanes of Ancoats, England’s first industrial suburb, not far from Manchester’s city centre. Like the polished concrete floors and the breezeblock walls, the menu is sparse to the point of minimalism. I count just 10 savoury items. One of those is a bowl of olives with pickled chilli peppers. Two of them are bread-based. Another has a line through it. The mackerel didn’t arrive, apparently. So nine dishes. Kind of. Because, as I say, one is olives and two are bread. Less the sweetest kind of promise and more of a shy whisper, perhaps. There’s only one thing to do. We order the lot.

‘On the grill it has bulged and expanded, blistered and broken’: flatbread with tomato. Photograph: Shaw & Shaw/The Observer

The result, in its quiet, unshowy way, is one of the best meals of the year so far; a succession of modestly priced platefuls, which bring on low groans and delicate sighs of happiness. And that’s even allowing for the fact that the olives and chillies are bought in. It starts quietly with a couple of Carlingford rock oysters dressed with a precisely judged spoonful of mignonette, that simple dice of vinegared shallots with cracked black pepper. How very bracing. 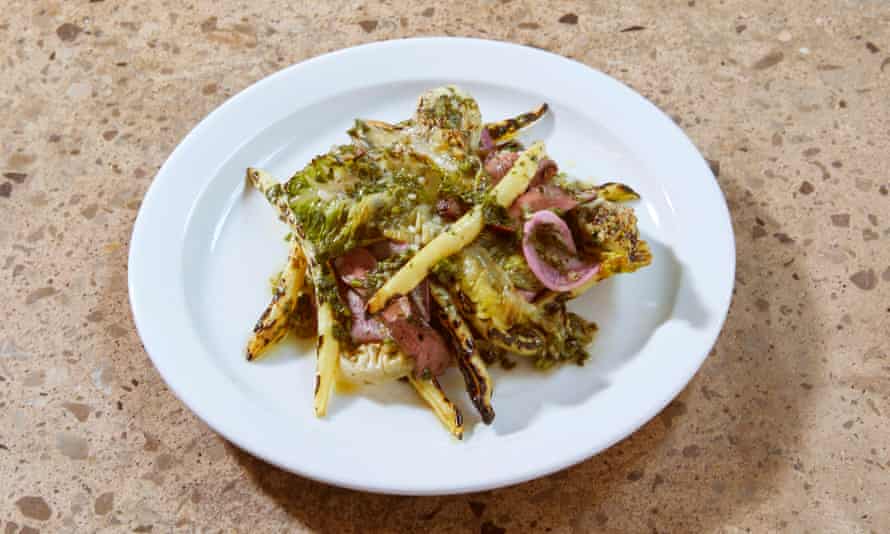 Erst is sibling to the small group of Trove bakeries, which started in Levenshulme in 2011, and quickly garnered a following for their ways with sourdough. Those baking chops become apparent in a sizeable disc of still-hot flatbread which isn’t flat at all. On the grill it has bulged and expanded, blistered and broken. It is spread with freshly chopped tomato pulp, grassy olive oil and a knuckle-crack of garlic. It is the very best take on that old Spanish stager pan con tomate. It manages to be crisp and soft, sour and mellow all at the same time. It is the best £5 I have spent in a very long time. Alongside it, we have ordered meaty Cantabrian anchovies, floating on their olive oil pond, with a generous dusting of chilli flakes. The anchovies find their way on to the bread. We stop talking to each other, except to mutter: “This is bloody good, isn’t it.” That’s a statement, not a question, and is met with the reply: “Very.” 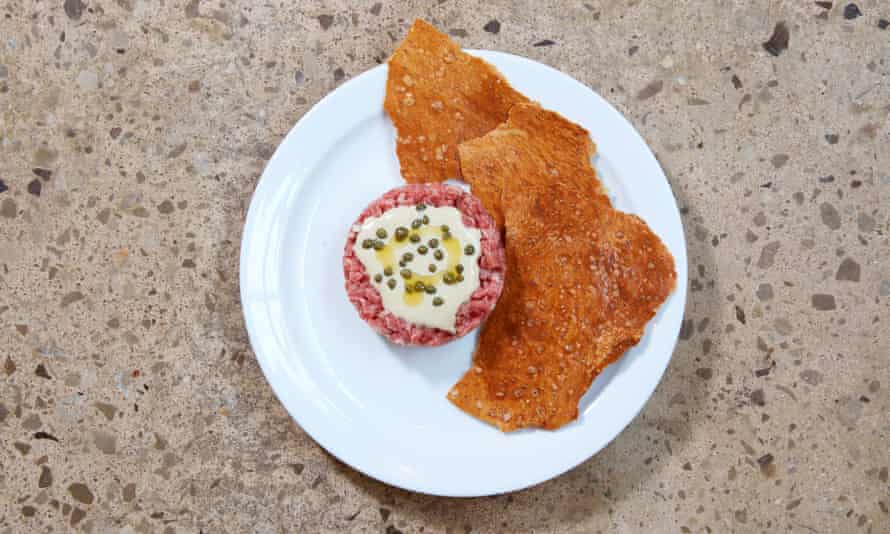 We tell our waiter we’d like another. He reminds us that we’ve already ordered the other version, which comes brushed fatly with garlic herb butter, with a quenelle of bright white whipped lardo on the side. I spread it across the hot bread and watch it melt into the crevices. It’s dripping toast, but as rebooted by Hollywood. It’s the George Clooney of garlic breads: elegant, sophisticated, but with substance underpinning the gloss and shimmer. See how good it is? It’s forced me to type utter blathering, enthusiastic bollocks.

We have the thinnest slices of raw sea bass, cured in an acidulated dressing punched up with fermented chilli and decorated with rings of cherry tomato. It’s vigorous and achingly fresh as if it’s only just been fetched from the surf. Next up, a rough-cut steak tartare is topped with a fat dollop of the sauce that’s the key ingredient of vitello tonnato (essentially a mayonnaise blitzed with tuna, anchovies and capers). It is such a smart idea I don’t know why I haven’t encountered it before. In vitello tonnato the sauce lubricates slices of veal. Why can’t it do the same job with steak tartare? For scooping purposes there are shards of the crispest cracker. Both of these plates are £12. We finish this sequence with a heaped salad of finely sliced lamb’s hearts, pink at the eye, with lettuce, grilled green beans and what’s billed as a green chilli sauce. That dressing is a little bullying – and that’s the best I can manage by way of criticism. 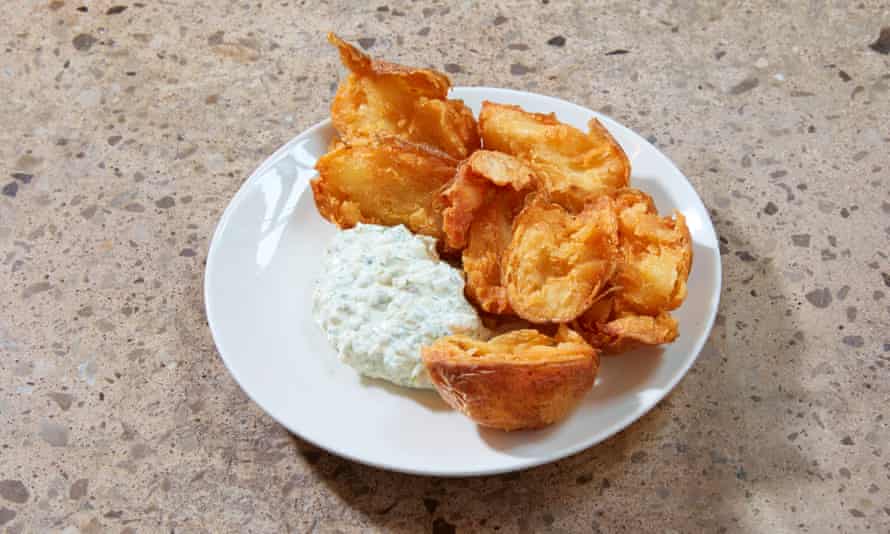 ‘Look at them. Seriously, look at them’: crispy potatoes. Photograph: Shaw & Shaw/The Observer

Because, oh look, here come the fried potatoes. Seriously, look at them: baked potatoes that have then been crushed with force until they are a mess of crevices and edges and folds. Next, they have been deep fried with intent until they are the golden-brown of dry maple leaves in autumn. We break off one bit after another. Somewhere in the middle there might be soft potato. Mostly they are just the thrilling business end of crispness right to the heart. With them is a wild garlic tartare sauce. It is £5 worth of glorious, crowd-pleasing fun.

This continues with the desserts which, on that barely populated piece of paper, offer little, but which on the plate deliver so much. There is a bay leaf panna cotta with nectarines. The texture, like the very best clotted cream, is perfect. The flavouring, just a hushabye of bay, is spot on. And then there is a lemon sorbet, a bellow of zest and juice and sugar, served at the point when a scoop melts immediately to nothing on the tongue leaving only the lightest fizz of happiness. 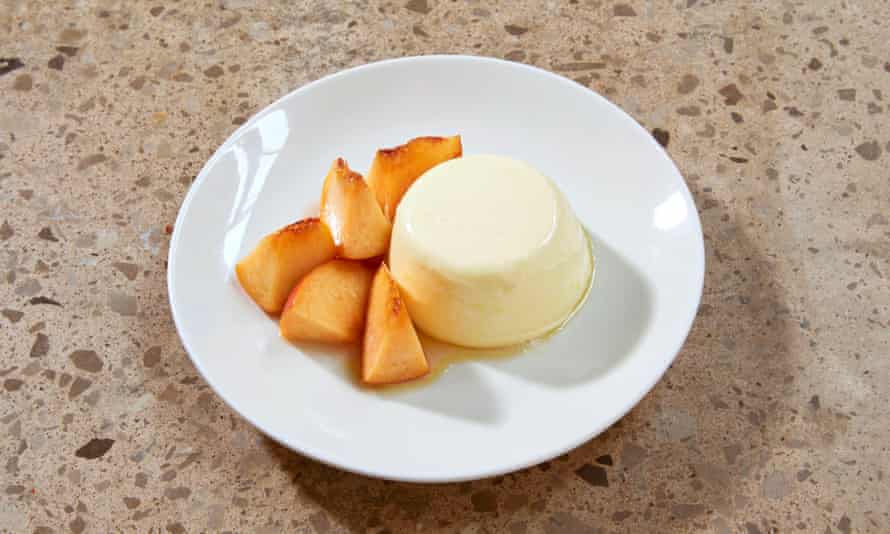 Erst describes itself as “a natural wine bar and restaurant”. Our waiter, one of the owners, has noted my recent rant about the offering at Mangal 2. I tell him that my objection is not to low-intervention wines per se. It’s to nasty, cloudy wines that smell of unwiped arse; the ones the truly dedicated natural wine fans seem to celebrate most ardently. He acknowledges the point, and directs us to a lovely crisp, dry Valdibella from Sicily for £30 which has no top notes of latrine.

At the end he offers us a glass of a low-intervention dessert wine. It is delicious, full of honeyed tones, dried fruits and the deep waft of Christmas. What matters is not ideology but whether the wine is any good. And with that inside us, what had at first seemed an austere space of glass and stone, of metal and nerdiness, had instead become somewhere of soft edges, warm intent and, most importantly, terrific food. The eerily quiet promise of that tiny, sparse menu has been kept.

Every year in November and December, the charity StreetSmart raises money for charities and projects tackling homelessness through the addition of a single £1 (after service and VAT) to each table’s bill in participating restaurants. Last year they raised a much needed £180,000, but that was down from £760,000 the year before, due to the fall in restaurant trade as a result of Covid. At the same time the challenge of homelessness has risen, so they need the 2021 campaign to be a big one. To find out more as a diner or, even more importantly, to participate in the campaign as a restaurant, visit streetsmart.org.uk.

And it’s goodbye to the American vegan fast-food chain By Chloe. A couple of weeks ago it closed all four of its London outposts. By Chloe was originally opened by chef Chloe Coscarelli in New York in 2015, and was quickly a huge success with queues down the street. It opened in London, its first venture outside the US, in 2018.

And an opening. The Breakfast Club, which still has queues down the street at the original Soho branch for its line in solid comfort food and in particular, its full English, is to open its 13th outpost. The new Chelmsford Breakfast Club will be only the third outside London after Brighton and Oxford. At thebreakfastclubcafes.com.

Jay Rayner’s Chewing The Fat: Tasting Notes from a Greedy Life, is out now. Buy it for £4.99 at guardianbookshop.com

When is the winter fuel allowance paid and who is eligible?

I was seeing a man for a few months. Why am I so heartbroken? | Relationships