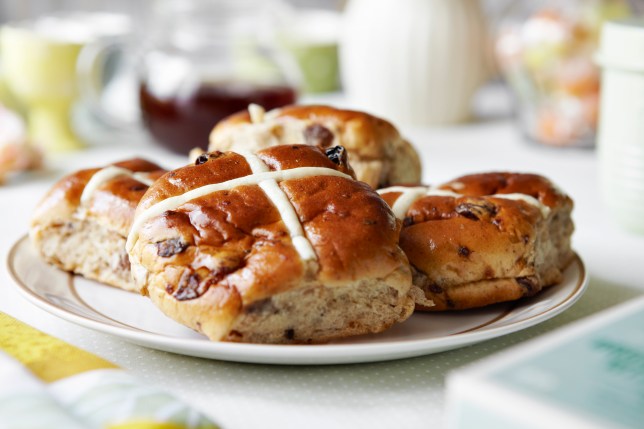 It wouldn’t be Easter without a hot cross bun or two (or three).

The sticky cinnamon goodies have been a springtime staple in the UK and some parts of the Commonwealth such as Canada and Australia for hundreds of years.

But why do we eat these raisin-packed rolls at Easter, and what are the famous superstitions associated with them?

Why do we eat hot cross buns at Easter?

The tradition of baking bread marked with a cross is linked to paganism.

The pagan Saxons would bake cross buns at the beginning of spring in honour of the goddess Eostre – which is widely believed to be the origin of the name Easter. 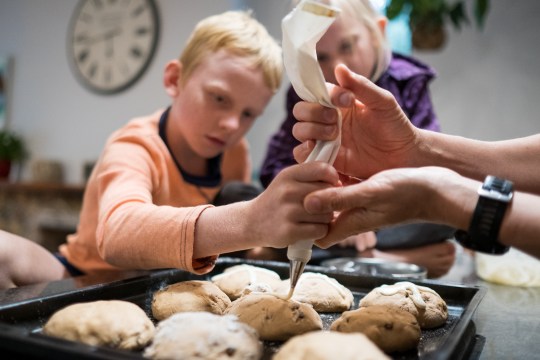 The cross was a symbol of the rebirth of the world after winter, and the four quarters represented the four seasons.

The Christians saw the cross shape and adopted the baked good as a symbol of the resurrection of Christ, who died on a cross.

The first recorded reference to hot cross buns was in Poor Robin’s Almanac in the early 1700s: ‘Good Friday come this month, the old woman runs. With one or two a penny hot cross buns.’

What are some hot cross bun superstitions?

Hot cross buns are the subject of many superstitions.

According to English folklore, buns baked and served on Good Friday will not grow mouldy for a whole year.

It is also said that hot cross buns can be used for medicinal purposes, and should be given to the sick.

Hot cross buns are said to protect against shipwreck, and so sailors would often bring them on voyages.

If hung in the kitchen, they are said to protect against fires – the hanging bun is replaced each year.

What is the hot cross bun rhyme?

The nursery rhyme was first published in a book called the Christmas Box in London, 1798.

It was often sung by street vendors selling buns around Easter time.

The famous rhyme goes as follows: