A chef has revealed his secret to cooking the perfect steak – by using a toaster.

Craig Harker, 33, decided to give this viral hack a go by buying a cheap toaster and throwing some different cuts of steak in to see how they turned out.

Craig, owner of The George Pub and Grill in Stockton-on-Tees, Durham, shared the pictures on their Facebook page, as shocked customers wondered how he managed it.

‘I tested it out first with a rump steak to get the settings right; I seasoned it as I normally would because if it’s seasoned well, you might still get a good steak,’ says Craig.

The chef then put it in the toaster for a few minutes until it came out medium-rare. 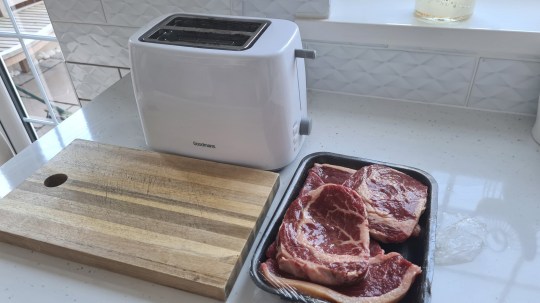 First, he seasoned the steak as he would normally. (Picture: Caters News Agency)

Craig was in for a shock when he tried it as he claimed it tasted just as good as it normally would if he had fried it.

Craig, who is still offering a takeaway service, says: ‘I had seen it online and thought there is no way you can cook a steak in the toaster so I had to try it out for myself because I know how to cook a good steak.

‘I played around with the settings on the side and the first one popped up too rare so I put it down for a second time but then we overcooked it. 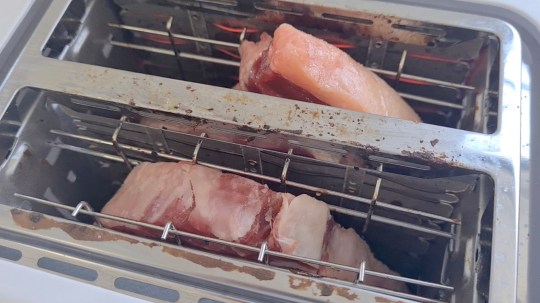 ‘It was trial and error but when we put the third steak down, it came out medium rare and was pink in the middle but well done on the outside.

‘It tasted really nice and was red hot; if someone doesn’t know how to cook a good steak just whack it in the toaster.

‘I won’t be serving it to anyone but it’s fun to show people.’ 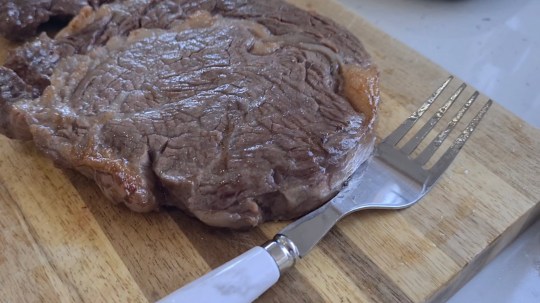 Despite lockdown causing Craig’s business to shut, their takeaway service has been busier than ever meaning he’s looking to expand.

‘We do takeaways and deliveries and we’re lucky that our customers are being really loyal to us,’ adds Craig.

‘The reaction to the steak online was amazing; we have a big following on Facebook but I did warn people not to try it at home.

‘I didn’t expect for it to work at all.

‘You always see these videos floating about online but I was shocked that it came out restaurant quality.’

Craig isn’t the only person to experiment with toaster cooking, another creative foodie used the appliance to warm up leftover pizza.

What is my moon sign and what does it mean?