SunSport top tipster Templegate has gone through the big races on TV with a pick in each. 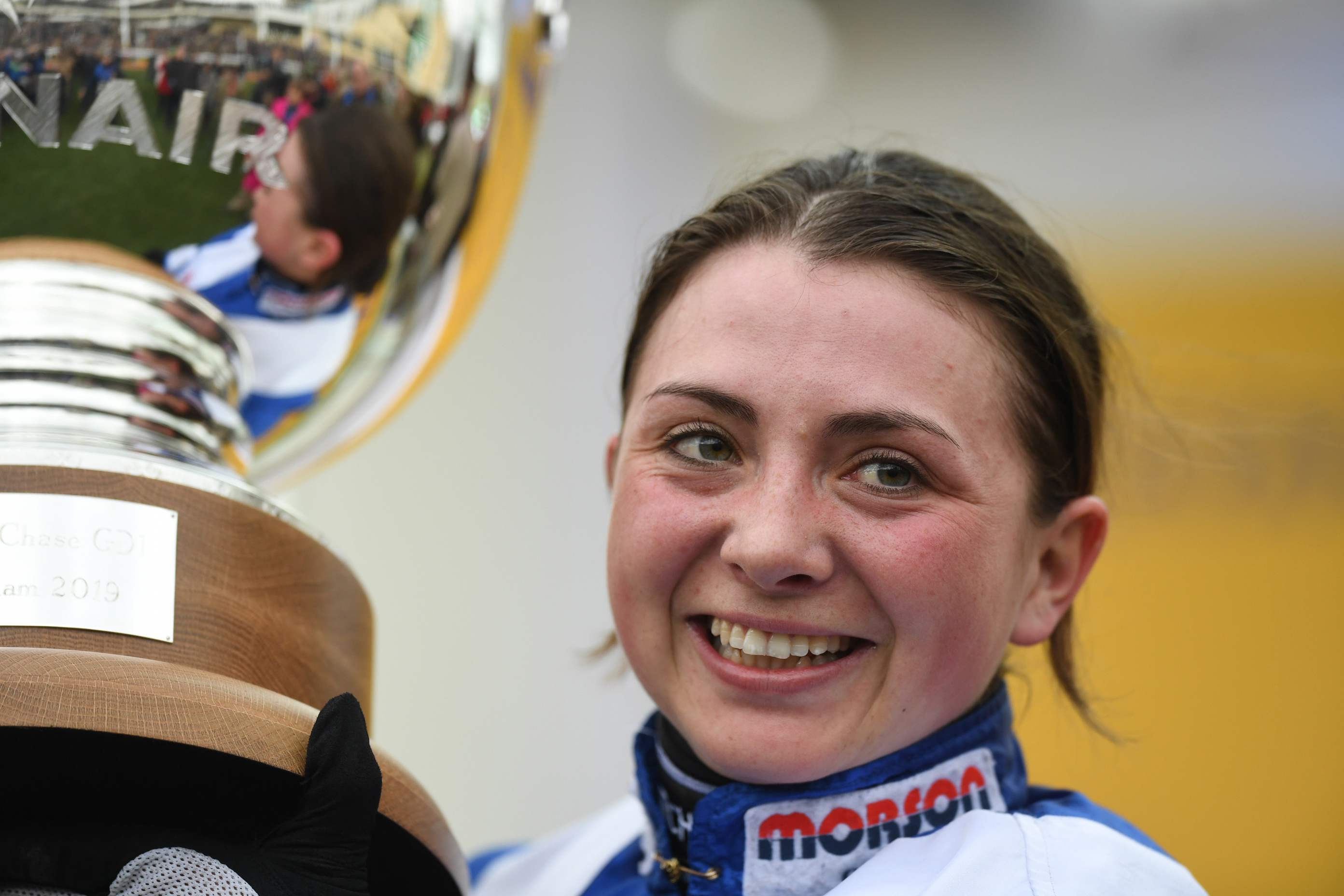 The action gets underway at 1pm on ITV4 and there will be three hours of coverage.

She was right in the mix with Paisley Park and Thyme Hill until the dying yards. Testing ground is ideal and the opposition looks a lot softer today.

Magic Of Light is looking for a hat-trick of wins in this race and Jessica Harrington’s raiders are always respected. She had almost five lengths in hand last year and showed her wellbeing with a convincing Newbury win over fences last time. Soft ground is no problem but she wouldn’t want it absolutely bottomless.

Eglantine Du Seuil has had three runs now for Paul Nicholls since moving from Willie Mullins. She has gradually improved each time but still looks a fair way off the form of her 2019 Cheltenham Festival win. All her victories have come in quicker conditions and she’s not guaranteed to see out this longer trip.

The other two look well short of this level. Midnight Tune has been chasing so may show more back over the smaller obstacles but is hard to fancy.

He saw out this trip well there on just his third run over hurdles. Trainer Sam Thomas is in good form and Jordan Nailor takes off a valuable 5lb which could make all the difference.

Danny Kirwan didn’t stay three miles at Cheltenham last month after winning nicely over course and distance. He is another who has been given a chance by the handicapper and has a good record at Ascot.

Janika is a top-class chaser who is having just his second hurdles run in the UK. If he matches his form over fences he won’t be far away but may need this comeback.

Arrivederci looks a top prospect before taking a tumble at Haydock two starts ago. He was poor coming back from that shock here last time. The form of last year’s Wetherby and Wincanton wins would give him every chance.

Kateson got the job done well at Aintree last time and can’t be discounted from just 5lb higher in the weights.

Dans Le Vent battled well to score at Hereford and deserves this crack at stronger company. Nicky Henderson’s Craigneiche is back from a long break and has more to offer.

ESPOIR DE GUYE loves Ascot and has shown all his best form over this distance.

That was the case two runs ago when he battled well to score in a similar contest to this. Venetia Williams then stepped him up in distance and class for the Silver Cup which proved a bridge too far. This is a much more suitable test and one he can pass.

Jerrysback returns from a long break but was a good third here the last time he saw a racetrack. He can make mistakes but likes it soft and has valid place claims.

Dashel Drasher won a small-field contest nicely here last month and will enjoy these conditions. The handicapper has been a little harsh but he should be thereabouts.

Bennys King won by six lengths in the mud here last time and sees out this longer trip well. He is climbing the weights but can’t be ignored from 9lb higher than his second in this 12 months ago.

Good Boy Bobby ran a cracker in the Caspian Caviar Gold Cup at Cheltenham last month. He was fourth there and looks well handicapped.

POLITOLOGUE can make it three Grade 1 wins in a row.

Paul Nicholls’ admirable chaser pulled off a slight surprise when beating hotpot Defi Du Seuil in the Champion Chase last March but showed that was no fluke when taking the Tingle Creek at Sandown by an impressive seven lengths. He goes on soft ground and loves this trip. He has winning form at Ascot, which doesn’t suit all horses, and it will take a big effort to stop him.

The real Defi Du Seuil would have a big chance but he’s been worryingly poor on his past two runs.

He won this 12 months ago before that puzzling effort at the Festival where he never went a yard. His comeback in the Shloer Chase has the alarm bells ringing as he was well backed before stopping quickly before three out. You’d want to see something like his old form before backing him again.

Waiting Patiently looks the bigger threat today after his excellent second in the King George on Boxing Day. He gave Frodon too much rope but was catching him come the line and saw out the three miles strongly. He was just a length off Politologue over this trip in the Tingle Creek and it could be tight again.

First Flow is rising through the handicap ranks and won well here two runs ago. He could hit the frame if any of the big three falter.

MINELLA DRAMA was impressive when winning easily at Bangor last time out.

The ground was bottomless in Wales that day so he should have no problem handling what will be very testing conditions. He gave the impression that there was a lot left in the tank, which can help him get home up the Haydock straight.

Llandinabo Lad looks a huge danger after going close in an Ascot Grade 2 last month. He boxed on well into second there and looks up to winning at this level. He’s another with a Bangor win on the CV and he followed that by taking a Listed contest here on soft ground. That means he has to give 5lb away but the Tom Symonds horses continue to fire and he won’t be far away.

Anythingforlove has won four of her five starts including by almost ten lengths at Catterick at Christmas. This is tougher but he’s on the upgrade and has won on heavy.

Nada To Prada jumped beautifully when winning a Listed race in testing ground here last month. She is proven over a little further and that stamina will be useful.

Faivoir is another with a shout after an improved effort to score at Ludlow. He is another who is right at home in the mud.

Staying will be the name of the game here and that gives big-priced SMOOTH STEPPER every chance.

His last visit to Haydock saw him win the Grade 3 Grand National Trial over a bit further than today’s trip. It was bottomless that day too and he kept powering on to beat a useful field that included Yala Enki and Welsh National second The Two Amigos.

He is fit from jumping round the Aintree fences in the Becher Chase and is only 4lb higher in the weights. Mudlark Royal Pagaille was impressive when scoring over three miles at Kempton’s Christmas meeting.

The handicapper was watching and has upped him 16lb but it’s early days with Venetia Williams and there should be more improvement to come.

Sam Brown has classy form over shorter, including around here. He ran well at Carlisle last time out in November and shapes like he’ll stay further.

Sam’s Adventure has shown his best form in the mud as he showed when taking the Tommy Whittle here last time. The handicapper hasn’t gone mad after that and he’s got every chance.

Potters Legend is another who likes it here and stays all day. He wasn’t beaten far at Sandown last time and has place claims.

BUVEUR D’AIR should have too much class for his two rivals — but he has a point to prove coming back from 420 days off.

The last time we saw him he sustained a nasty injury after flattening a hurdle when second in the Fighting Fifth at Newcastle.

Trainer Nicky Henderson is peaking his dual Champion Hurdler for Cheltenham rather than today but you’d have to hope he could beat Ballyandy if he’s to land a hat-trick in March. He has winning form at Haydock and in heavy ground so there should be no excuses on that score.

Ballyandy won this race 12 months ago when coming from a mile back to get up on the line. He hasn’t scored since but was a good third at Grade 2 level last month before a distant third in Kempton’s Christmas Hurdle.

His stamina will be an asset but he would need to improve to beat a firing Buveur D’Air.

Navajo Pass won a decent handicap at Musselburgh on New Year’s Day. He likes heavy ground and stays further than this. He’s only five so should be on the upgrade but has a little to find with the other two.

YALA ENKI won this slog last year and can follow up under Bryony Frost.

She was on board in the Welsh National last time where Paul Nicholls’ stayer hit the places for the third year running. He likes to keep things simple from the front and would be giving weight away all round if this was a handicap. He came here after Chepstow 12 months ago so the shortish gap between races shouldn’t be a problem.

Al Roc is one to watch making his debut for Dr Newland. He was beaten just a length in a French Grade 2 last time. The yard has a good record with newcomers and he’ll be a threat if seeing out this longer distance.

If The Cap Fits was a good third in the prestigious Kauto Star Chase at Kempton on Boxing Day. That was despite his rider having to work hard for most of the contest. He looks a threat if able to repeat that effort.

Rock The Kasbah was smart a couple of seasons ago but hasn’t run since finishing second in this last year. He has gone well fresh before and could repeat that placing.

The Mighty Don makes too many mistakes to rely on as does Looksnowtlikebrian.

Sizing Codelco has been out of form for a long time and is hard to fancy.

You can buy a Cold War underground bunker in Cornwall for £25,000