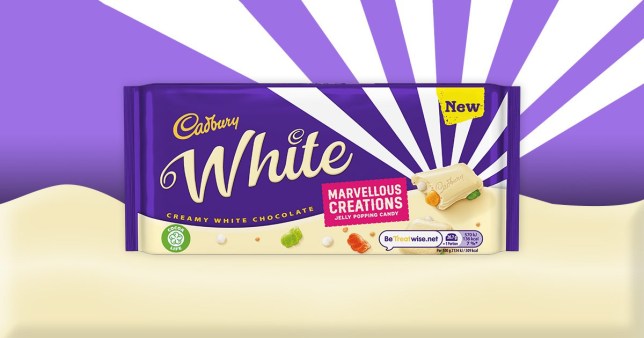 The original was a combination of milk chocolate, fruit-flavoured jelly, popping-candy and smarties-style pieces – but the brand is now releasing a white chocolate version.

From this week, you’ll be able to pick up Cadbury White Marvellous Creations exclusively in Asda this week – costing just £1.79 for 160g.

The pieces inside are similar – but they’ve switched out the smarties-style pieces for puffed rice.

It comes after Cadbury released other white chocolate bars and buttons in the last few years, which have proved to be popular.

An Asda spokesperson said the supermarket has noticed both white chocolate bars and the original Marvellous Creations bar growing in popularity.

The spokesperson explained: ‘White chocolate is the fastest growing mass with 35% increase in spend YOY in fact, £1 out of every £5 spent on White Chocolate in the total UK market is spent at Asda.

‘We are so excited to launch Cadbury White Marvellous Creations exclusively in Asda. The milk chocolate variant has such a cult following.  Its sales grew in Asda +62% YOY in 2020 so we expect the white chocolate to be just as popular.’

Instagram foodie page @NewFoodsUK shared news of the bar and gave some thoughts.

The post said: ‘We managed to get our hands on this! Filled with jelly pieces, rice crispies & popping candy – the perfect combo! 👌we love this bar – so delicious!’

Others were excited to give it a try.

One person tagged a friend at wrote: ‘You need to hunt this down tomorrow.’

Another added: ‘Wow we need to try this.’

Some said they were a little disappointed with the change.

‘Got some today & am so SO disappointed! They replaced the “smarties” with rice crisps. Why change the combo when you know it works?!’ one wrote.

Eight of the prettiest glamping spots in the UK