BROCK LESNAR won the Royal Rumble after losing his WWE Title to Bobby Lashley earlier in the night.

The former UFC king is heading to WrestleMania 38’s main event after his victory – 19 years after he first won the Rumble.

Brock Lesnar is heading to the main event of WrestleMania 38 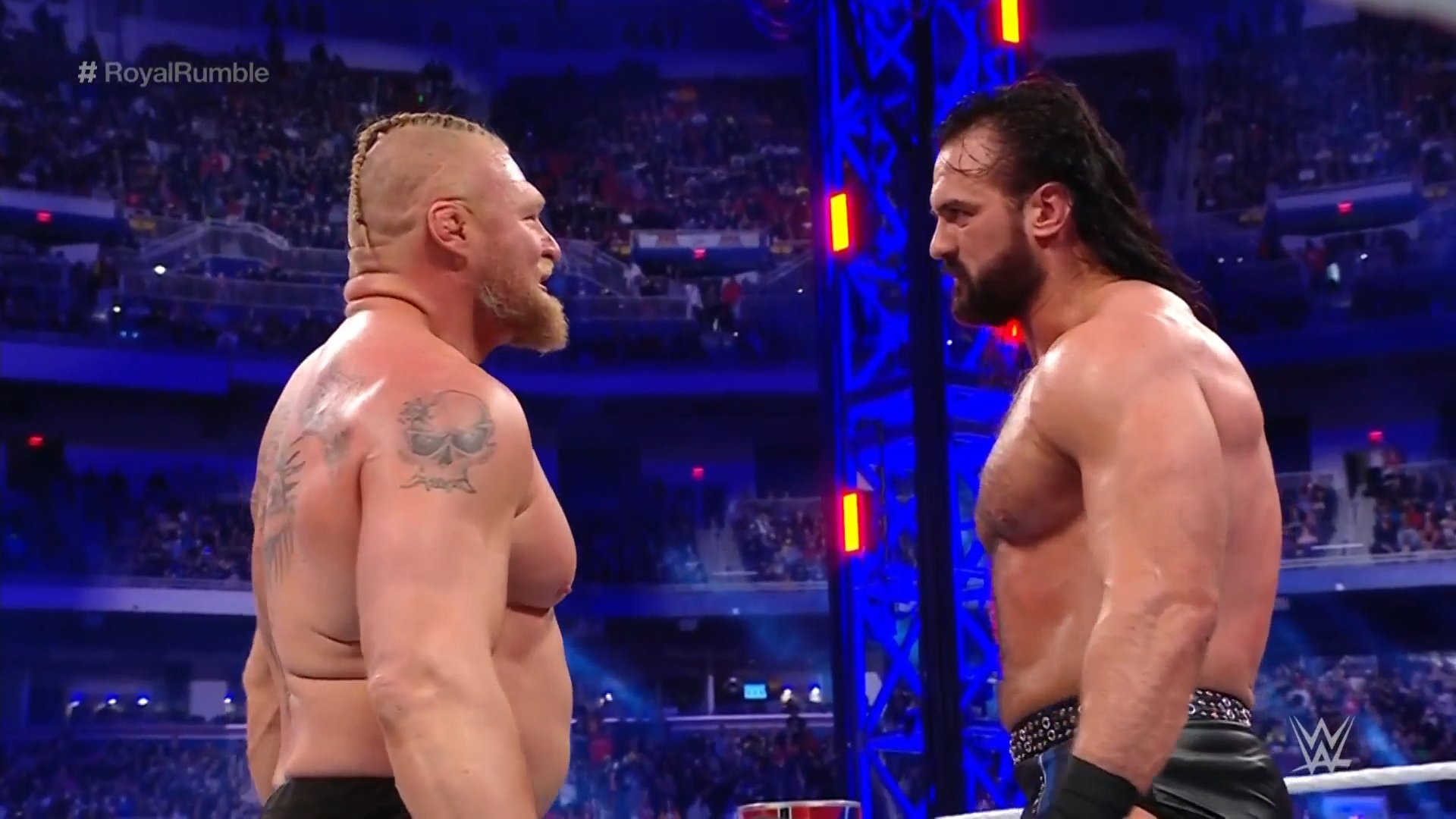 AJ Styles drew the short straw and started at number one with the Intercontinental Champion Shinsuke Nakamura second.

The two men battled it out until Austin Theory joined the action and Robert Roode soon joined the mix at number four.

But the Glorious one would not last long as he became the first man eliminated courtesy of Styles.

Englishman Ridge Holland made his Rumble debut as Nakamura was thrown out by Styles and it was Montez Ford of the Street Profits out at six.

US Title holder Damian Priest entered next with Sami Zayn following closely behind as the ring began to fill up.

Then it was the turn of Johnny Knoxville to make his Rumble appearance accompanied by his Jackass colleagues and he instantly attacked Zayn.

Styles then challenged him to punch him, which he duly obliged, before the Phenomenal One almost took his head off in retaliation.

Ford landed a frog splash from the top rope before Holland scooped Knoxville over the top and Zayn pounced to kick him out of the match.

But his joy was short lived as Styles then tipped him out as Angelo Dawkins joined partner Ford in the bout.

The giant Omos then entered at number 11 and he quickly eliminated both Street Profits prior to Ricochet emerging twelfth and Chad Gable at 13.

Priest tried to go toe-to-toe with Omos but found himself thrown out as the rest of the competitors joined forces to try and eliminate the huge man.

Dominik Mysterio came out to help, but it was Styles who provided the added punch that finally got the big guy out of there.

Happy Corbin emerged and got rid of Ricochet as we reached the halfway point of the Rumble.

Dolph Ziggler, entering his 15th Rumble, was next in just as Corbin eliminated Mysterio and Styles kicked out Theory.

Sheamus was out at No17 as his pal Holland was thrown out by Styles and then Rick Boogs joined the action and showed great strength to get rid of Gable one-handed.

Madcap Moss arrived to offer help to Corbin and they teamed up to throw Styles over the top rope followed shortly by Boogs.

Riddle was in at No20 but Moss and Corbin’s fun was over when Drew McIntyre returned from injury and eliminated both men.

Ex-Universal Champion Kevin Owens was next and instantly got into it with the Scottish Terminator as the legendary Rey Mysterio came in at No23.

Kofi Kingston danced out at No24 but was soon skipping back courtesy of KO.

Big Otis entered next with Big E following him at No26 and Grammy winning Latin recording artist Bad Bunny returned to the Rumble for a second year and he hit Riddle with a Canadian Destroyer.

The musician then suckered Sheamus in to eliminate him as Dolph Ziggler followed.

Shane McMahon made his first appearance in the ring since WrestleMania 37 and got rid of Owens while Otis eliminated Mysterio.

Next it was the iconic Randy Orton in as he and partner Riddle got rid of Big E and then Otis.

But there was a huge shock at No30 as Brock Lesnar, screwed earlier by Roman Reigns and Paul Heyman as he lost his WWE Title to Bobby Lashley, entered.

He eliminated Orton, Bad Bunny, Riddle and McMahon to leave just him and McIntyre left.

And despite the Scot’s best efforts, it was Lesnar who emerged triumphant to set-up a clash with Reigns at Mania.

How the killer 6-mile wide comet in ‘Don’t Look Up’ could be broken apart by nuclear explosives, two physicists explain