As friends, families and neighbours cook up a storm together for community street and garden parties across the four-day bank holiday weekend – which takes place from Thursday, June 2 to Sunday June 5 – one enduringly popular dish is sure to figure large at gatherings up and down the country.

The Queen recently met former Cordon Bleu student Angela Wood, who as a 19-year-old spent days perfecting the dish for the VIP luncheon. The original recipe differs from today’s incarnation, largely due to the impact of post-war rationing restrictions, and the limited availability of ingredients.

Consisting of boned young roasting chickens, water, red wine, apricots, salt, pepper and cream of curry sauce, it was served as part of a five-course feast to 350 foreign dignitaries in the Great Hall of Westminster School, accompanied by a crisp 1943 Moselle Brauneberger white wine and 1945 vintage Krug Champagne.

‘It was unique for a culinary institution to be selected to cater for such a prestigious occasion,’ said a spokesperson for the Cordon Bleu school, ‘and further invitations to cook for royalty came from the success of this event.’ 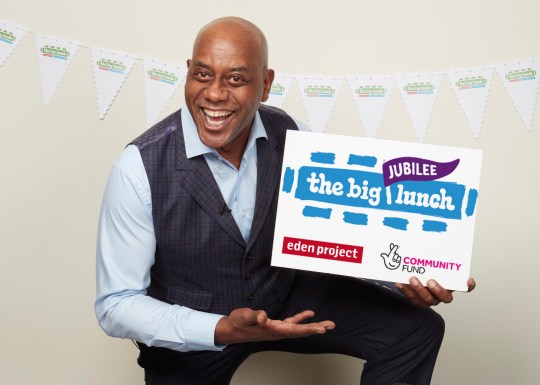 Ainsley Harriott is hoping more neighbours and communities than ever before join together (Picture: zero30media Ltd)

While other retro party dishes across the decades – think chicken à la King from the 1960s, cheese and pineapple sticks from the 1970s, vol-au-vents from the 1980s and 1990s favourites McCain oven chips – have seen their popularity decline, Coronation Chicken, which is often served with a rice and green pea salad, has remained one of the nation’s favourite party foods.

To make your celebration dishes fit for a royal, we’ve got Tom Kerridge, Tilly Ramsay, Nadia Sawalha and Great British Bake Off finalist Crystelle Pereira on board to share their favourite street party recipes.

Ainsley Harriott, a long-time ambassador of The Big Lunch, which is organised by the Eden Project and the National Lottery Community Fund, is hoping more neighbours and communities than ever before join together to share food, friendship and fun as they celebrate the Queen’s incredible 70-year reign.

‘The Big Jubilee Lunch is a great way for the whole nation to mark a historic moment,’ he says.

‘Food has always been the perfect way to bring people together and if there’s one thing we know how to do, it’s how to throw a right royal street party!

‘It’s exciting to think that millions of people will be coming together to celebrate over the Platinum Jubilee weekend. There’s never been a more important time to feel connected to our local communities so this is the perfect excuse to rustle up some tasty treats and get to know the neighbours better.

‘Everyone can join in The Big Jubilee Lunch this June – sign up now, what are you waiting for?’

Download a free Big Jubilee Lunch pack with invitations, posters, recipes and activities as well as a special letter of support for organisers from HM The Queen.