THIS is the moment an ambulance crashed into a car queueing for petrol as a paramedic tried to weave through traffic.

Video shows the ambulance trying to make its way through a line of cars waiting for petrol at a Shell station in Bromley, Greater London. 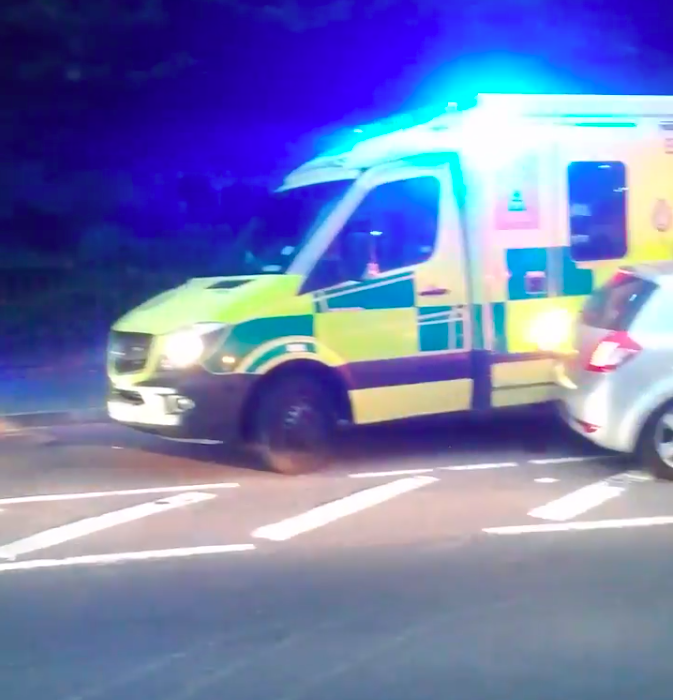 With its sirens blaring, the ambulance driver manages to slowly move the vehicle through the queue.

However, as the ambulance driver tries to squeeze it past the queue the vehicle hits the back of one of the cars.

The paramedic then had to stop and swap details with the other driver before rushing to the emergency.

It comes after a brawl erupted at an Esso fuel station, said to be between two dads and their sons, amid petrol shortage fears.

The four men traded blows during a shocking fight in the forecourt of the petrol station in Chichester, West Sussex, on Friday night.

The president of the AA Edmund King assured Brits there is “plenty of fuel at the source” and no need to panic buy, with a lack of lorry drivers being blamed for disruption to fuel supplies.

Meanwhile, two groups of men were seen “screaming” at each other before one group hurled stones as the other fled in a van at a Shell garage in Portsmouth,

Another driver told The News: “I witnessed a tussle on the forecourt between two groups of men, screaming and shouting at each other.

“One group got into their van and drove off out the city as the other group gave chase and hurled stones at the retreating van. Madness!”

It comes as drivers are set to be hit with a £30 limit on fuel after panic buyers queued at petrol stations across the country amid shortage fears.

Police have been forced to marshal motorists after they raced to forecourts to fill their tanks up.

And selfish drivers have started filling up jerry cans with fuel after queuing from the early hours of this morning.

Transporting petrol around in a car boot  also has the potential to turn your vehicle into a fireball, experts warned.

A Health and Safety Executive spokesman said: “It is a highly flammable liquid and can give off vapour which can easily be set on fire and when not handled safely has the potential to cause a serious fire and explosion.”

Simon Williams, RAC fuel spokesman, added: “If you are filling up six cans, you are potentially stopping the police, ambulance service and organisations such as ourselves who need to get to people in emergencies.”

The government has now urged drivers to “carry on as normal” amid the chaotic scenes.

And hundreds of petrol stations are now planning to impose a £30 fuel cap per driver to ensure everyone has a “fair chance to refuel” after an “unprecedented” scramble for fuel from drivers.

The EG Group, which has 341 petrol stations in the UK, confirmed the emergency services and lorry drivers would not be affected.