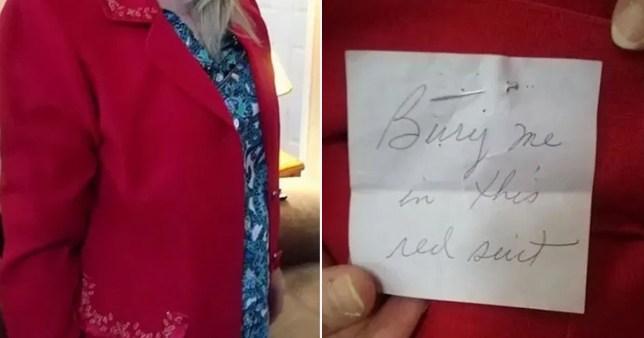 The note reads ‘Bury me in this red suit’ (Picture: Facebook)

Finding something you love that’s been preowned in a charity shop can be a great feeling.

Even better when there’s a sweet personal touch found among the item revealing some of its history, be it an airplane ticket wedged in a book, an old photo in a pocket, or even a love letter down the side of a bag.

But sometimes you might come across something unexpected and creepy – just as a woman named JoAnn did in Florida.

While thrift shopping she came across a ‘lovely’ red suit jacket, as her husband wrote on Facebook.

Though when she took the item home and looked at it more closely, she found it contained a note pinned to the pocket which reads: ‘Bury me in this suit’.

Taking to Facebook to share the uncomforting note, her husband has since been flooded with a mix of comments, shares and reactions.

Some thought the note was sad, with one person writing: ‘Why did that woman’s family do her dirty?!’

Others agreed it was ‘creepy’ and they ‘couldn’t wear it’ if they’d stumbled across that note, expressing sadness at the idea that the original owner’s family never saw the note themselves. 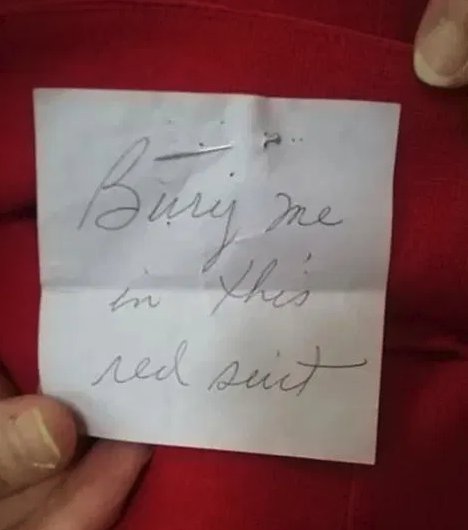 Someone suggested the previous owner may have changed dress sizes (Picture: Facebook)

Some people saw the lighter side though, with one joking: ‘Maybe there was another jacket with “Actually, bury me in this one instead”.’

‘You look very pretty in it so I’m glad there was a change in plans,’ another added.

One Facebook user had superstitious advice for JoAnn as the new owner of the jacket, suggesting she ‘cleanse all energy and spirits off that!

‘It is probably connected with something or someone and you probably don’t want to that around yourself.’

Another person, challenging the negative comments, wrote: ‘We don’t even know if the previous owner died.

‘Maybe she went up or down in size and decided she needed to pick a new burial outfit.’

The now viral post has seen hundreds chime in with their thoughts and ideas around what could have happened to the women who previously owned the jacket.

We probably won’t ever know.

It may seem eerie to some, but it looks as though the new owner is pretty happy with her thrift shopping.