It happens every Boxing Day. While much of Britain is still sleeping off the previous day’s excesses, or blearily stripping a turkey carcass, the queues start building for the Next sale.

Loyal online customers get VIP slots to preview the bargains online; for everyone else, it’s shivering outside the shop at dawn. Even when Covid plunged Leicester into tier 3 restrictions last year, a masked and distanced line of about 200 still formed outside the city’s flagship store before 6am.

Retail seems easy and is actually very complicated. It’s highly sophisticated, and Next is extraordinarily good at it

Not everyone will grasp the appeal of camping out in the cold just to shop at Next, yet the chain clearly holds a special place in British hearts. In an otherwise rotten year for a high street crippled by lockdowns, it was a rare success story; it’s now the UK’s biggest online clothing retailer, announcing this spring that online sales were up 60% from 2019, and next year it celebrates 40 years on the high street.

“Some people think it’s a complete mystery why Next is so successful when the clothes are unremarkable. There’s nothing wrong with them, but they are not remarkable,” says the veteran fashion industry writer Eric Musgrave, author of Sharp Suits and former editor of the trade magazine Drapers.

Yet, as he also points out, it has an unerring sense of what middle England wants: reliability, keen value and something for the whole family – men, women, children and a few bits for the house – all under one roof, although that roof may have moved from the high street to retail parks and increasingly now online. While fashion editors endlessly debated whether this leather trench or that must-have pink coat could help save Marks & Spencer, Next just quietly kept going, its forecast profits overtaking theirs back in 2014. Musgrave remembers George Davies, the maverick fashion entrepreneur who oversaw Next’s early years, once confiding that its secret was that “it took the department store market – because they were the ones aimed at Mrs Middle England. He said, ‘We took their breakfast because they let us.’”

If you left school in the 1980s, there’s a reasonable chance you bought your first proper work suit at Next. In the era of shoulder pads and power dressing, it spotted a gap in the market for young working women in their first jobs, who wanted to be taken seriously but didn’t want to dress like their mothers. (Launching the brand in 1982, Davies told Drapers with characteristic bluntness that his target customer was over 25 and seeking more than cheap and tatty teenage fashion: “For one thing, their clothes have to do more for them; it’s a fact that they can’t get away with wearing what teenagers do.”)

But it never claimed to be cutting edge, and nearly four decades later, it is if anything even more defiantly middle-of-the-road. The big fashion magazines rarely feature its clothes, and nor do young influencers showing off their #hauls on YouTube or Instagram. For basics, it’s undercut by Primark or the supermarket label George at Asda (launched by Davies after his acrimonious ousting from Next in 1988), while brands such as Zara have muscled in on young women’s work wardrobes. Yet Next remains the tortoise that outran the hares, thriving in a year that saw big names such as Topshop and Debenhams collapse. 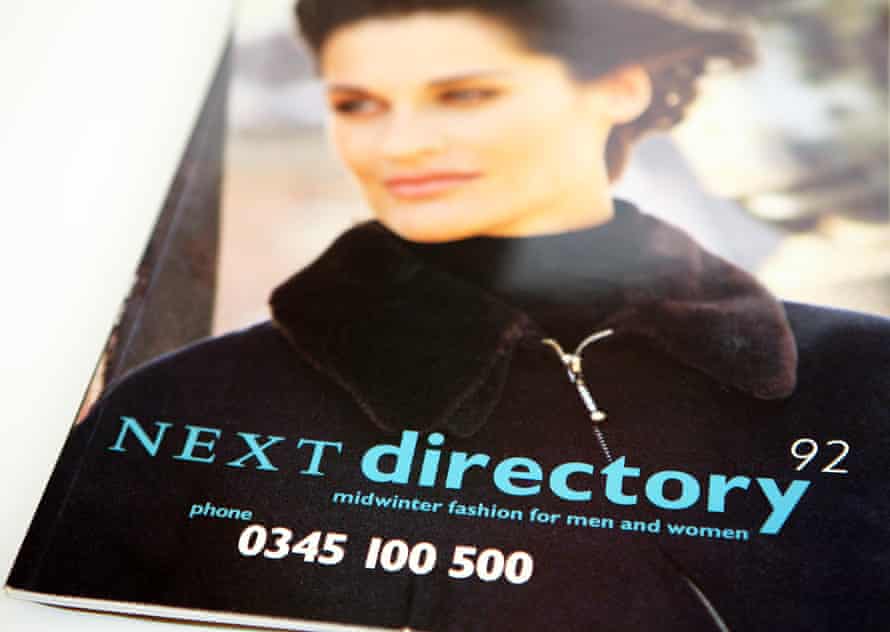 The Next directory made catalogue shopping glamorous. Photograph: Alamy

Next’s real strength is in working out exactly what its customer needs, and how to get it to them quickly, even when supply and distribution lines are chaotically disrupted. “Retail is one of those things in life that seems dead easy and is actually very, very complicated,” says analyst Richard Hyman, a former director of the retail intelligence company Mintel. “It’s got so many moving parts – think of managing all the stock, the journey it takes from factories into your distribution warehouses, and then to be at the place where the demand is going to unfold. It’s a highly sophisticated process, and they’re extraordinarily good at it.” The company may have done well in lockdown, he says – thanks to its strong homewares division, it was arguably better positioned than high-fashion brands for a time when much of Britain resorted to living in tracksuit bottoms and spending their money on cushions – but only because they were doing well before it, for reasons partly rooted in its early history.

Next was born in 1982, after the men’s ready-to-wear suiting chain Hepworths, founded in 1864 by the Leeds tailor Joseph Hepworth, bought the womenswear chain Kendall and Sons and set about reinventing it. The early stores were sleekly designed, laying the clothes out so customers could see what went with what. “They did the work for you of putting the outfits together. I know it sounds incredible that that was new and different, but it was then,” says Musgrave. Two years later came Next for Men, followed by offshoots for children and home, but the gamechanger was the company’s mail-order arm, Next Directory, which in 1988 transformed the once dreary idea of catalogue shopping into something positively glamorous.

The supermodels Naomi Campbell and Yasmin Le Bon modelled for it, and there were real fabric swatches attached to its stiff glossy pages – although that didn’t last. “It was a great thing to do, but faintly ridiculous when you’ve got hundreds of thousands of them and it all had to be stuck on by hand. The first [edition] nearly didn’t get out because they hadn’t realised how long it would take,” recalls Musgrave. But most miraculously of all, in the days before Asos and Amazon, Next Directory let you order a dress from your sofa and be wearing it within days. The warehousing, distribution, credit and logistics operations Next created in the 80s to fulfil those orders put it miles ahead of its rivals when high-street shopping started moving online – but it’s how the company later leveraged that infrastructure advantage that matters.

Click on to next.co.uk today and you’ll find dozens of apparent competitor brands all hosted under its online roof, from teen-friendly labels North Face, Under Armour and Superdry to middle-class favourites Joules and Boden. Scan the list of names it sells – Clinique skincare, Mac makeup, GHD hair straighteners, Smiggle stationery, Lego toys – and it’s clear Next online is starting to resemble a kind of online department store or mini Amazon, a one-stop shop for everything from school uniform to sofas. And increasingly it’s where once-loved brands that struggled to stay afloat on the high street, from Orla Kiely and Monsoon to Victoria’s Secret, live on. If the future of retail for many is online, that future is increasingly accumulating under Next’s roof. 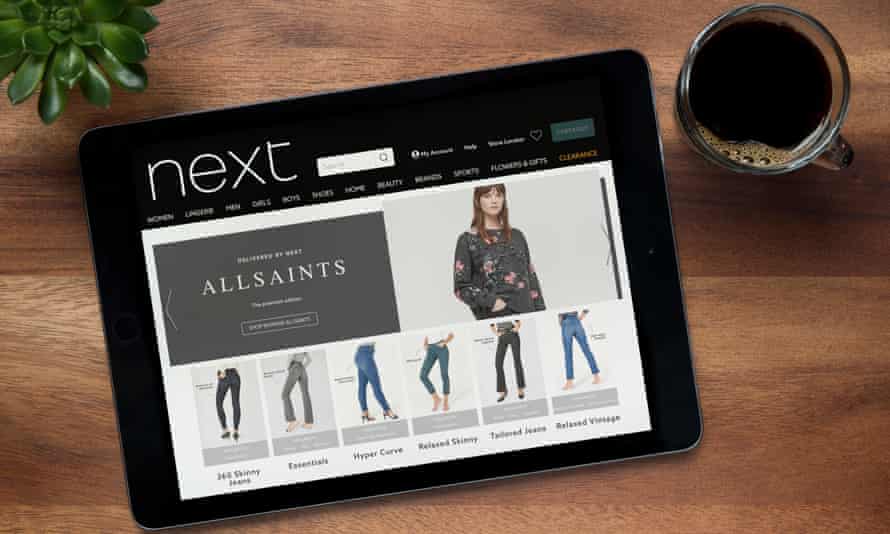 You can buy brands from All Saints to Superdry though Next’s website. Photograph: Alamy

All this stems from a concept its CEO Simon Wolfson started developing five years ago, after reflecting on what the brand’s real competitive advantages were. “That infrastructure was what most people would have given their right hands for and he started thinking, ‘What if I made it available to anyone who wanted it?’” says Hyman. “Obviously that posed the risk of inviting your competitors into your own back yard, but he determined that the net effect of all that would be far more positive.” Now, under its Total Platform concept, smaller brands pay for access to Next’s online logistics and back-end operating systems; in return, they draw more traffic to its site. And while Next sometimes takes a significant stake in partner brands – it recently bought 25% of Reiss, the womenswear label once favoured by a young Duchess of Cambridge – they retain independence of management. The service is highly profitable, solving the mystery of how the company is thriving even if its bricks-and-mortar stores may have seen better days. “The platform has been driving a totally disproportionate percentage of Next’s sales growth,” says Hyman. And key to its success, he argues, is the character of the man behind it all.

Simon Wolfson started out at Next on the shop floor in Kensington, but he was no ordinary sales assistant. His father, David, was chairman of the company, and when the younger Wolfson was appointed CEO in 2001 aged just 33, some in the City cried nepotism. The company’s subsequent success and his unassuming manner have, however, helped to silence the critics. “He’s just known as Simon around the office – you see him wandering about saying hello,” says Musgrave. “He’s not aloof.”

Hyman, who has known him for decades, describes him as an unusual combination of strategically far-sighted and highly pragmatic, with a knack for working collaboratively. “Everyone’s got an ego, but I would say that his doesn’t get in the way of his role as CEO, and actually that’s quite rare in business.” Retail bosses who bemoan the hard deals struck by Amazon or department store chains in which they have concessions don’t complain about Next’s operation in the same way, he says: “I think doing business with them is quite straightforward. That doesn’t mean they’re not hard or uncompromising, but they leave something on the table for the other guy.”

Privately educated at Radley and then at Cambridge, Wolfson lives between a 17th-century country home near Milton Keynes and a townhouse in Primrose Hill, north London. Unlike some retail tycoons, he doesn’t flaunt his wealth on superyachts and at flashy parties; his slightly nerdy passions outside work are Tudor history and the eponymous economics prize he endowed to reward pragmatic policy ideas. (This year’s is for ways to improve hospital care post-Covid.) Yet he wields considerable influence in both the City and politics. 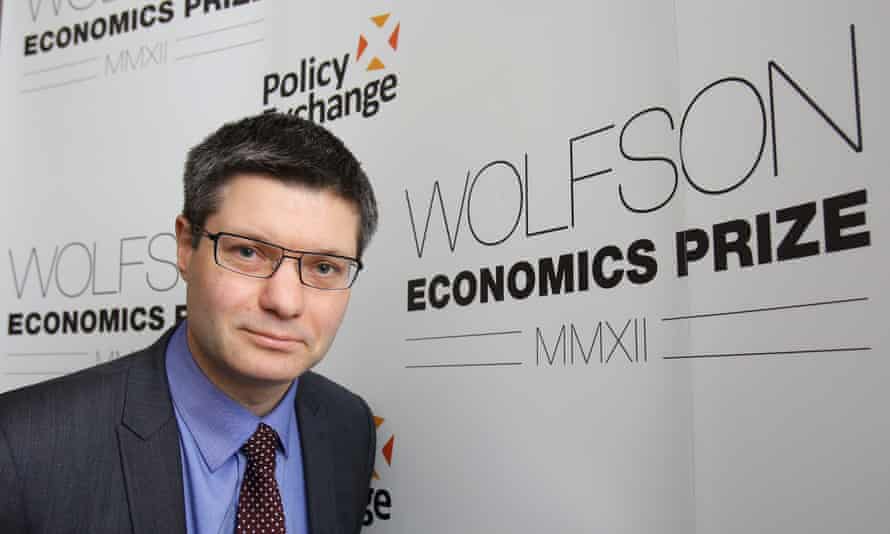 Like his father, who was an unpaid chief of staff to Margaret Thatcher in her early days in Downing Street, Wolfson is a Conservative party donor and well-connected politically. He met his wife, Eleanor Shawcross, while she was working as an aide to his friend George Osborne, and advised David Cameron (who later ennobled him) on economic policy in opposition. As a leading Brexiter, his insistence that a no-deal Brexit would cause only “mild disruption” also gave Boris Johnson’s government cover at a tense time in negotiations. There has long been speculation that he might move into politics full-time, yet this August he marks 20 years as CEO of Next.

Those years have not been without controversy, hinting at what insiders say is a culture of relentless efficiency behind the scenes. Wolfson has been attacked for the disparity between his CEO’s salary and that of shop-floor staff. (He waived his right to seven-figure bonuses in 2013 and 2014, sharing them out company-wide across the staff instead, but was heavily criticised by unions for taking home £4.6m in 2013 while declining to pay junior shop-floor staff a proper living – as opposed to minimum – wage.) But he has never generated the kind of scandal surrounding Sports Direct’s Mike Ashley or former Arcadia boss Sir Philip Green. And while Next has arguably been slower than some millennial brands to engage with climate-conscious arguments against fast fashion, Hyman thinks its typical customer is a “relatively late adopter” on such issues, who wouldn’t expect Next to be a pioneer.

That’s consistent with the history of a brand that will never be radical enough for some, but has made a fortune from knowing its customer. In corporate life as in fashion, it treads a middle way – neither red-hot nor cold, and never trying to be what it isn’t. Come Boxing Day, expect the queues to form again.