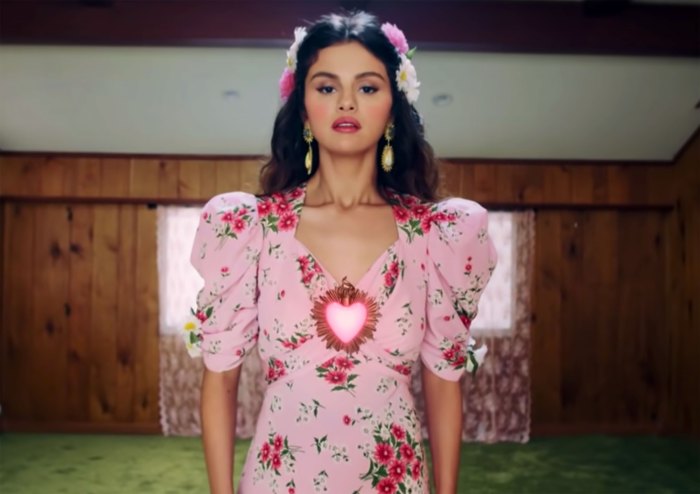 More than meets the eye! Selena Gomez dazzled in her “De Una Vez” music video. But there’s more to the wardrobe choice than one might think.

Throughout the nearly 3-minute clip, the former Disney Channel star wears a floral pink Rodarte dress with puffed sleeves. In fact, the frock pretty much serves as the focal point throughout the entire video. But it’s not just beautiful to look at, it also carries a bit of significance.

According to Verduzco, the flowery print is a nod to the iconic Mexican painter Frida Kahlo. Meanwhile, Gomez’s standout jewelry was created by the talented Mexican jewelry designer Daniela Villegas.

“We wanted to have these connections, to create this look, and to play with the amazing flowers the way Frida did, but making it modern and cool for right now,” Verduzco told Vogue. “The flowers on the dress, hair, and within the video all connect with this idea of renewal.”

The Rare Beauty founder also opens up with Vogue about the weight and meaning behind her new single. “[It’s] such a beautiful song and I think it has a very powerful meaning behind it for anyone who has had their heart broken,” she told the publication. “We all have the pain and the scars from various experiences we go through in life, but it’s really how we heal ourselves. Not only is it about leaving the past behind and forgiveness, but more importantly, it’s also about strength, moving forward, and starting your next chapter.”

Her fans were quick to link the song to her relationship with Justin Bieber. People took to Twitter to speculate. “Selena Gomez singing songs about Justin in Spanish so Justin can’t understand it smh,” one person wrote, while a second fan asked, “Is it just me or is #DeUnaVez by Selena Gomez yet another song about Justin Bieber?”

Though we double she’ll ever confirm or deny this, at least we know the meaning behind the fashion!