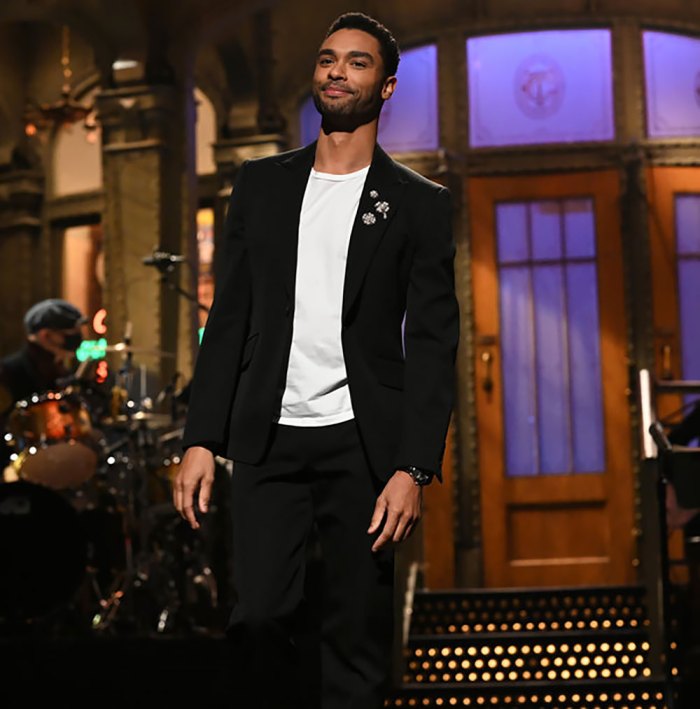 If you burn for the Duke of Hastings, there’s no question you’ll be heating up after watching Bridgerton star Regé-Jean Page take the stage during Saturday Night Live. The actor, 31, hosted SNL on Saturday, February 22 and his performance—and outfit—definitely didn’t disappoint.

Page was unquestionably fashion forward this past weekend. The star looked just as dapper as his Regency-era character, dressed in an Alexander McQueen getup that would definitely have Lady Whistledown’s seal of approval. He wore a single breasted, black suit jacket that was tailored to perfection. To give a little extra sparkle, a jeweled brooch was secured to the upper left lapel, made of wool. The jacket was paired with slim black trousers and an untucked, crisp white T-shirt. 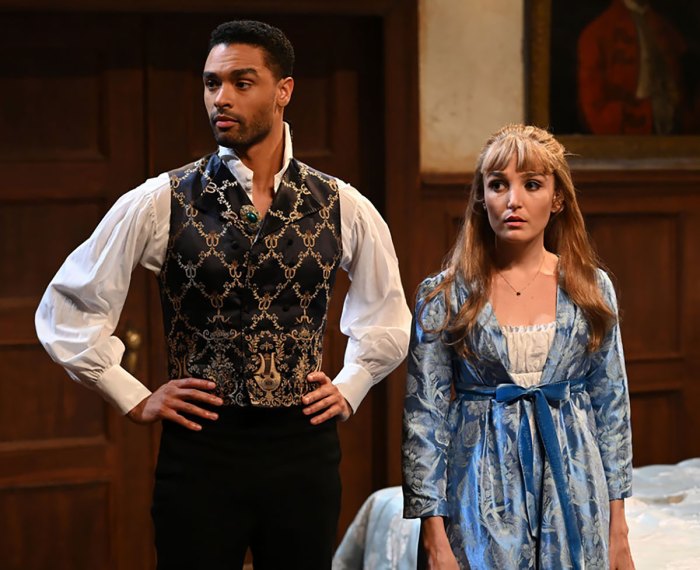 While Page can definitely rock a modern era ensemble, he proved that his style is equally as impressive when channeling his royal roots. For a sketch titled Intimacy Coordinator, Page swaped out his suit jacket in favor of the Duke’s signature white button down with a puff sleeve, embellished waistcoat and statement green brooch. In the skit, he teams up with Chloe Fineman, who plays Daphne Bridgerton, Pete Davidson and Alex Moffat to brainstorm the best way to approach Bridgerton’s notoriously steamy sex scenes.

If you weren’t already head over heels in love with the Duke, hearing the star’s opening skit will quickly make you swoon. That’s right, not only is he an impeccable dresser, but in his opening skit, the actor proved he can also hit all the high notes. “Ladies, I hate to break it to you, but I’m actually kind of a nerd. I nerd out on music, I sing silly little songs,” he says, transitioning into a sultry rendition of “Unchained Melody: by the Righteous Brothers.

Unfortunately, both on screen and in real life, Page is off the market. He’s married to Daphne (and a father!) in the Netflix series, and in recent weeks it seems that Page has cozied up with a new girlfriend. On Saturday, February 13, he was spotted with Emily Brown, a part-time soccer player and copywriter. This news follows the speculation that the Bridgerton star had taken his on screen romance with costar Phoebe Dynevor off screen.

Don’t be too down though—this isn’t the last you’ll be seeing of the well-dressed actor. Page is set to return as Simon Basset for season 2 of Bridgerton, which will begin filming in the coming months.