A MUM has revealed her 15-month-old son boasts a designer wardrobe full of Gucci and Versace – while she’s forced to shop at Primark.

Mum Laurie reckons Denver’s wardrobe is worth around £10,000, and she splashes out a huge chunk of her wages each month on fancy clobber for him. 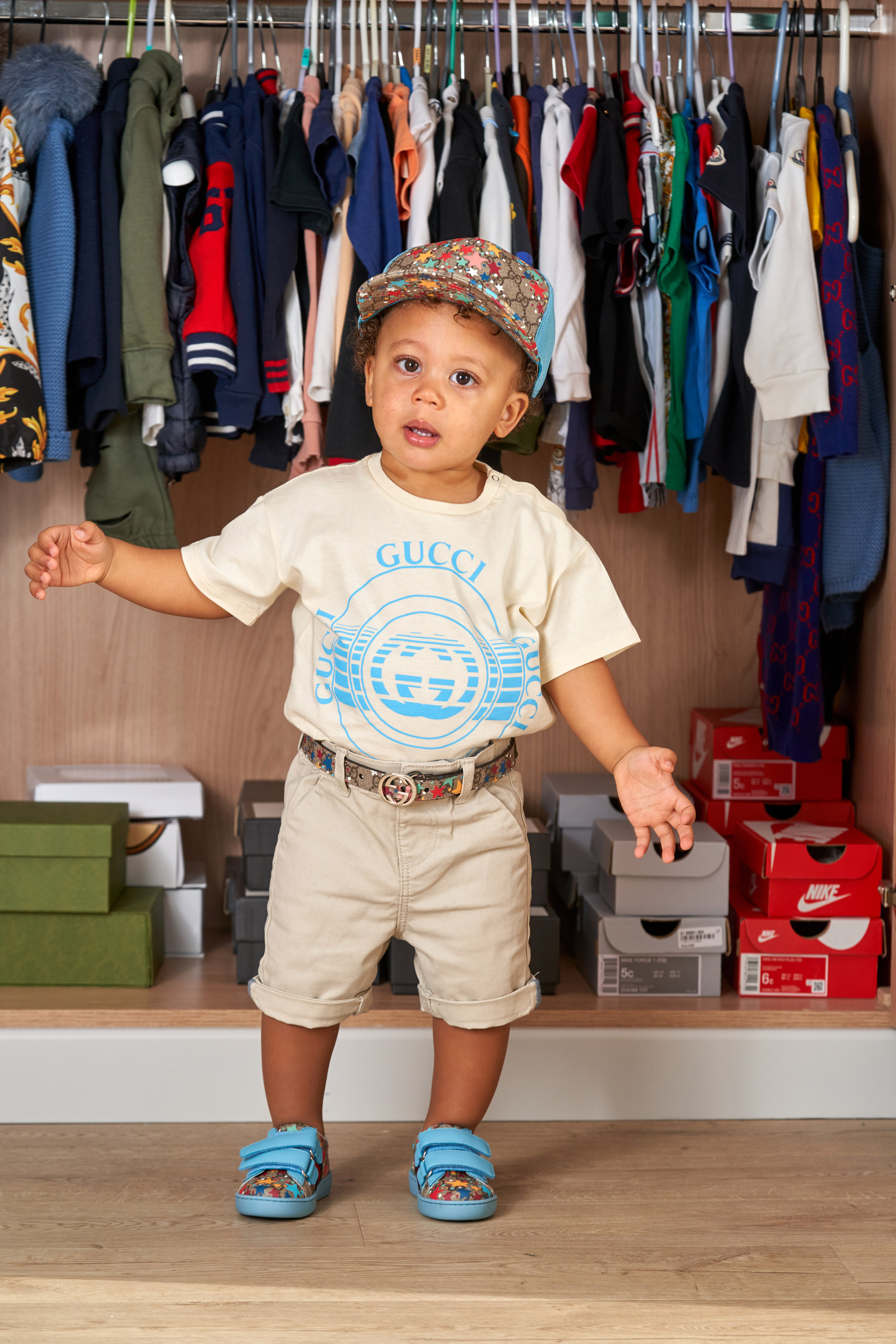 Mum Laurie estimates her 15-month-old son has a wardrobe worth around £10,000Credit: Caters

But while Laurie, a carer, ensures her tot is dressed head-to-toe in the latest clothes, she admits she’s forced to shop at Primark in order to be able to afford high-end fashion.

“I tend to shop at Primark and other high street stores.

“I sacrifice my own needs to ensure he has the best. 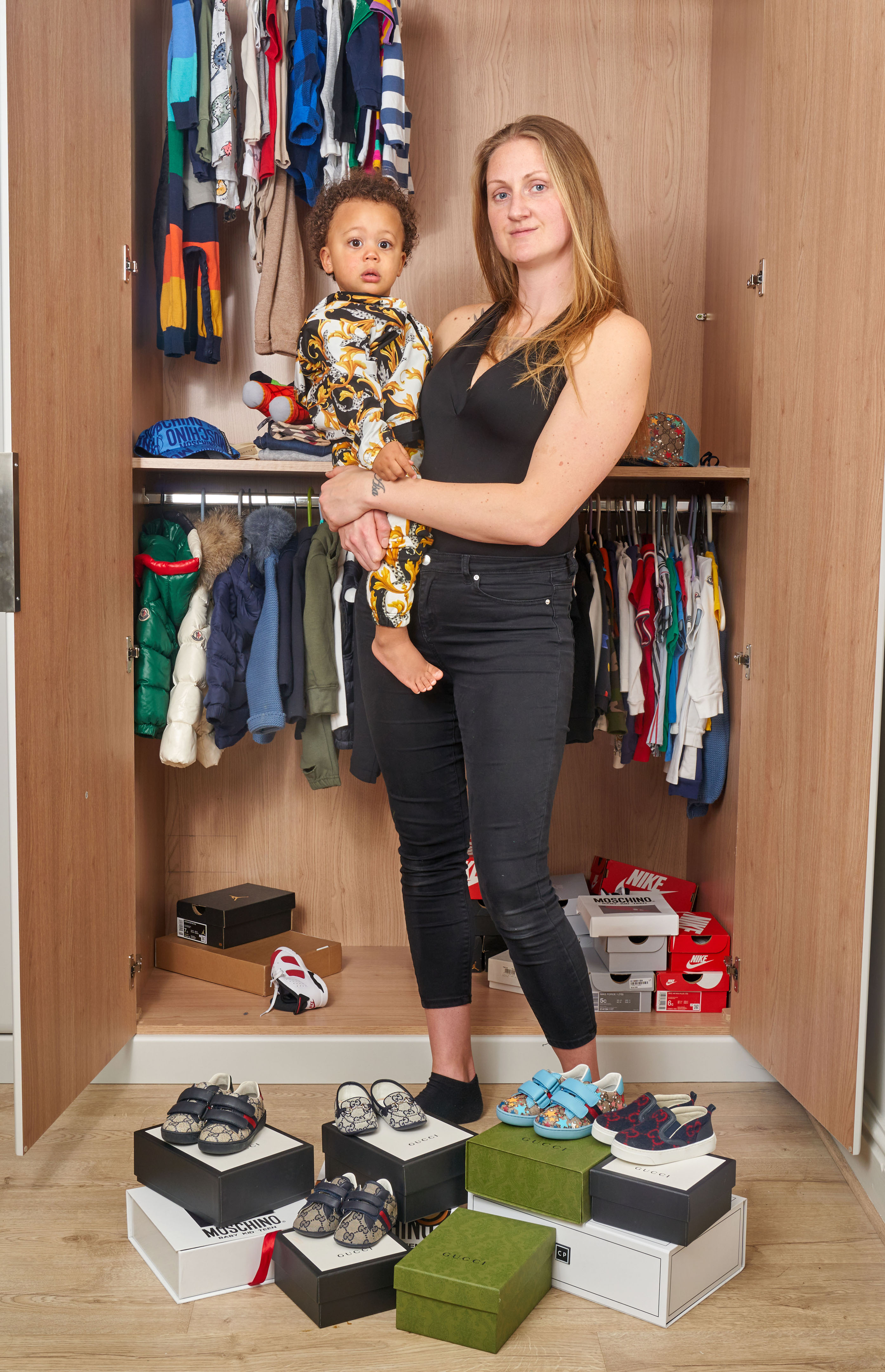 The tot is dressed head to toe in Gucci, Versace and MonclerCredit: Caters

“My wardrobe is small compared to Denver’s who isn’t even two yet.

“He has an absolutely huge wardrobe, whereas my cheap clothes are just stored in plastic boxes.

“Everything of his is neatly organised and worth about ten grand altogether.

“Sometimes he only gets one wear out of the items as he outgrows them. 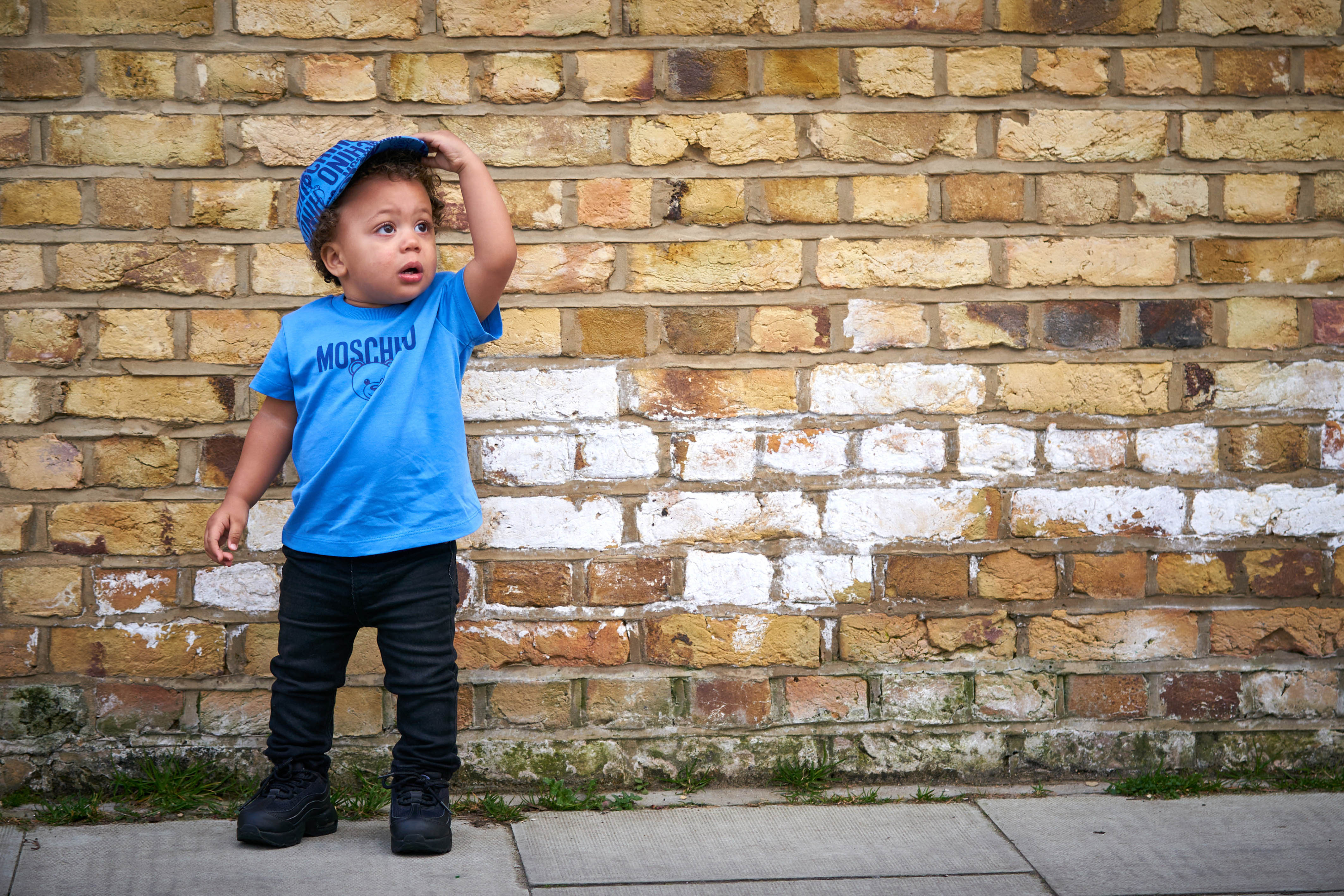 Laurie says she’d rather spend money on her kids than herselfCredit: Caters 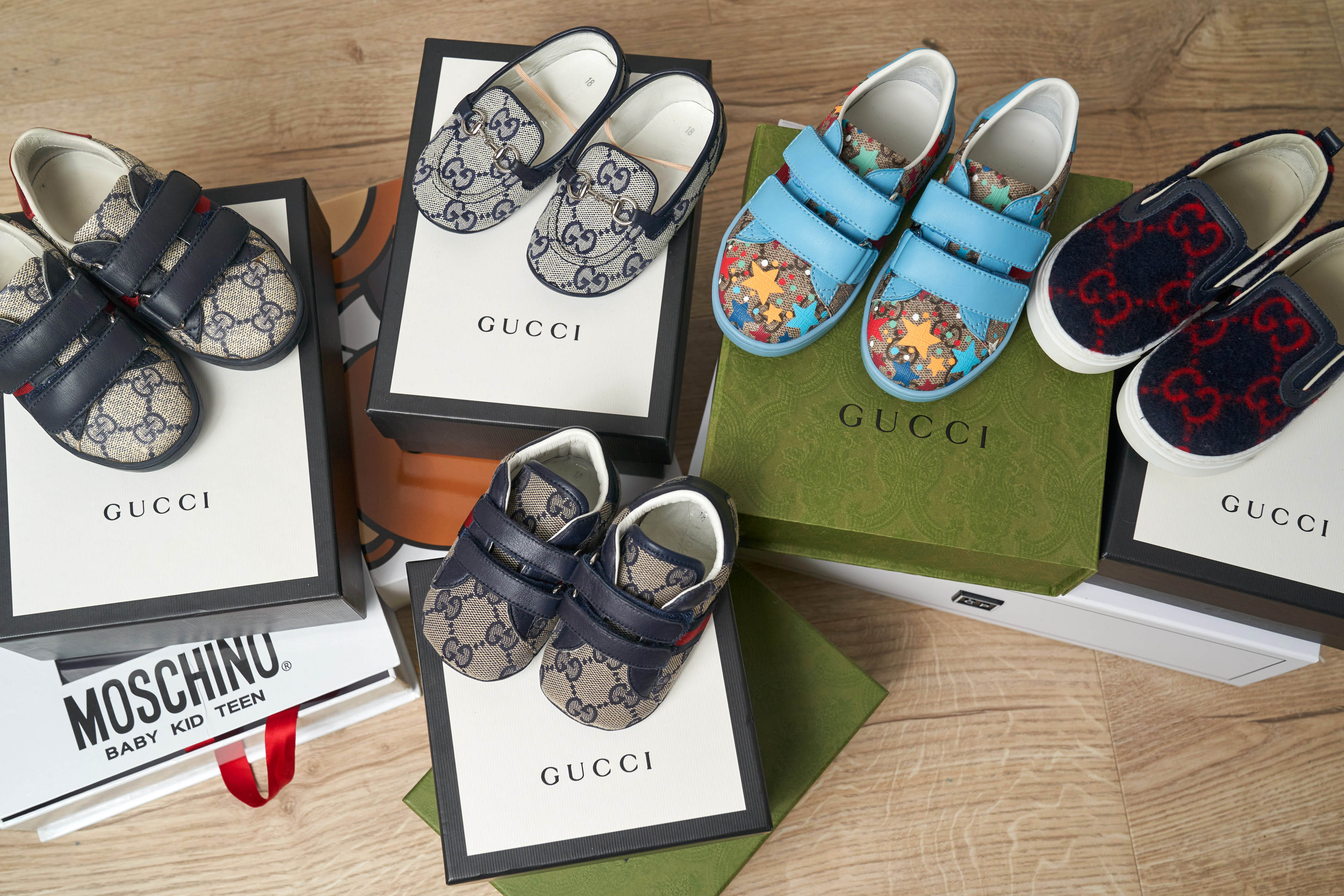 While Denver is dressed in labels Laurie shops at Primark insteadCredit: Caters

But she admits Denver would probably be as happy in a Moncler coat as a Thomas the Tank engine shirt, she claims she wants him to be the best-dressed toddler around.

Highlighting the key pieces in his wardrobe, she said: “He has Gucci tracksuits which are £350, Moschino t-shirts from £60 to £150.

“I like him to look good and it makes me feel happy. He hasn’t got a clue about the cost or brands. 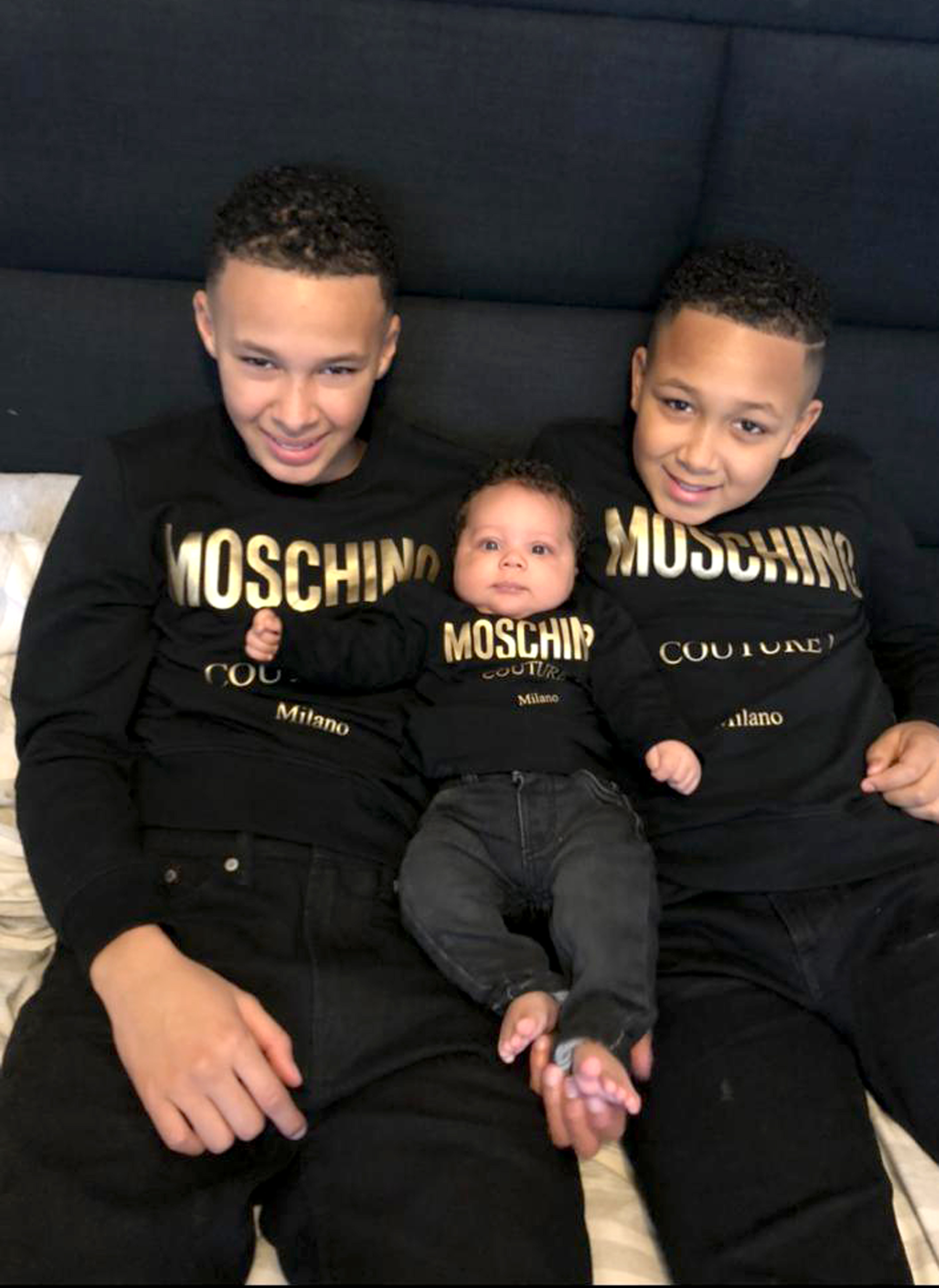 “He’d probably prefer to wear a t-shirt with a cartoon on, but I like him to look smart and stylish for special occasions.

“I take pride in my son’s appearance – I’d rather my kids look good than myself.”

The mum-of-three says she spends all her money on her kids, rather than herself, but says she does try and shop in the sales if she can.

Laurie continued: “I used to wear designer clothes but now I satisfy my spending needs by shopping for Denver. 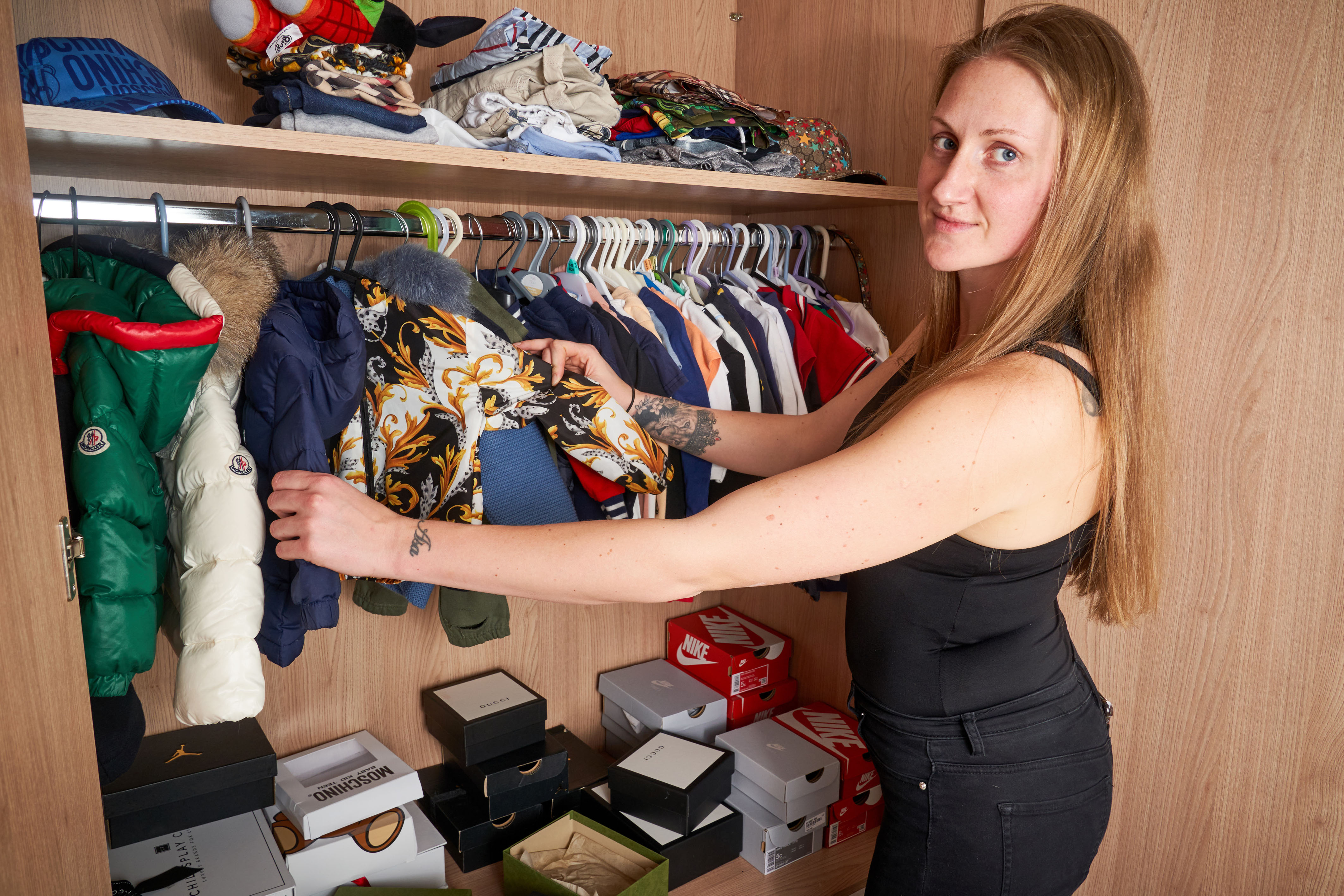 Laurie admits Denver has no idea about the brands and would be happy in anythingCredit: Caters

“There are parents that drink or buy lip fillers to spruce themselves up, but I don’t do any of that.

“All of my money goes on my children – my eldest two Elijah, 14 and Asa, ten, prefer sportswear.

“I barely buy myself anything. I am happy to wear the same pair of jeans from Primark for a while.

“I tend to buy him, something designer, every payday but sometimes I can’t resist if there’s a sale on. 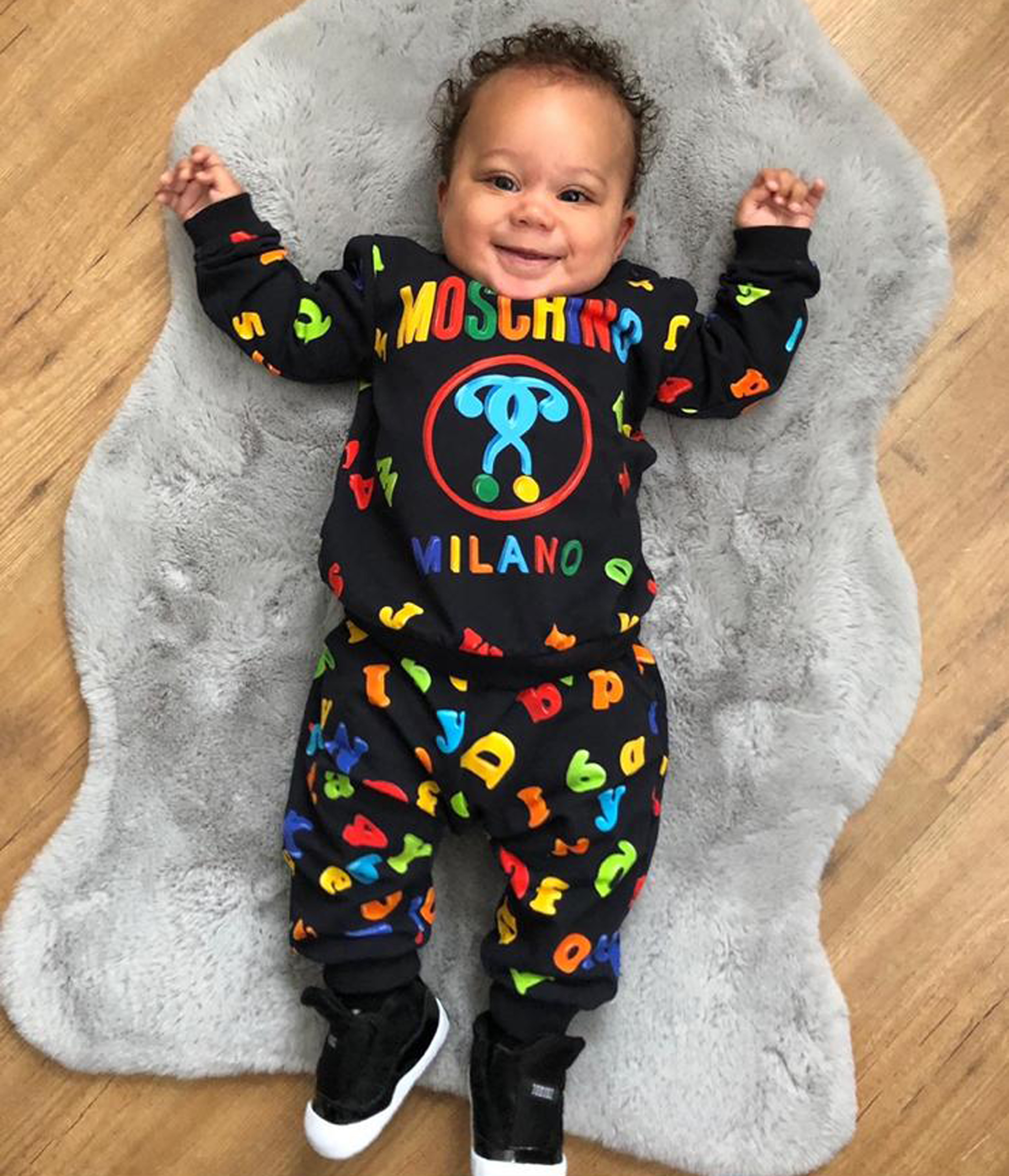 Laurie says she simply sells on clobber Denver has grown out ofCredit: Caters

And while most parents will know how dirty kids’ clothes get, Laurie says she doesn’t bat an eyelid when Denver spills something on a £200 T-shirt.

“I don’t mind him playing whilst wearing expensive clothing as I’m not going to stop him from having fun,” she said.

“He’s a typical boy who loves to get mucky when playing and that’s fine. 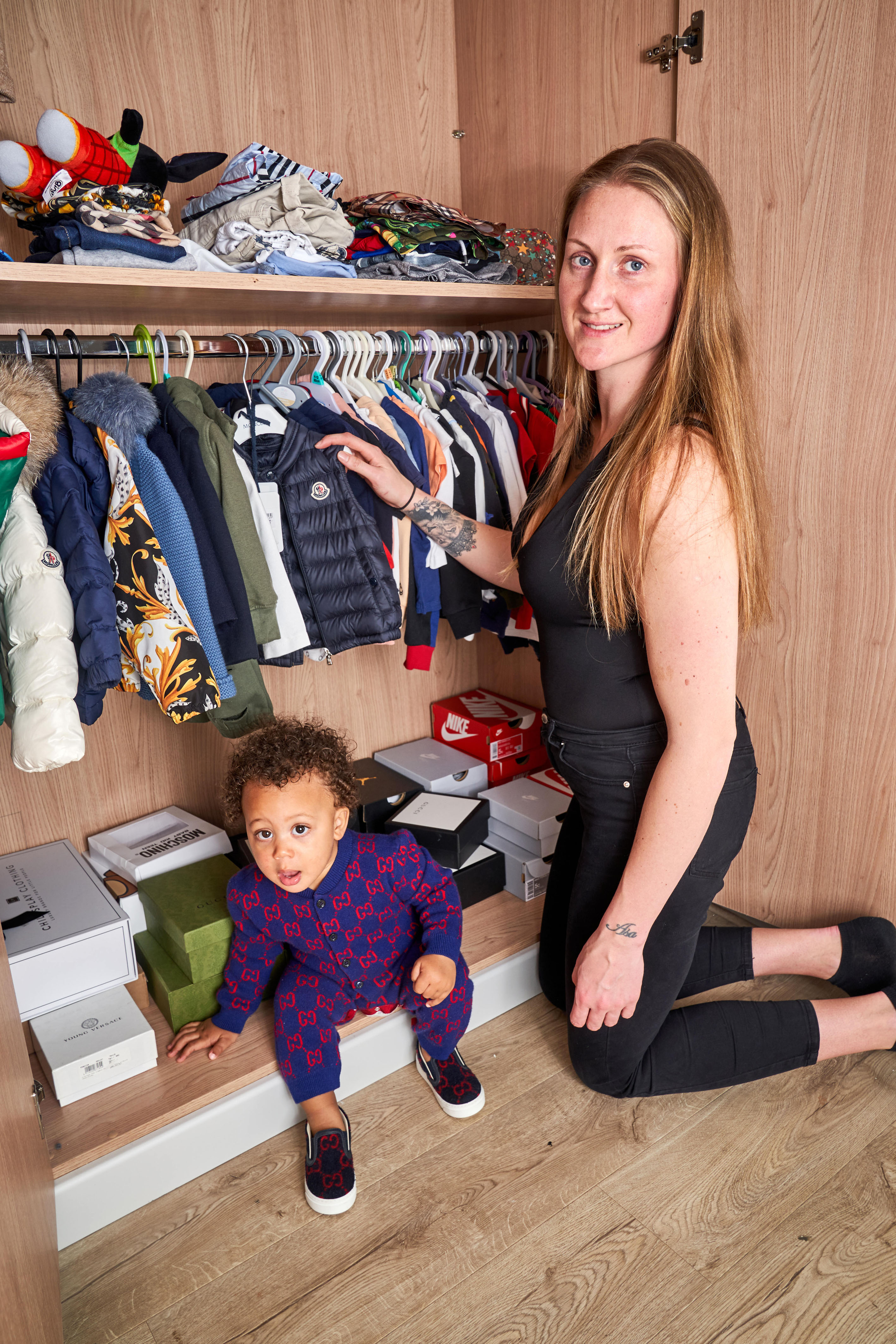 She spends a massive chunk of her wages as a carer each month on new clothesCredit: Caters

“However, I won’t be taking him to the park in his cream Moncler coat which was £380.

“He has previously spilt ice cream all over a Burberry outfit, but I didn’t mind – I have a washing machine.”

When Denver grows out of his trendy threads, Laurie simply sells them online – and manages to claw back some of the money she’s shelled out. 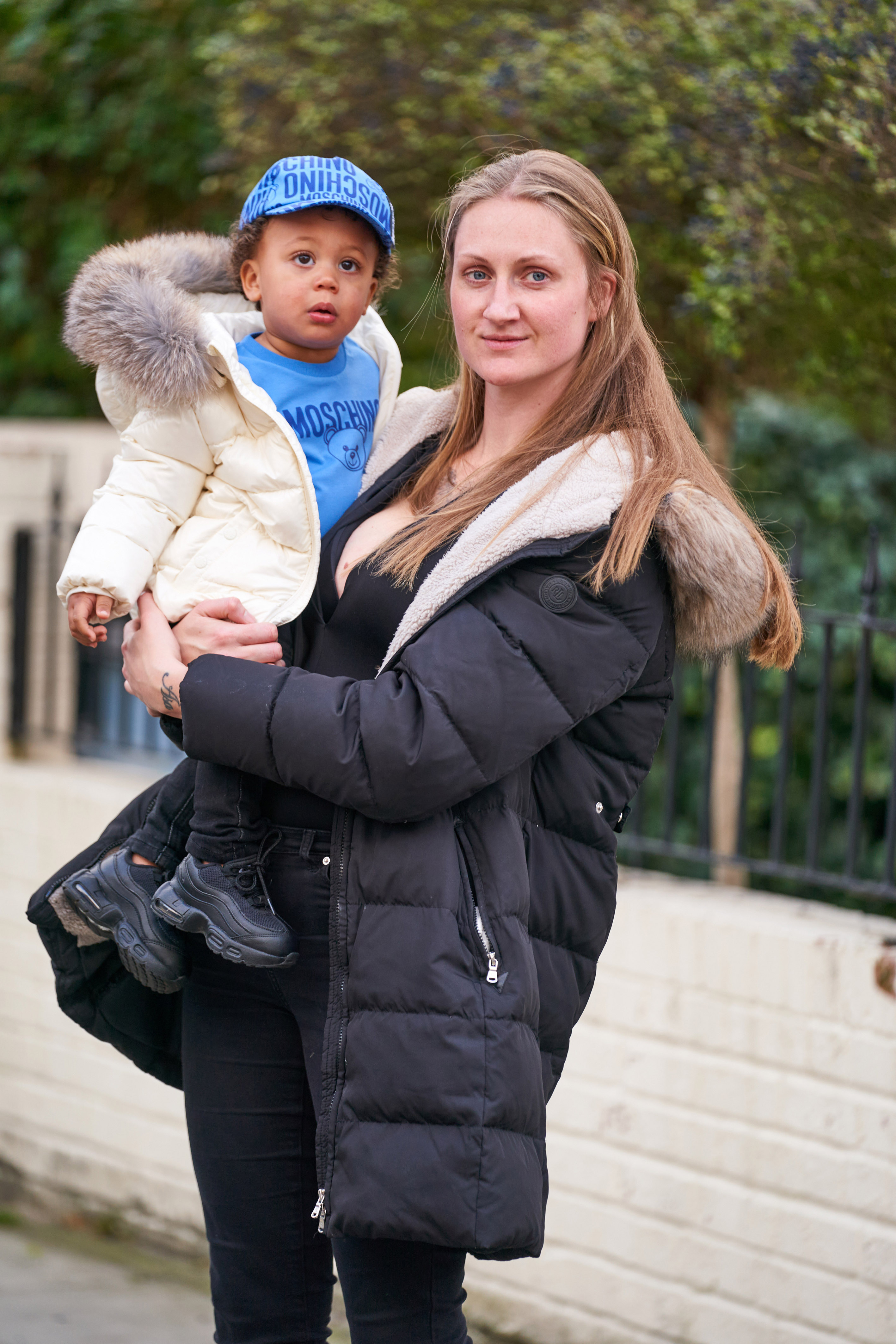 Laurie recalled one time Denver got ice cream all over an expensive shirtCredit: Caters

She said: “He may only wear some items once or twice, so the condition is perfect.

“I can then sell it online and get most of the money back.

“Some people may judge me for Denver’s wardrobe, but it is none of their business. 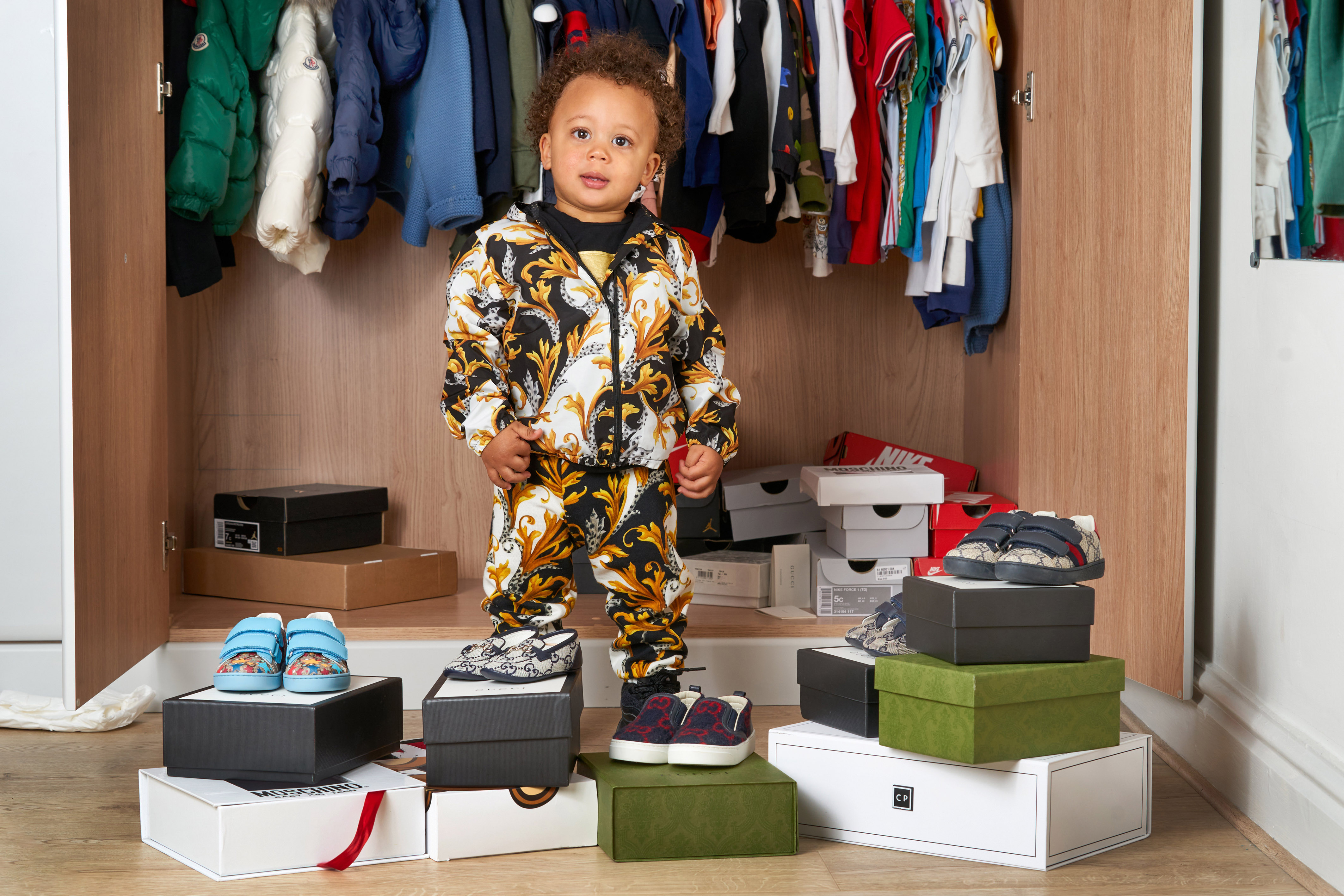 The mum said some people criticise her for spending so much on Denver’s wardrobeCredit: Caters

While this woman revealed how to copy high-end looks from Dior to Prada on a budget.

Plus this fashion fans jokes Zara jeans will ‘keep you fresh all day’ thanks to some VERY unfortunately placed rips in the crotch.

And this woman orders a pair of jeans online and is stunned to find they’re 10 foot long.

Woman reveals how to copy high-end looks on a budget

Third Covid wave will engulf UK in JULY as we unlock and coronavirus infects the unvaccinated, expert warns

What is Discord and is Microsoft taking the app over?