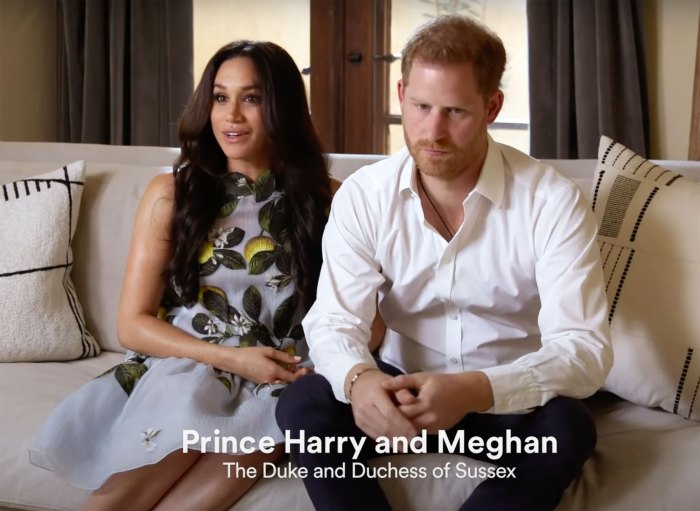 Lemon Pledge! On February 22, Meghan Markle and Prince Harry made their first public appearance since announcing they’re expecting their second child. And, if this livestream hosted by Spotify is an indication of what’s to come, it’s clear that the Duchess is setting some pretty high standards for her maternity style.

For Spotify’s Stream On virtual event, Markle, 39, sat with with Prince Harry in the living room of their Montecito, California home. Markle dressed her growing bump in a chic and airy Oscar de la Renta dress, which retails for $3,490. The A-line design is a lightweight and sleeveless, silk frock with a round neck and flounce hem. The light blue, ‘60s-inspired dress is embellished with lemon motifs from top to bottom. The Duchess of Sussex paired the dress with long, beachy waves and a dramatic eye.

While Markle look polished as per usual, Prince Harry took a more relaxed approach for the during the appearance. He wore a white, collared shirt, with two buttons undone and a pair of black pants.

The Sussexes said a few words in order promote their newest venture, Archwell Audio, a production company that will produce a series of podcasts exclusively for Spotify. “We’re using podcasting to drive powerful conversations,” Markle said. “We created Archwell Audio make sure we can elevate voices that maybe aren’t being hear and hear people’s stories.”

Prince Harry adds, “The biggest part of this is to create this community of where you can share and encourage everybody else to then share their own vulnerabilities within that safe space.”

The couple already released their first episode, which features a handful of celebrities and change makers like Tyler Perry, Elton John, and Stacey Abrams. In December 2020, the duo also released a teaser for their series, in which they gave a glimpse into their California life. Archie, 1, even made a guest appearance to wish listeners a happy new year. Too cute! 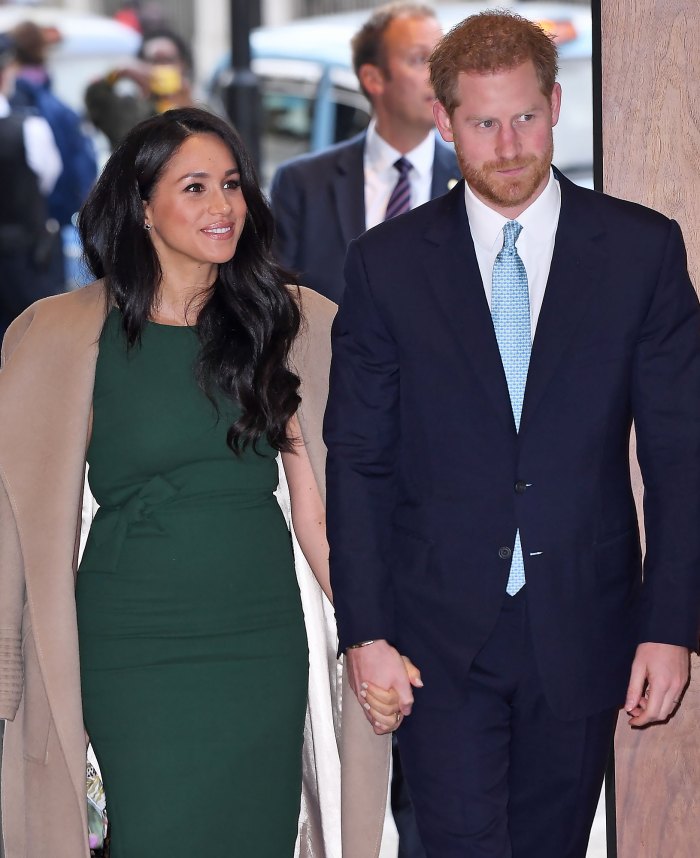 The occasion definitely has our fashion-centric minds buzzing about what Markle will wear next. The royal stunned in a white Carolina Herrera dress, that was made for her while pregnant with Archie, to announce her pregnancy on February 14, 2021.

We can expect to see the couple once again on March 7, 2021 for a 90 minute special on CBS. The Sussexes will sit down with Oprah for an intimate conversation about marriage, motherhood, philanthropic work and the royal family.