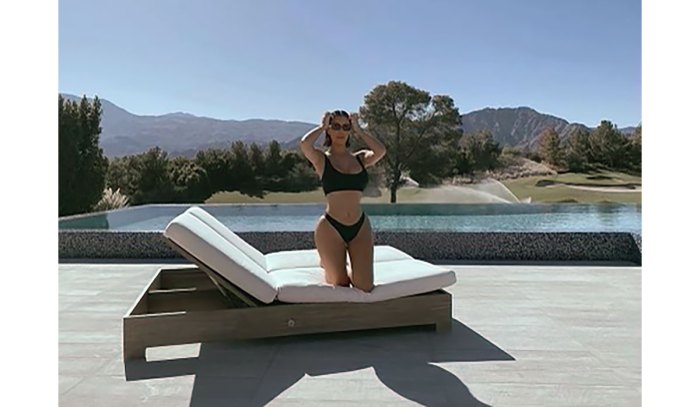 Hot mama! Kim Kardashian shared a throwback pic of herself in a chic black bikini amid the Kanye West divorce rumors.

On Tuesday, January 19, the 40-year-old took to Instagram to show off her infamous curves in a simply stunning black bikini. “This is more than life…this is paradise ☀️?✨,” she wrote in the accompanying caption. With her hair in a short, blunt bob, we know this pic can’t be a recent snap. After all, on January 13, she debuted extra-long, highlighted strands for a totally fresh 2021 look.

So what is the Keeping Up With the Kardashians star hinting at with her caption and picture choice? Perhaps she’s reminiscing over easier times before the COVID-19 pandemic and marital woes. Or maybe she’s acknowledging and paying tribute to her fortunate life even during these difficult times.

Us Weekly exclusively revealed in July 2020 that Kardashian, who shares children North, 7, Saint, 5, Chicago, 3, and Psalm, 20 months, with West, began meeting with divorce attorneys. When the rapper cried and claimed that the couple considered aborting their first child, North, it was the “final confirmation” for the Skims founder. “She will always protect the children first,” a source told Us.

After the couple had a massive fight in December, Us reported that the reality star was done dealing with the Yeezy designer’s “unpredictable behavior.”

“She has tried to get him into treatment for his mental health and all attempts have been unsuccessful,” an insider told Us at the time. “No one can tell Kanye what to do other than Kanye.”

Then this month, multiple publications reported that Kardashian has been in contact with high-power divorce attorney Laura Wasser. However, she has yet to officially file for divorce.

“While they have a multitude of problems, friends on both sides think there is a chance this separation could give them a fresh start,” a source told Us Weekly exclusively.

The KKW Beauty founder is indulging in some time off to enjoy herself and get away from it all, taking in a road trip along the California coast. On Sunday, January 17, she took to her Instagram Story to share a quick clip of her travels. With the landscapes whizzing by and the children’s voices heard in the background, it seems like the perfect way to unwind during all the trials and tribulations.

Who is Lindsey Coulson and will she be returning to The Bay as Penny Armstrong in season 2? – The Sun