During his performance of “Sad People,” the 37-year-old rapper rocked a floral sundress that resembled the pattern of a dress that Cobain famously wore on the cover of a magazine in 1993. When he took the stage to sing “Tequila Shots,” Cudi donned a green cardigan, similar to the sweater the late rocker wore during Nirvana’s MTV Unplugged concert.

“Kid Cudi pulling the ultimate Kurt Cobain tribute on #SNL on the week of this death. @KidCudi all about love and suicide prevention and awareness!!!” one social media user tweeted alongside photos of both looks. 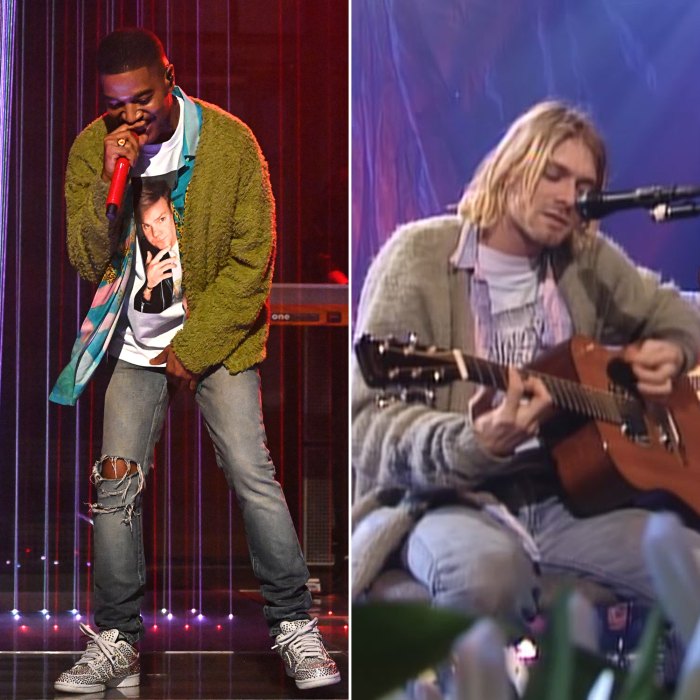 “Kurt Cobain was a precious soul. During a time that it was popular to shame things that went against society’s idea of normal, Kurt embraced them and advocated for them,” another viewer wrote. “Kid Cudi paid homage by doing the same thing. I truly LOVE to see it.”

A third person tweeted, “If you’re out here hating on Kid Cudi because he was wearing a dress, grow up and understand that it’s not only an homage to Kurt Cobain but also him speaking loudly for everyone to be and love themselves for who they are.”

Cobain died by suicide on April 5, 1994. Cudi also paid homage to Farley, who died of a drug overdose in 1997. The musician wore the former SNL star’s face on a T-shirt under his green cardigan on Saturday.

“Kid Cudi’s clothing in both of his SNL performances tonight seemed to pay tribute to two people who struggled their whole lives with depression and who ultimately succumbed to suicide and drug abuse: Chris Farley and Kurt Cobain. Listen to Cudi’s lyrics,” a viewer tweeted.

Cudi has been open about his own mental health struggles over the years, seeking treatment in 2016.

“I am not at peace. I haven’t been since you’ve known me,” he wrote via Facebook at the time. “I simply am a damaged human swimming in a pool of emotions everyday of my life.”

More recently, the “Pursuit of Happiness” singer responded to a fan who revealed he was cited in a psychology textbook.

“I was reading my psychology textbook and i see your picture @KidCudi you have impacted and brought great awareness to Depressive and Bipolar Disorders and how treatment actually works,” the fan wrote in March 2020. “You have gave many people hope and made many feel like they’re not alone ❤️ grateful for u man.”

Cudi replied, “Wow this is awesome!! Grateful for u too! Thanx for ridin w me all these years!”