A TIKTOKER did a massive Shein fall haul – they fund a Skims dupe in every color but also said one of the tops they bought looks like something her grandmother would wear.

Kenzie Crow has more than 7,000 followers on TikTok and creates content on fashion and shopping hauls. 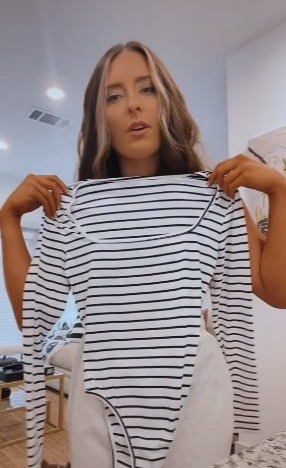 She said she needed to get a new wardrobe for the fallCredit: TikTok/@kenzie.alisexo

In a recent video, she revealed that she had a huge shopping spree at Shein and shared all of the items that she bought.

The haul was centered around neutral pieces for the fall, which Kenzie said that she didn’t have so she had to buy an entirely new wardrobe.

Kenzie’s haul consisted of puffer jackets, shoes, and a sweater vest but also had some bodysuits that looked similar to products from Kim Kardashian’s shape-wear line, Skims.

“I actually bought every color in this because apparently it’s a Skims dupe and it’s super soft,” Kenzie said, holding the bodysuit up.

“I just will not spend that much on a bodysuit from Skims and these are so, so cheap and they feel really good.”

She also bought a beige pea coat but said that she didn’t know how to feel about it.

“I think when it’s unbuttoned, it’ll be cute with the right outfit,” she said.

“But right now, just buttoned, it looks like something my grandma would wear.”

She then gave a disapproving look to the camera.

The video received several comments with many viewers asking Kenzie to share links to the outfits and others asking questions.

“Is it good quality clothes?” one viewer asked.

“All that I got was good quality!” answered Kenzie.

“I have so many of those body suits!” said another person. “Just like Skims but for an affordable price.” 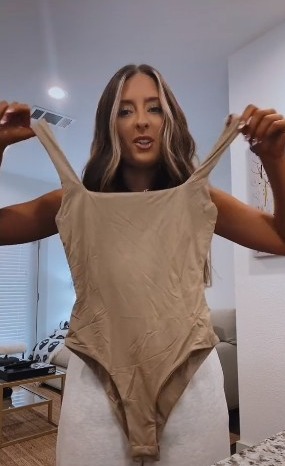 She says that she found dupes for Kim Kardashian’s SkimsCredit: TikTok/@kenzie.alisexo

I’m plus-size – I was too scared to wear bikinis for years but now I confidently show off my tummy, I know it looks good

I hate wearing bras and refuse to, even for work – I’m a baddie and I don’t care

I’m a 34DDD and tried Amazon’s Skims shapewear dupe – it left me speechless, I looked so good

Why I ‘Rarely Wore Color’ With the Royals