A HORRIFIED shopper claims that her new jeans from PrettyLittleThing were covered in “period blood” when they arrived, forcing her to shower four times.

Jade Brown, from Nottingham, Nottinghamshire, tried on the £30 size 10 ‘mom jeans’ when they arrived earlier this month only to discover a red stain on the crotch as she glanced in the mirror. 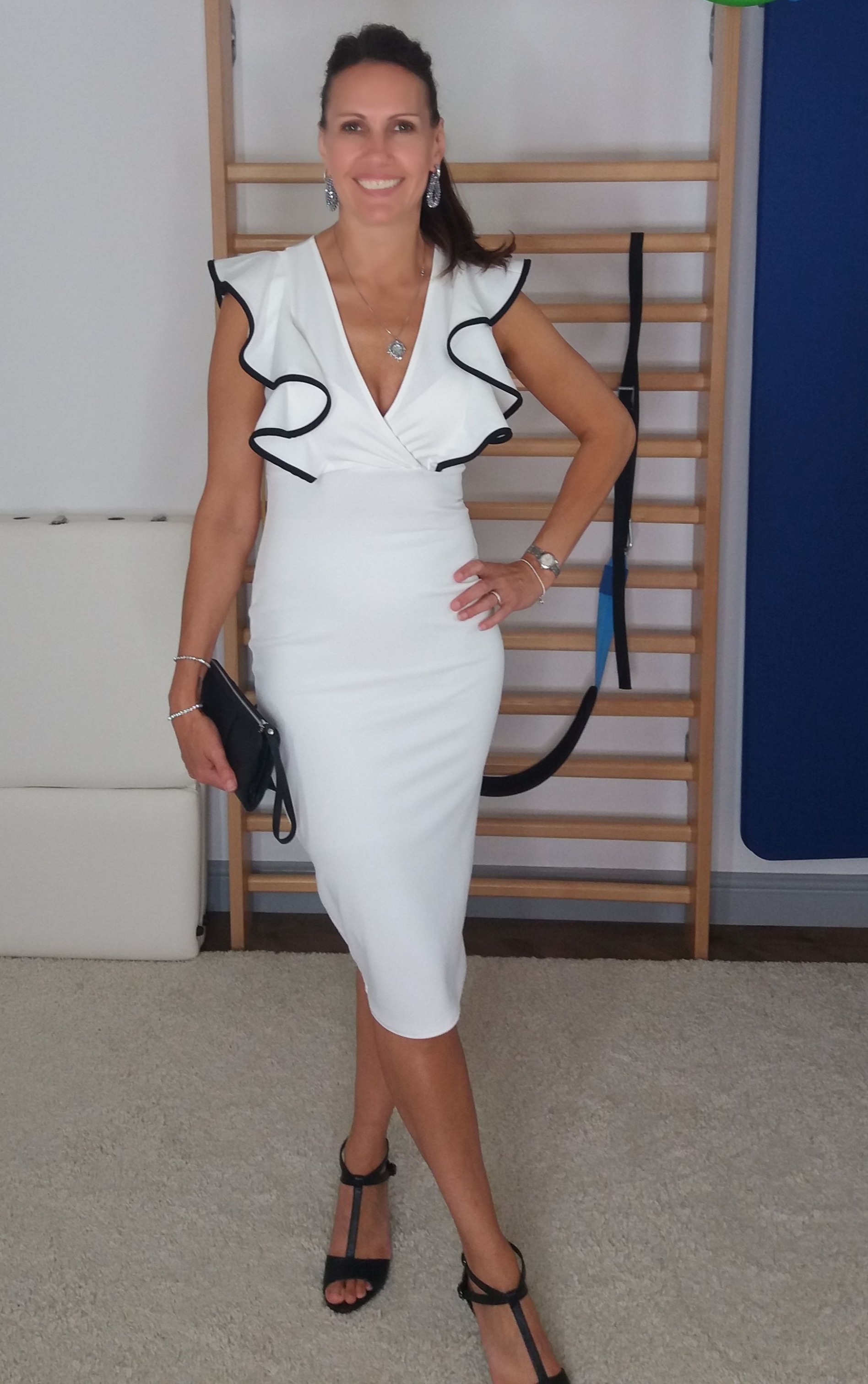 Jade Brown, from Nottingham, Nottinghamshire, was disgusted after received the worn and bloodied jeans from fashion giant PrettyLittleThingCredit: Kennedy News

The mum-of-one shimmied out of the jeans straight away and was “absolutely mortified” when she made the grim discovery of what she believes is “dried-in blood”.

Absolutely “disgusted”, Jade blasted the online retail giant for sending her a “biohazard” in the post that had “bacteria festering” in the crotch.

After making the grim discovery Jade contacted PrettyLittleThing and claims she was repeatedly told to be “patient” by staff, before being issued a scant apology and a £10 credit note, followed by a partial refund.

The 48-year-old has since had £127 of her £167 order refunded and has reported the incident to Trading Standards, but has vowed never to shop at PrettyLittleThing again. 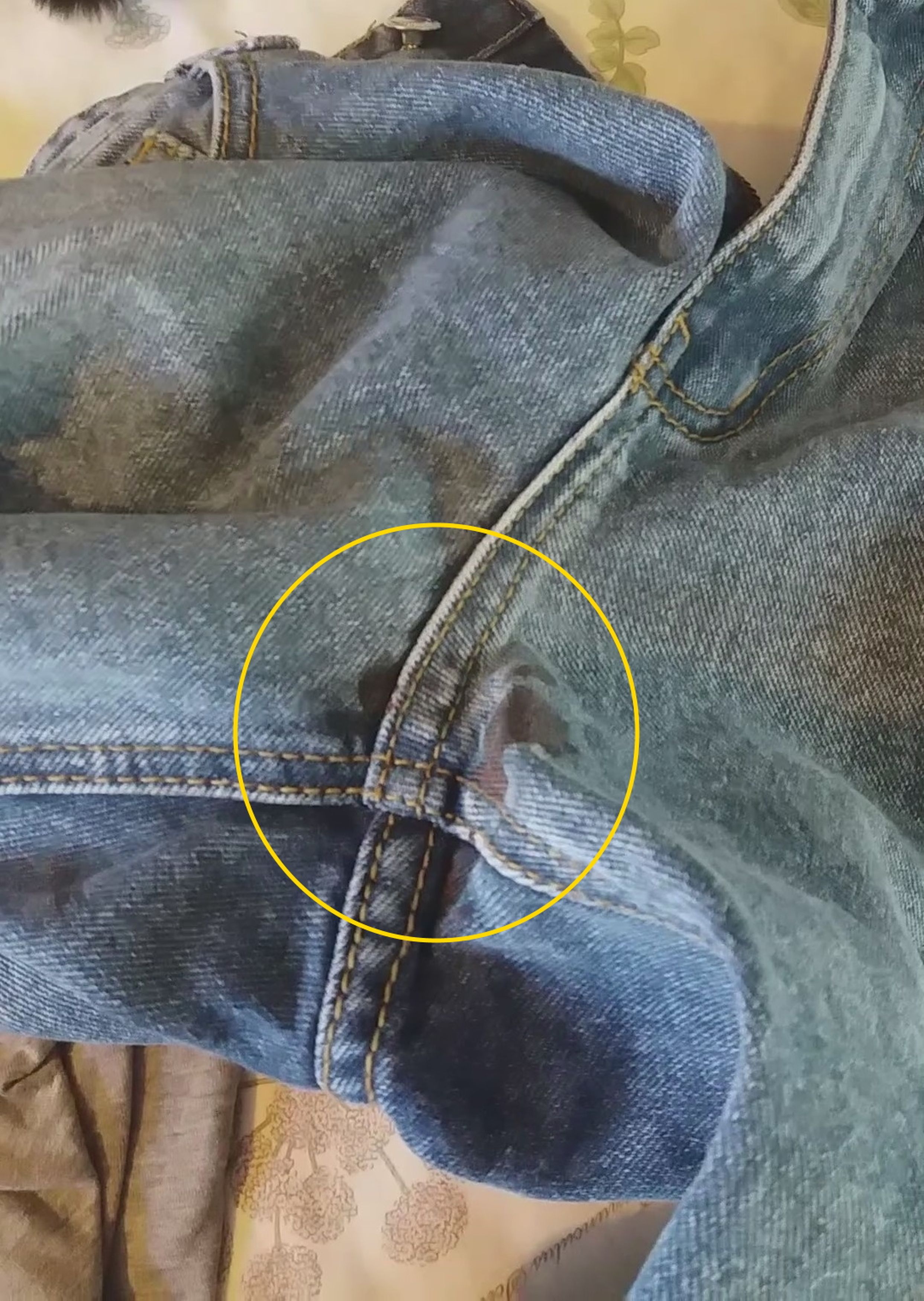 She noticed the stain in the crotch of the jeans after trying them onCredit: Kennedy News 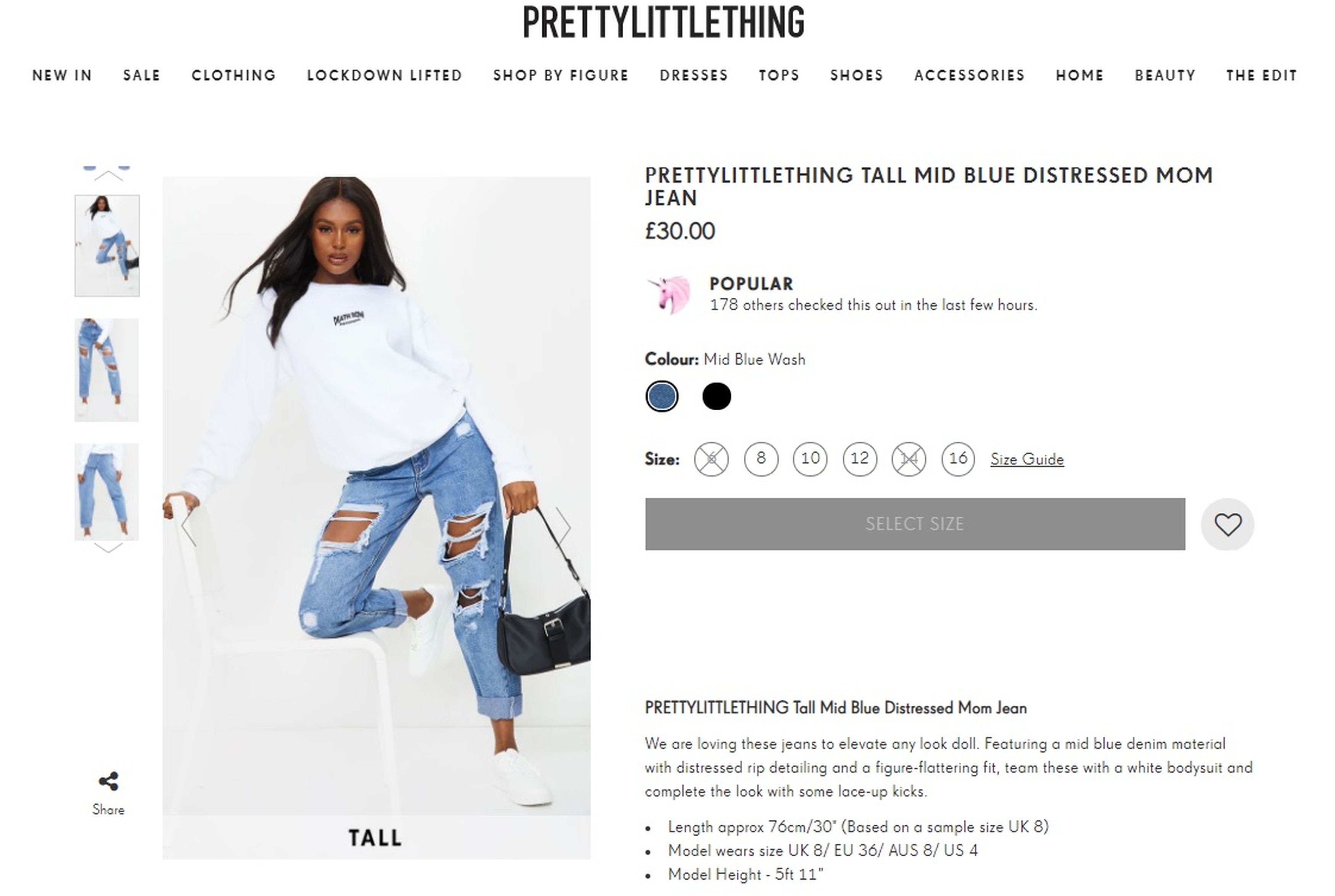 It’s been reported that PrettyLittleThing said they were “appalled” at the condition of the jeans and said they were launching a full investigation to find out how they were “not up to their usual standards”.

Jade explained that first tried on the jeans at home and they “fitted ok” but that’s when she “looked in the mirror” and could see “a stain in the crotch area.”

“I took them off and I saw all dried-in blood,” she said.”They’d obviously been worn by somebody who had an accident and parcelled them up and sent them back.

“I was horrified when I realised what it was, I was absolutely mortified.”

Jade said that she “grabbed everything of my bed” that came in contact with the jeans and “threw it in a hot wash”.

“I got in the shower and scrubbed myself, I was retching, it was horrible,” she said. 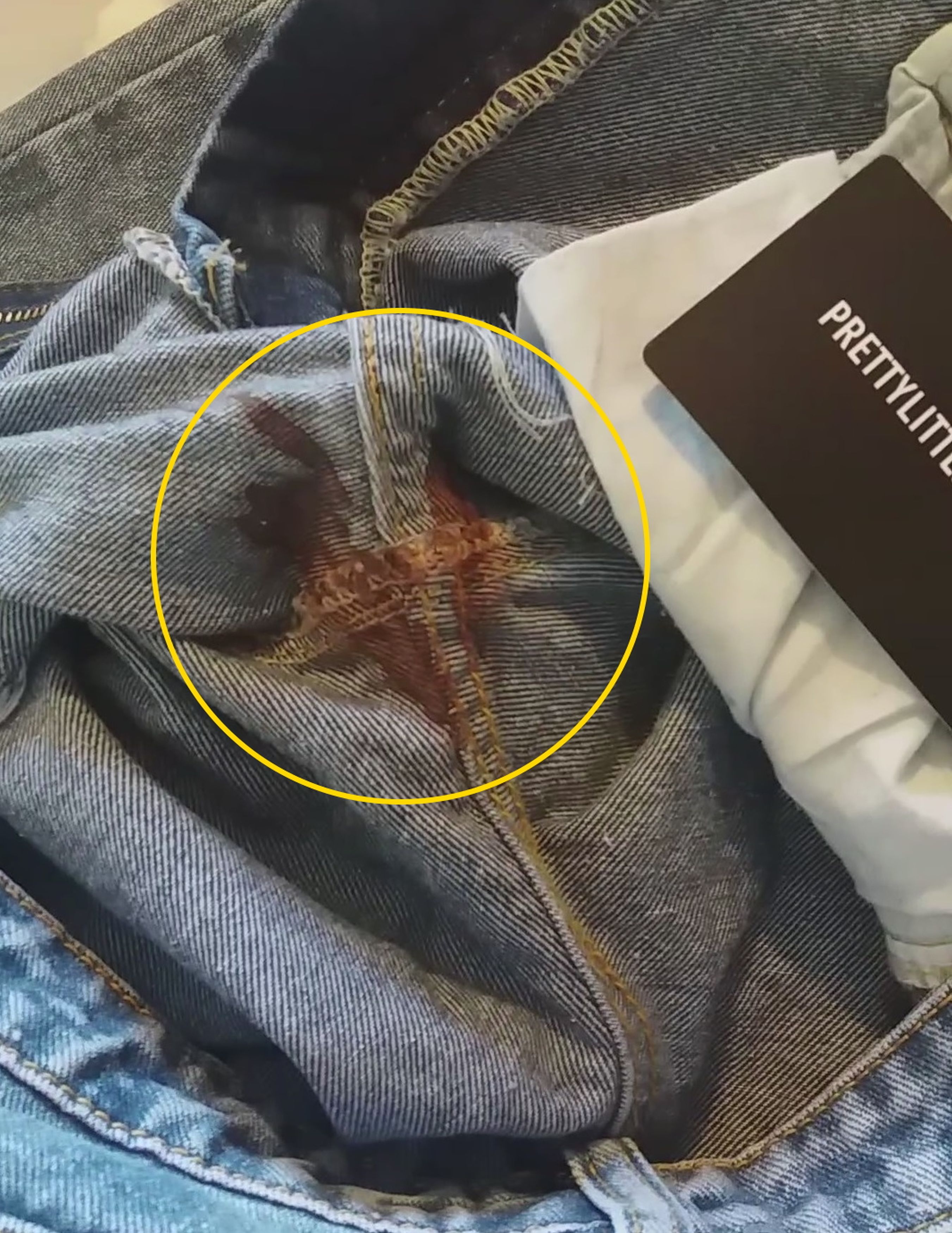 Jade claims the stain is ‘dried period blood which made her gag and shower four timesCredit: Kennedy News

“I took all my bedding, duvet to the laundrette and I said ‘please just wash this’, I couldn’t even tell the woman why.

“I must have showered about four times that day because I was just so paranoid, it was disgusting.”

The pilates and physiotherapy business owner snapped up £167-worth of items including two pairs of jeans and a variety of tops but claims the other pair of jeans arrived with a broken zip while one jumper had a rip in the sleeve.

Jade said: “I contacted the company and they said ‘oh sorry about that we’ll pass it on to the relevant department and here’s £10 credit to spend in our online store’.

“I thought ‘really, you think I want to purchase more stuff from you?’ If you think £10 is going to appease me this is just no.

“For a week and half I was just told ‘be patient’, I was absolutely furious that I kept getting passed from pillar to post. They weren’t bothered. 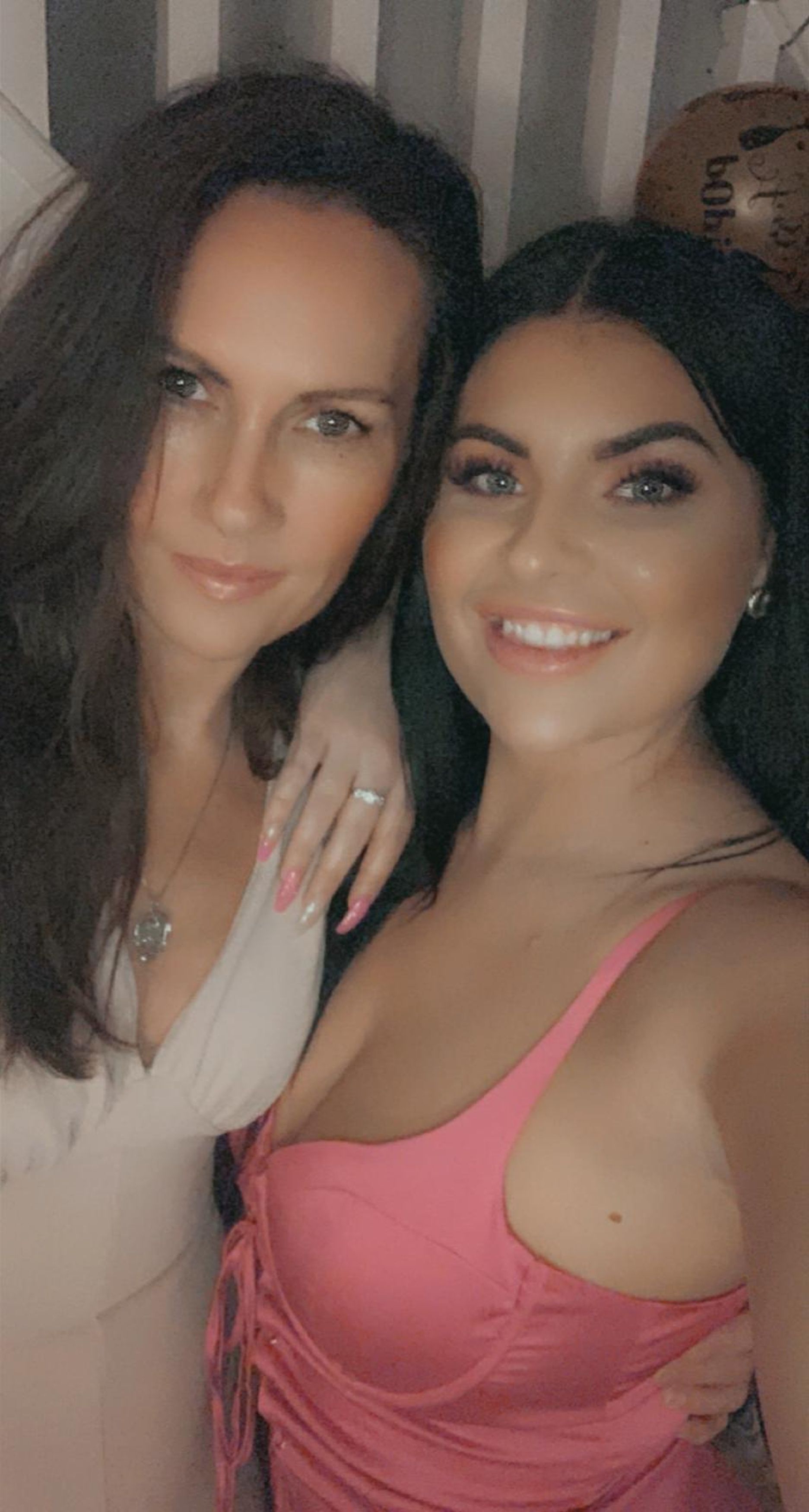 Jade contacted PLT and has since been refunded most of her large orderCredit: Kennedy News

“I was panicking thinking ‘could I be infected with something?’

“It’s a biohazard essentially. There’s obviously going to be some kind of bacteria or horrible thing festering in there [the jeans] of some sort, it still makes me cringe now thinking about it.

“The minute they got that email they should have acted on it immediately.

“I came into physical contact with that and during a pandemic you don’t want to be coming into contact with people’s bodily fluids.

“I will absolutely never again shop with PrettyLittleThing again, no chance.”

A PrettyLittleThing spokesman said: “We are appalled that Jade has received her garments in this way which is not up to our usual standards.

“Our customer service team are in direct communication with Jade to try and resolve the matter as well as launching a full investigation into how this has happened.”

Nottingham City Council Trading Standards have been contacted for comment.

In other fashion fails, this PrettyLittleThing customer claims her thong arrived covered in blood.

Plus this PrettyLittleThing customer was horrified when her boots “arrived covered in dog poo.”

Michael B Jordan finally reacts to those exciting Superman rumours