A permanent mark! Heather Rae Young got a tattoo of her fiancé Tarek El Moussa’s name on her hip six months into their engagement.

The Selling Sunset star, 33, debuted her dainty new ink — which reads, “Yes sir, Mr. El Moussa” — with a close-up photo via Instagram on Monday, February 8, that also showed off the massive diamond engagement ring she recently had upgraded.

The couple started dating in July 2019 and got engaged the following July. The Flip or Flop star, 39, was previously married to Christina Anstead from April 2009 to January 2018; the exes are the parents of daughter Taylor, 10, and son Brayden, 5. (The Christina on the Coast star, 37, also shares son Hudson, 17 months, with estranged husband Ant Anstead.)

“It’s incredible to think how much life can change in a short period of time,” El Moussa wrote via Instagram in January while celebrating his and Young’s 18-month dating anniversary. “I love this girl more and more by the day! I came home with @heatherraeyoung after 4 days of dating, she moved in, and we never looked back. She has exponentially improved the lives of everyone in my family.” 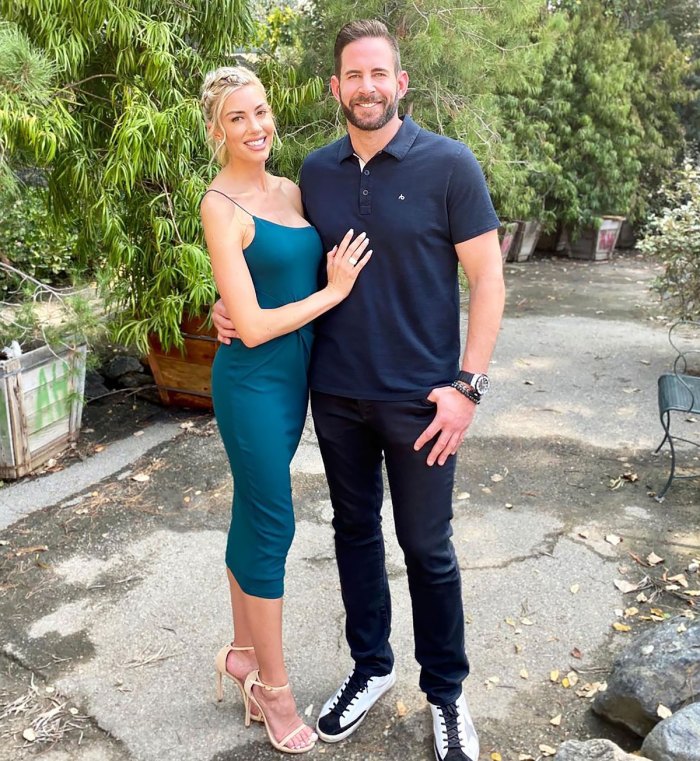 He continued, “Everyone said I was crazy but here we are engaged almost two years later. She’s our rock, our best friend, and my hunny bunny. We love you to the moon and back. Can’t wait to take more photos like this in fun places like New York City! I can’t wait to continue to build this life with you. You make me a better man.”

In the comments section, the Netflix personality wrote that she loves the “memories” she and the Tarek’s Flip Side star have made so far in their “beautiful life together.” She went on to call him “my best friend, my everything, my rock, my motivator.”

While Young and El Moussa’s bond developed quickly, it took some time for his son, Brayden, to get used to having someone new around after the HGTV veteran’s divorce from Christina.

“He was 3 years old [when] she came in one day out of nowhere and, like, just moved in. It took him a few weeks to get accustomed to it,” El Moussa exclusively told Us Weekly in January, noting that his fiancée is “now best friends” with the kindergartener.