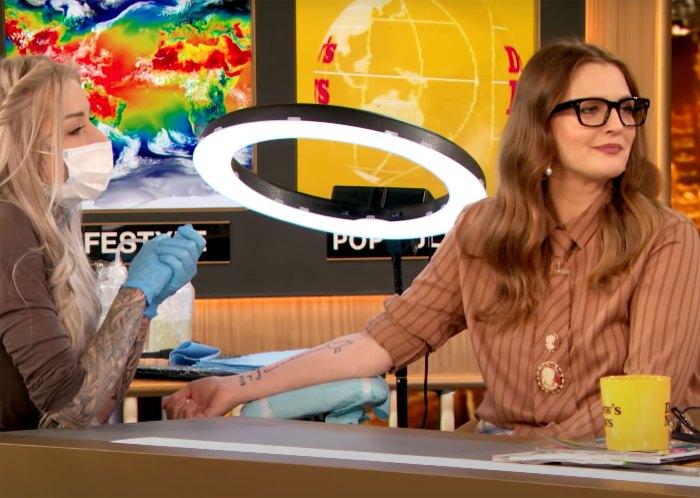 Happy tears! Drew Barrymore got a special new tattoo inked on her arm during the Thursday, May 6, episode of The Drew Barrymore Show — and the sentimental meaning behind the design brought tears to her eyes.

The 46-year-old talk show host teamed up with Ink Master champion Ryan Ashley for her on-air (!!!) tattoo session, where she had “home is where we are” inked on her forearm.

While Barrymore somehow held her composure during the actual tattoo process, she started crying when explaining the meaning behind her latest design.

“I’ve been saying it to myself for the last five years. Wherever life takes you, if you’re lucky enough to be alongside people you love, then to me, that became the definition of home. So thank you for putting this most important life lesson on my arm, permanently.” the Flower Beauty founder expressed during the segment. 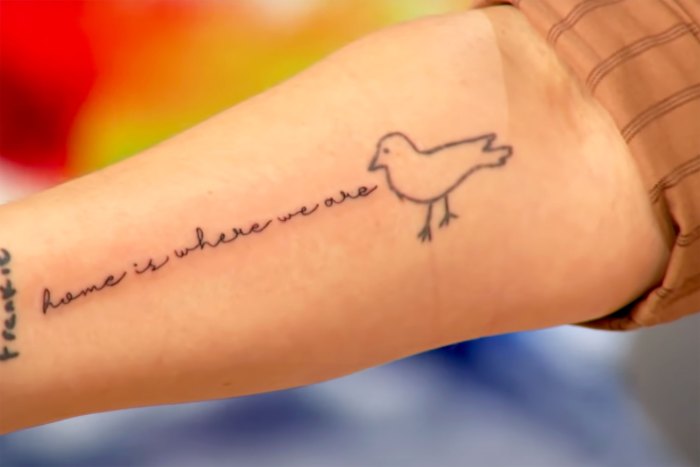 “To my daughters, if you ever get to see this episode, you are my home and I love you more than anything. You are the reason I understand my whole life — because of you. So thank you, you are my home,” she said, wiping away tears.

Shortly after the episode aired, Barrymore took to Instagram to share additional footage taken just after getting her new ink.

With her arm held out, showing off the design, she said: “My eyes are stinging because I’m crying so much. I want people to feel that no matter where they go in the world, if they’re lucky enough to have someone to love … that is so fulfilling.”

This was a revelation the 50 First Dates actress came to after her life’s plan took a bit of a detour. “I never knew what home was until I had my daughters. I thought, ‘I’m gonna make us a home that will be forever and so strong — and then life changed and our plans changed.”

She added: “When I was in rental apartments, or not knowing where life was going, or so upset that the plans I tried to solidify for my kids had changed, it really led to the discovery of what really means for me — and that is if we are together, wherever we are, home is where we are.”

Barrymore’s post was quickly met with support from fans, many sharing her sentiment. One wrote, “Yep!! Home is between souls! Not a place! It is all together.” Another added: “So true! Minis have a way to make you go deeper than you ever thought possible.”