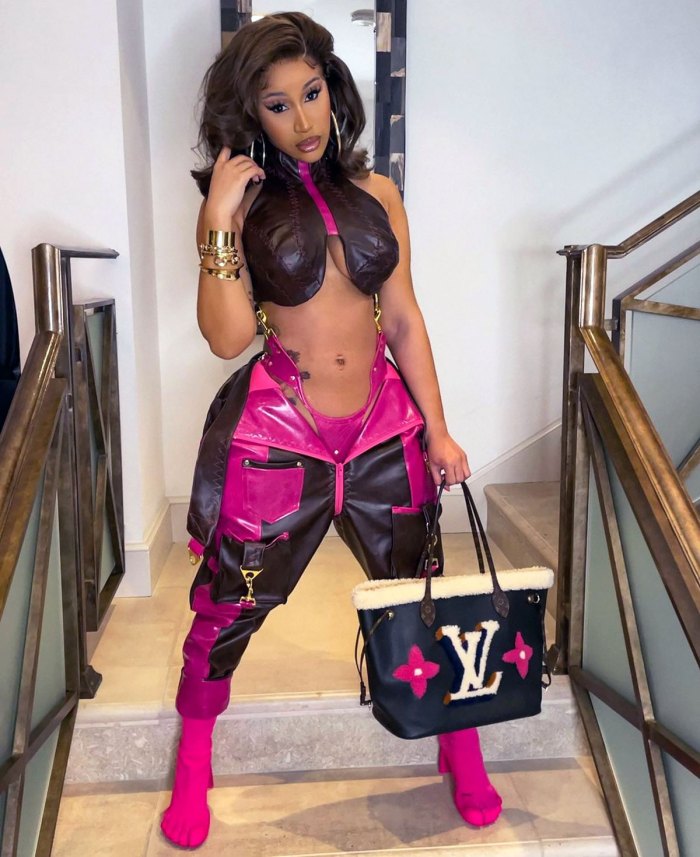 Hottie alert! Cardi B shared a picture of herself rocking the wildest brown-and-pink leather outfit, paired with bold designer accessories because… obviously.

On Thursday, January 7, the 28-year-old hitmaker took to Instagram to share a snap of her latest sexy ensemble. The Grammy Award-winning artist wore a harness look complete with a pink leather thong that hooked into her revealing halter-style top. Her cargo pants also featured gold buckles and snaps for an edgy, cool finish.

When it came to her accessories, the “WAP” performer went for bold designer must-haves. She wore the infamous sock silhouette booties, a.k.a. the Balenciaga Heeled Toe Knit Boots, which retail for roughly $1,318. She also carried a floral Louis Vuitton tote bag that’s available for $3,900 on the designer’s website.

Overall, the Hustlers actress referred to her fashion-forward look as. “Bardi,” and we think it’s a perfect fit!

Stars flooded the comments with praise and admiration for the sultry snap. “Where we goin ??‍♀️,” Lizzo commented, while Megan Thee Stallion and Lala Anthony posted a series of flame emojis.

It’s no secret that Cardi B likes expensive statement-making pieces, especially Hermès bags. In October 2020, she showcased her impressive, colorful collection in an awe-worthy Instagram post. “Pick a color,” she cheekily captioned the post as she showed off her custom and classic Birkins.

Just a few weeks after this, the “I Like It” rapper shut down haters after a post made the rounds on social media claiming she and other Black female rappers devalued Hermès’ Birkin bags, making them seem easy to obtain.

“I’ve been seeing this tweet right. It had me and it had other female rappers on it and they were talking about if we could get Birkins from the Hermès store and they [were] also saying how we depreciate the value of a Hermès Birkin bag,” she said at the start of a 4-minute clip. “I find that really interesting because, first thing first, I definitely could get a bag. I don’t want to brag but, it’s like, don’t even try it.”

She went on to point out that people would never ask if or why a white celebrity could get a Birkin. “Another thing is that they’re saying we’re depreciating the value. Actually, we add value because when we mention brands in hip-hop, s–t go up.”

She’s not wrong! A report from Business of Fashion and Lyst in November 2017 claims that searches for those “red bottom shoes” increased by 217 percent after the hit single was released. So who knows, maybe leather harness looks will be the next big trend Cardi B introduces to the mainstream.