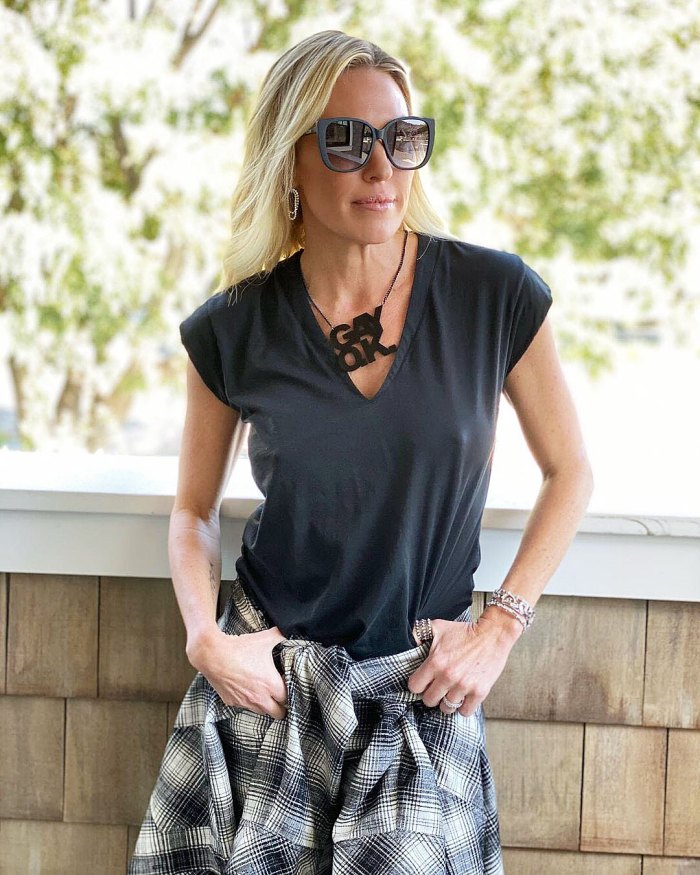 On Sunday, January 10, the Real Housewives of Orange County star was spotted visiting a sex shop and smoke shop in Costa Mesa, California, alongside her husband, Sean Burke. For the occasion, she paired the chunky necklace with black-and-white plaid pants and a sleeveless black T-shirt.

The 42-year-old later shared an up-close look at her accessory in an Instagram post. “Sunday is the perfect day to refuel your soul and to be grateful for all your blessings,” she wrote in the accompanying caption. She also noted that the necklace is from NYC concept store, Unfashional.

In an interview with GLAAD that published on December 2, the Bravo star revealed that she identifies as a lesbian.

“I’m still getting used to it … I knew I was attracted to women,” she told the publication. “I got married very young and I never thought about it. So, to be 42 … I’m just now starting to feel like I’m becoming the woman I was supposed to be. So, for me to be living completely authentically and say, ‘I’m a lesbian. That was who I have always been.’ This isn’t something that is new ‘cause that I think is what a lot of people will think. ‘Oh, suddenly you’re one.’ No, I’ve always known it. But it took me personally 42 years to be comfortable enough in my own skin to say that.”

“Honestly, we are in uncharted territory. I don’t have a role model for this. I don’t have anyone to go to for answers,” she told GLAAD. “So right now, we’re just doing our own way. You know, Sean and I are still married. I plan on staying married … we’re raising the kids together. He’s my best friend.”

During an Instagram Q&A last week, she clapped back at fans who suggested she was being selfish by not separating from Sean. “I don’t own Sean,” she said. “”I’ve been like, ‘Go do whatever you want.’ Sean wants to be here. He wants to be with the kids. We are a family so this isn’t anything I’m doing, it’s where we are right now.”

Watch the trailer for ‘The United States vs Billie Holiday’

Is lockdown really harder for mums who homeschool their children?

The Hot List: This week’s fashion and beauty launches you need to know about