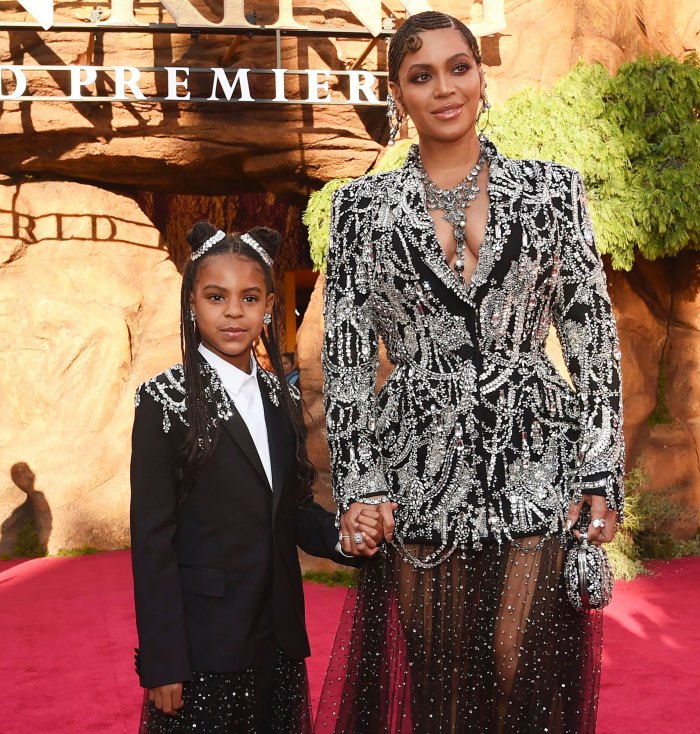 Ice ice, baby! Beyoncé’s daughter Blue Ivy Carter takes center stage in new Icy Park campaign photos, released on February 24. And it’s abundantly clear that the mini model not only has major modeling chops, but that she also has a great head of hair.

Beyoncé, 39, the proud mama that she is, posted two photos of her nine-year-old daughter sporting her namesake brand on beyonce.com, aptly calling the photo Blue Icy.

In the first image, Blue strikes her best model face to the camera while jumping in Adidas x Ivy Park Ultraboost OG Shoes. She’s wearing the Ski Tag Sweat Pants, $100, in multicolor, which have a slouchy fit, cargo pockets, and ski-inspired pattern. She pairs the sweats with the matching Ski Tag Puffer Jacket, which has a retail value of $400.

In the second photo, Blue wears the same outfit but lets her cheeky personality shine through. She’s laughing in the snap, letting us catch a glimpse of her braces.

Blue is makeup free and looks absolutely flawless. It’s her hair, though, that has our jaws quite literally on the ground. While little one is normally photographed rocking her natural hair or a protective style, Blue had her hair straightened for the photo shoot. And twitter was quick to call out how healthy, shiny, and quite frankly fabulous her hair looked.

After @BeyLegion posted a side by side of the two photos, it only took mere moments before the beyhive was flooding the comments.

One user writes, “Remember when people used to talk about Beyoncé because she wouldn’t put rubber bands and other things in Blue’s hair to make others happy? Looking at Blue’s hair now, it seems like @Beyonce knew what she was doing.”

Others couldn’t help but call out the uncanny resemblance between Blue and her mother. “Omg she’s a mini Beyoncé (except with braces for now). So pretty.”

While Blue is clearly the star of the show, it appears that her time in the limelight was totally spontaneous. Tina Knowles, her grandmother, posted a video from the campaign on her Instagram on February 17.

She writes, “My Beautiful grandbaby Blue Ivy looking like a little super model in her Ivy Park. Swing your hair Blue !!!!! She inserted herself into this shoot. No she was not supposed to be in it ! She was just hanging out and got dressed and I guess she said “I’m not gonna tell you what I could do I’m gonna show you” I love that aggressive spirit My Blue Blue!!!! ❤️”