“It’s hard to believe that it’s been a full year since the last Golden Globes,” the actor, 55, said when he took the stage as a presenter. “But like many of us, I have used that time to really look inward and grow. I have understood the nature of crypto currency. I read a book. I finally got around to dyeing my hair gray.”

The New York native added, “And like so many other resilient Americans, I learned to bake — a delicious banana bread in the perfect form of a Golden Globe. Yum!”

The Night at the Museum star lost his dad, Jerry Stiller, amid the coronavirus pandemic. The King of Queens alum died at age 92 in May 2020. 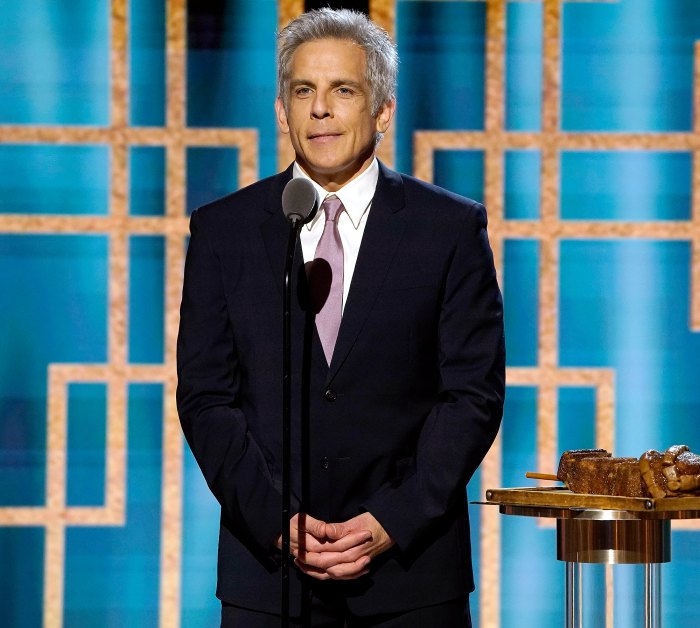 While the late actor’s “last week or two were tougher for him,” Ben said that Jerry “went peacefully.”

The Zoolander star added, “He had a sense of humor, for sure, until the end. I hesitate to call it a sense of humor. He was just funny, and so he was always himself. He was almost 93, and I think his body was kind of at that point where it was time.”

In February 2019, Ben gushed that his dad was “the most naturally funny man in the world” while collecting a win at the Directors Guild of America Awards.

Ben has two kids of his own — daughter Ella, 18, and son Quinn, 15 — with his estranged wife, Christine Taylor. The pair announced their separation in May 2017, writing in a joint statement: “Our priority will continue to be raising our children as devoted parents and the closest of friends.”

They have continued to maintain a “wonderful” relationship. “We’re a big family,” the actress, 49, exclusively told Us Weekly in October 2018. “We’re together all the time.”