Will Smith Raps at Party After Chris Rock Slap

Dancing it out. Despite a dramatic Oscars night and his onstage fight with Chris Rock, Will Smith was solely focused on celebrating his best actor win after the ceremony.

“Will Smith is at the #VanityFairOscarParty dancing with his Oscar to ‘Gettin Jiggy With It,’” Variety‘s executive editor Ramin Setoodeh wrote via Twitter in the early hours of Monday, March 28. In a video from the event, Smith, 53, can be seen dancing and rapping along to the song with his trophy in his hand as he encourages the group of attendees around him to join in the celebration.

The Fresh Prince of Bel-Air alum attended the party with wife Jada Pinkett Smith and his three children: Tre, 29, Jaden, 23, and Willow, 21. The family posed for photos on the carpet before heading inside to celebrate with stars like Lupita Nyong’o, Trevor Noah and DJ D-Nice, who gave Smith a shout-out before playing some of his hits.

The “Summertime” rapper won Best Actor for his performance in King Richard at the 2022 Oscars, though the moment was overshadowed by his fight with Rock, 57, earlier in the evening.

Will Smith and Chris Rock. Shutterstock (2)

While presenting the award for Best Documentary Feature, the comedian made a joke about Pinkett Smith, 50, — who has alopecia — starring in G.I. Jane 2, seemingly referring to her shaved head. In response, Smith stormed the stage and slapped Rock in the face, telling him to “Keep my wife’s name out your f—king mouth,” after returning to his seat.

Ahead of the ceremony, the Ali actor joked that he and his wife “got all dressed up to choose chaos” via Instagram on Sunday, March 27, alongside a video of him and the Pinkett Smith posing in their red carpet ensembles. Three hours later, Smith appeared to joke about his altercation with Rock, writing that “You can’t invite people from Philly or Baltimore nowhere!!” in the comments of his post.

Smith also apologized for the incident during his emotional acceptance speech, explaining that he felt a call to protect his community. “I want to apologize to the academy. I want to apologize to all my fellow nominees. … Art imitates life: I look like the crazy father. Just like they said about Richard Williams,” he said at the time, referring to the coach and father of Venus Williams and Serena Williams, whom he portrayed in King Richard.

He continued: “But love will make you do crazy things. … Thank you for this moment. And thank you on behalf of Richard and the entire Williams family. Thank you. I hope the academy invites me back.” 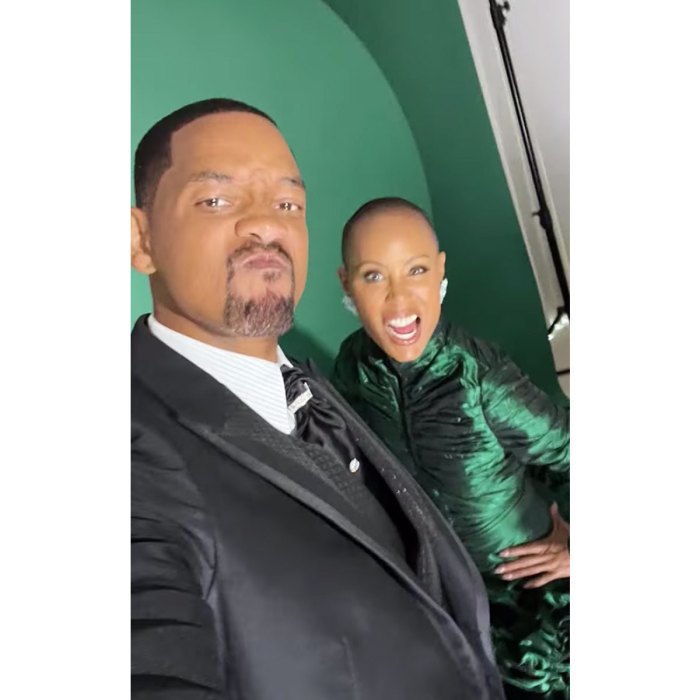 Will Smith and Jada Pinkett Smith. Courtesy Will Smith/Instagram

The Academy of Motion Pictures Arts and Sciences responded to the incident after the show concluded on Sunday, noting in a statement via Twitter that they “do not condone violence of any form.”

The statement continued: “Tonight we are delighted to celebrate our 94th Academy Awards winners, who deserve this moment of recognition from their peers and movie lovers around the world.”

Rock, for his part, has yet to make a statement about the matter. Us Weekly can confirm, however, that he will not be pressing charges.

“LAPD investigative entities are aware of an incident between two individuals during the Academy Awards program,” the Los Angeles Police Department said in a statement to Us on Sunday. “The incident involved one individual slapping another. The individual involved has declined to file a police report. If the involved party desires a police report at a later date, LAPD will be available to complete an investigative report.”