Subtle shade? Travis Barker’s ex-wife, Shanna Moakler, may have finally reacted to the news of his budding relationship with Kourtney Kardashian.

The model, 45, took to Instagram on Tuesday, February 16, to share a photo of herself outdoors in a white bra and a matching skirt. She captioned the post with a lyric from Jessie Reyez’s song “Do You Love Her,” writing, “‘And I should Goodfella you, call me Karen, waking up to my Beretta’” alongside an anchor emoji.

In the comments section, one fan allegedly wrote, “Shhhhiiiii that broad don’t got nothin’ on you. Travis downgraded big time.” E! News reported that Moakler “liked” the comment, which has since been deleted. 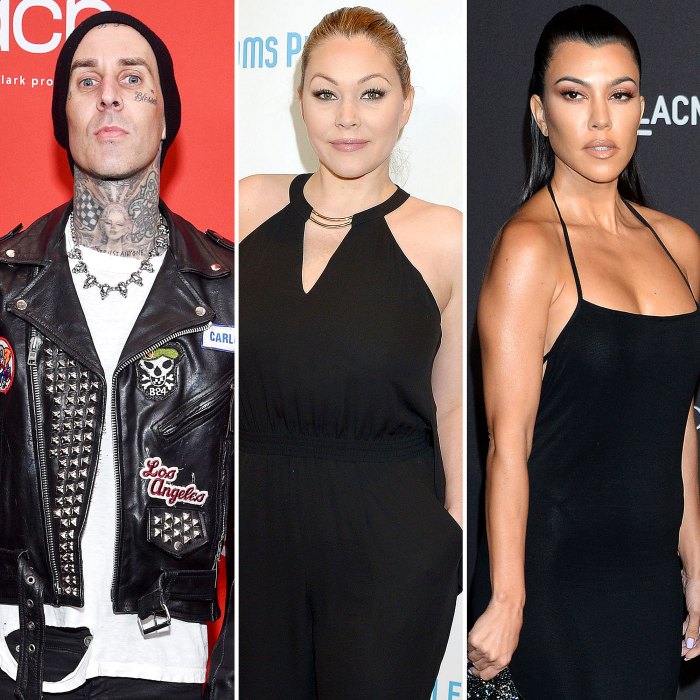 Barker, 45, and the former Playboy Playmate married in October 2004 and have two children together: son Landon, 17, and daughter Alabama, 15. The Blink-182 drummer filed for divorce from Moakler in August 2006, though they continued to see each other on and off in the months that followed. Eventually, they decided to go their separate ways for good, finalizing their divorce in February 2008. (The former pageant queen also shares daughter Atiana, 21, with ex-fiancé Oscar De La Hoya.)

After a brief relationship with Rita Ora in late 2015, Barker moved on with his longtime friend Kardashian, 41. Us Weekly confirmed in January that he was dating the Keeping Up With the Kardashians star, with a source revealing the pair have been together “for a couple months.”

A second insider exclusively told Us that the couple’s children helped bring them together. Kardashian shares sons Mason, 11, and Reign, 6, and daughter Penelope, 8, with Scott Disick, whom she dated from 2006 to July 2015.

“Travis and Kourtney’s kids are very close,” the insider said. “They became friends living in the same neighborhood and hang out a lot. Their kids’ friendship had Kourtney and Travis spending a lot of time together.”

The reality star and the Grammy nominee made their relationship Instagram official on Tuesday, February 16, by sharing a close-up photo of them holding hands. The move came two days after they spent Valentine’s Day together.

“Both of their families are supportive,” a third source exclusively told Us. “It’s still very new, but they are both very excited by how easy it all has been.”