Jenelle Evans claimed in a series of Tik Tok videos on Saturday, January 16, that she has regained custody of her eldest son, Jace, from her mother, Barbara Evans.

“This is a little PDA announcement,” the former Teen Mom 2 star, 29, said in the clips posted to her Instagram Stories. “You are probably watching Teen Mom on Netflix right now as we speak and if you are, good. That was the old me. That was the young me, the stupid me, the me that took risks.” 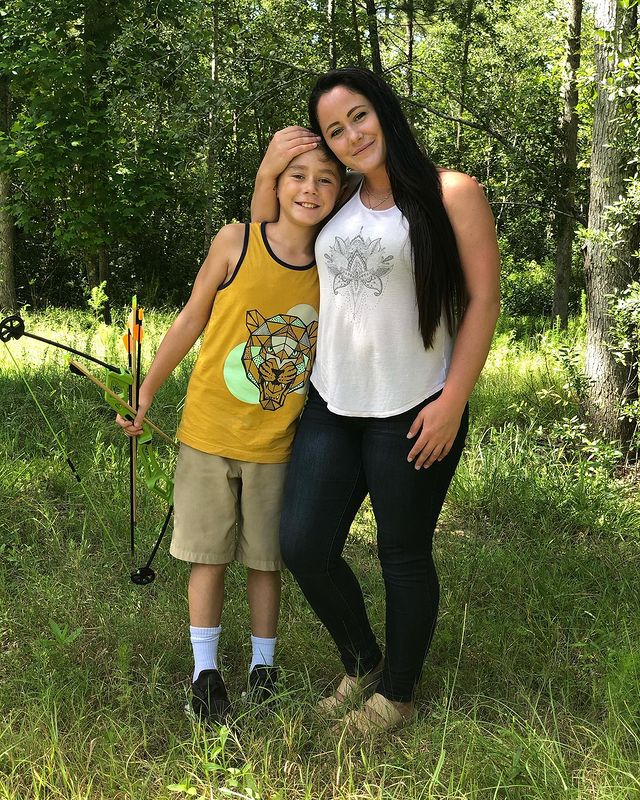 “I have custody of Jace. He lives with me now full-time,” the mother of three concluded, referring to her son with ex Andrew Lewis. “My kids are happy, they’re healthy. That’s all that f—king matters. But I totally get it, I would hate me too if I was watching me. But if you catch up with me now, I’m doing a lot better, you guys. Peace, love, happiness, bitches.”

The former MTV star’s announcement came amid a thawing of her turbulent relationship with her mother. Barbara, who has had custody of Jace for most of his life as her daughter was in and out of jail and battled heroin addiction, posed for holiday photos with Jenelle and her family in December.

She also celebrated Christmas with her daughter and Jace, 11, along with Jenelle’s husband, David Eason, and their daughter Ensley, 3, as well as Eason’s daughter from a previous relationship, Maryssa, 13, and Jenelle’s son Kaiser, 6, who she shares with ex-fiancé Nathan Griffith.

The 16 and Pregnant alum and her husband temporarily lost custody of Ensley, Kaiser and Maryssa after Eason, 31, admitted to shooting and killing the family’s French bulldog, Nugget, after claiming it nipped at Ensley in April 2019. Jenelle was fired by MTV over the controversy.

The couple regained custody of the children in July after a court battle but in October 2019, the Read Between the Lines author announced that she and Eason had split. She moved to Nashville and said she’d “filed papers” to end her marriage. The following month Jenelle also filed for a restraining order against her estranged husband, accusing him of both physical and emotional abuse.

The former reality TV star had previously called 911 in October 2018 and June 2019, claiming her husband was violent, but in a YouTube video in March 2020, Jenelle told fans that she and Eason had decided to “work things out.”

“I want to tell you guys that David has never abused the children, he’s never abused me,” she added. “We’ve always had disagreements and those would turn into big arguments and this is the reason why I decided to go back home and work out my relationship because ultimately it’s for my family.”

The pair briefly split again in June 2020 after the pipe welder was arrested for assault with a deadly weapon and communicative threats following an alleged altercation with two of Jenelle’s friends as the men helped her move out of their rural North Carolina home. The Ashley’s Reality Roundup reported in August that the charges were dropped.