The actor, 47, and Fox, 34, have managed to remain civil through their split, according to the Dancing With the Stars pro, 35.

“I think they’re doing a great job with managing their situation, so I’m grateful that I’ve been able to fit into it — into their world,” she gushed during a Friday, February 19, interview on Australia’s The Morning Show.

Burgess also weighed in on Green and Fox’s three kids, Noah, 8, Bodhi, 7, and Journey, 4, praising them and their parents. 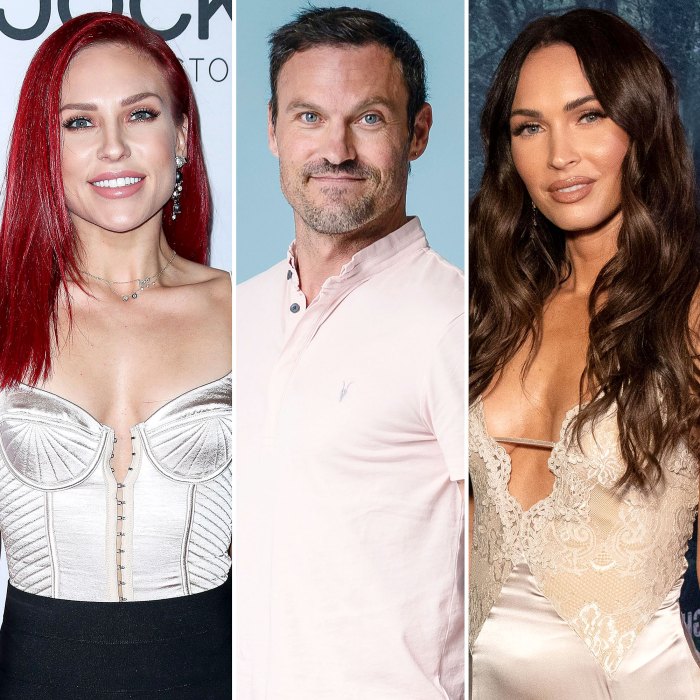 “He’s a wonderful dad, and he and his wife — uh, ex-wife — have raised three beautiful children,” she said during the Australian morning show. “And they are so wonderful and sweet and kind and considerate, and they’ve done such an amazing job.”

The Beverly Hills, 90210, alum recently fawned over Burgess via Instagram Live on Sunday, February 14, following the couple’s Valentine’s Day retreat with his kids. The pair revealed that they’d just come back from Big Bear, California.

“This has been kind of a weird year for me so what an amazing Valentine’s Day this has been,” he started, with Burgess sitting next to him. “Sharna is a really amazing considerate, loving, kind person. I kind of feel like when you put yourself in a space where you on some level decided that you’re gonna surround yourself with people that help you move forward on a path instead of pulling you back, that they do that.”

The actor credited his Australia native girlfriend with pushing him in a new direction in life after calling it quits with Fox. “Sharna’s been amazing in my life, not only for that reason, but that’s been a big thing for me,” he said before the pair shared a kiss.

Green added, “This could be the start of something amazing.”

Burgess returned the favor with kind words for her beau. “This one took me completely by surprise,” she revealed in the clip. “I’ve never known a man like him.”

Green and Fox, who married in 2010, announced their split in May 2020 and both have since moved on. Us Weekly confirmed the Anger Management star’s relationship with Burgess in January while Fox is dating Machine Gun Kelly.

A month before Us reported on the budding romance between Green and Burgess, the professional dancer teased her relationship status in an interview. She revealed to Us at the time that she was dating and her new man was someone famous. “[This one] feels different to all the rest of them,” she said at the time.

Boy, 15, arrested over murder of cab driver stabbed to death ‘by own passenger’ outside north London school