Her lips are sealed! Sharna Burgess didn’t give fans an inch when asked about her relationship with Brian Austin Green during an Instagram Q&A.

The Dancing With the Stars pro, 35, dodged a question about her love life during the late-night social media session on Friday, January 8. 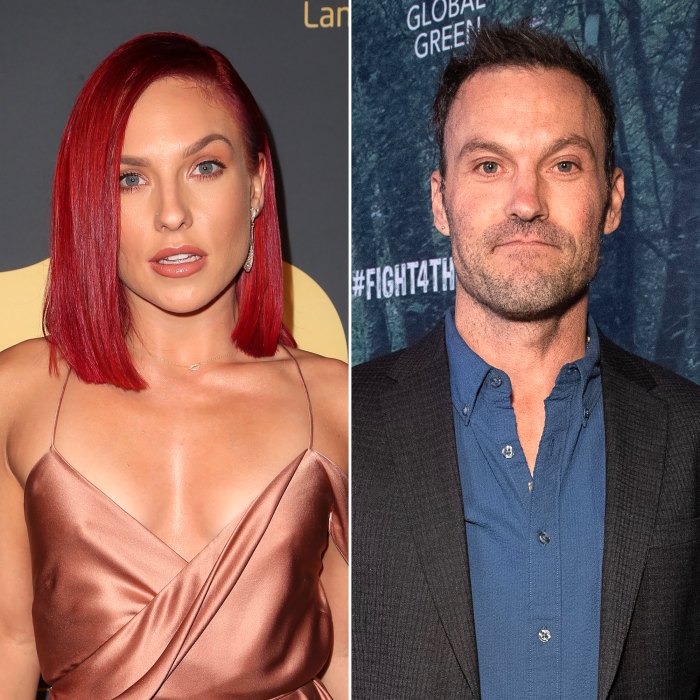 “Lol. Y’all don’t give up on this one,” she replied on her Instagram Story. “It’s almost impossible to fish out real questions amidst the ones about my relationship status.”

Burgess continued, “I say this with love and kindness. Let it go.”

Another fan told the Australian dancer that they “love that you embraced being single so you could fall in love with yourself.” Burgess said it was the “best thing” she could have done. 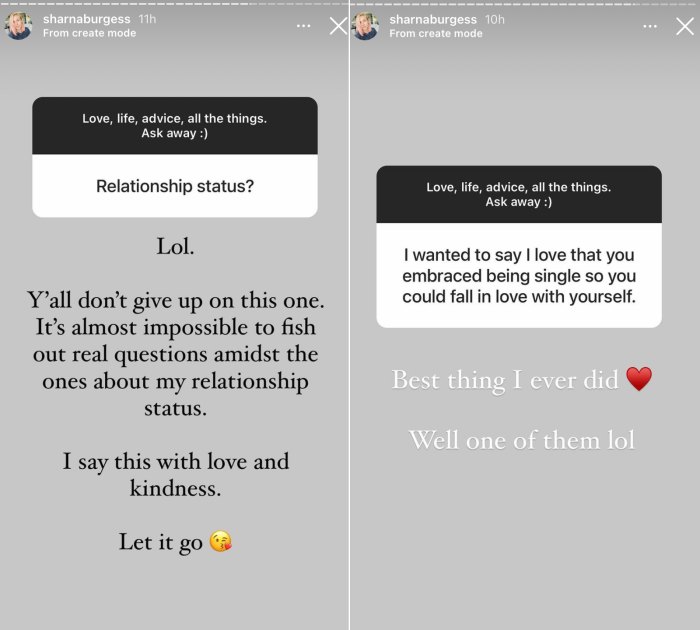 “Well one of them lol,” she added.

Questions about Burgess’ relationship came three days after she and Green, 47, were spotted kissing on the beach in Hawaii. Pictures obtained by E! News showed Burgess and the Beverly Hills, 90210 alum making out during their getaway at the Four Seasons Resort in Hualalai.

The duo still hasn’t confirmed their romance, but posted several pictures from their PDA-packed trip. On New Year’s Day, Green shared a snap of himself in a pool with the caption, “Let’s all find the connection to love and togetherness again.”

Burgess, for her part, encouraged her Instagram followers to go into 2021 with “love.”

“How does one begin to sum up a year that has been equal parts devastating and incredible? I honestly don’t know,” she wrote in the caption. “The state of the world and the global experience of 2020 aside, I feel like this was the year when many of my lessons truly clicked. When what I have been practicing and preaching finally just became what is. I feel more myself, more settled, more focused, more clear than I think I ever have. More connected to me than I ever have.”

She closed the message by saying, “We cannot change what we cannot control, so we must focus on how we act and react to the world around us. I choose to react with kindness, respect, understanding, optimism, positivity, wholehearted gratitude and above all else, love. Love for myself, love for my people, and love for even those who haven’t got it for me…yet.”

Green was previously in a relationship with estranged wife Megan Fox. The pair tied the knot in Hawaii in June 2010 at the same resort he and Burgess vacationed at. The Anger Management alum confirmed their split in May 2020 and Fox, 34, filed for divorce in November. They share three sons: Noah, 8, Bodhi, 6, and Journey, 4. Green also shares 18-year-old son Kassius with ex-fiancée Vanessa Marcil. The Transformers actress has moved on with Machine Gun Kelly.

Burgess hinted to Us Weekly that she was in a relationship with someone new and famous before jetting off to Hawaii with Green.

“It’s been really awesome,” she exclusively told Us in December 2020. “I actually am not on the market anymore. But it’s very new and very, you know, it’s dating, essentially. No one’s calling us a relationship yet.”