The end of the road. Scott Disick and Amelia Gray Hamlin have officially split, multiple sources exclusively confirm to Us Weekly.

“Amelia was the one who ended things,” one insider tells Us. Disick, 38, and Hamlin, 20, who were first romantically linked in October 2020, have been in a tough spot since Kourtney Kardashian‘s ex-boyfriend Younes Bendjima shared DMs allegedly from Disick on August 31.

“Yo is this chick ok!????? Brooo like what is this. In the middle of Italy,” the Flip It Like Disick alum reportedly messaged the former boxer, 28, about their mutual ex’s PDA with Travis Barker.

The Poosh founder and Disick dated on and off from 2006 to 2015 and share son Mason, 11, daughter Penelope, 9, and son Reign, 6. The reality star and Bendjima had an on-off romance for three years until 2019.

However, the Talentless designer’s split from the model “wasn’t related to the messages Scott sent about Kourtney,” the source tells Us. “This breakup was coming regardless.”

A second insider adds, “They’re both taking it in stride.”

On Monday, September 6, Lisa Rinna and Harry Hamlin‘s daughter posted a telling quote via social media, hinting at a split.

“Never settle for less. Not with your jobs, your friends, and especially not with your heart,” the statement said. “Continue to seek what you are looking for and do not shrink yourself for the sake of other people. You deserve the best.”

She added the caption, “This is it.”

One day prior, Hamlin was spotted rocking a “Don’t you have a girlfriend?” T-shirt. 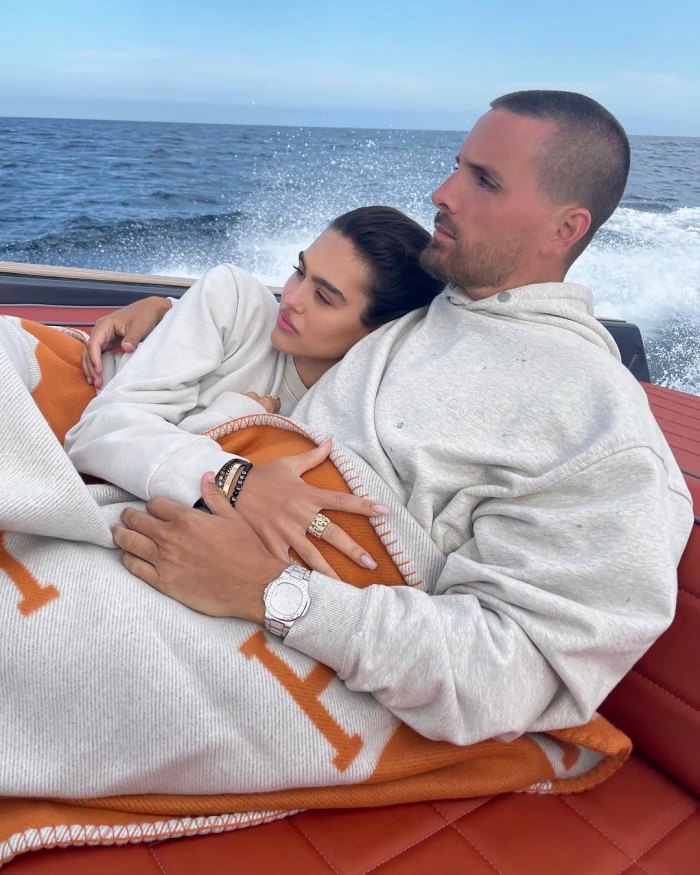 Following the social media drama, a source exclusively told Us that the Los Angeles native was trying her best to be there for her boyfriend during the rocky time.

“Amelia is standing by Scott’s side and is just supporting him. She knows what he thinks about Kourtney and Travis, so she more just feels bad that Younes did that to Scott,” the insider said at the time. “She’s embarrassed for him.”

Additionally, the source noted that Disick was not happy about his message being shared.

“He DM’d him when he was in a heated moment and was just looking for him to react the same way being that they both dated Kourtney. Scott’s sick of seeing photos of them splashed everywhere,” the insider added, noting that he’s “riled up” by how Barker, 45, and Kardashian’s relationship is affecting his bond with the mother of his children. “It’s more strained than ever. He’s trying to be the best parent he can be for their kids and make it work coparenting but he’s having problems now with Kourtney. He doesn’t think she should be showing off too much PDA because of their rated R-behavior and the kids are still young and can easily find paparazzi photos of them on their phones. He’s worried that she’s going to try to put a wedge between him and the kids.”

Come Dine With Me: Are Dave Lamb and Larry Lamb related?

Love Is Blind’s Jessica Batten Is Engaged to Benjamin McGrath