“I think that interview opened up conversations that people weren’t prepared to have or didn’t want to have,” the broadcast journalist, 66, said on a Thursday, April 1, Drew Barrymore Show appearance. “But I think, ultimately, it’s about a family that wants to be united and be together and I’m hoping that will be the case.” 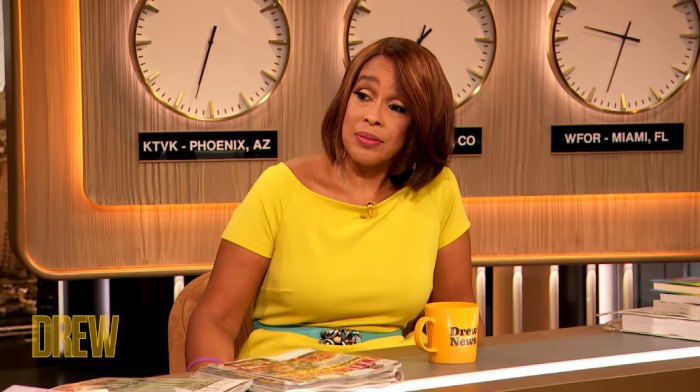 Noting that some conversations can be “very difficult,” the Maryland native added, “There’s nothing healthy when you don’t talk, so let’s all wish that for all involved in that particular story.”

In the couple’s CBS interview, which aired last month, Harry, 36, and Meghan, 39, spoke candidly of their fractured relationships with the royal family members. Not only did the Suits alum detail the institution’s reaction to her suicidal thoughts, but the former actress also reflected on the “concern” a family member had about her 22-month-old son Archie’s skin color ahead of his birth.

The following week, King revealed that Harry and Prince William had spoken after the interview. “Harry has talked to his brother and he has talked to his father, [Prince Charles], too,” the CBS This Morning cohost said at the time. “The word I was given was that those conversations were not productive, but they are glad they at least started a conversation.”

King’s comment left the Duke of Cambridge, 38, “reeling,” a source exclusively told Us Weekly on Thursday, April 1, adding that William “now feels uncomfortable” talking to his younger brother on the phone.

“The problem with Harry is that he’s hooked on being right and regardless of saying he wants to move on from this, he won’t back down until he gets some form of apology from his family,” the insider said.

William first addressed the bombshell revelations on March 11, telling reporters that his family was “not racist.”

A Buckingham Palace statement at the time read, “The whole family is saddened to learn the full extent of how challenging the last few years have been for Harry and Meghan. The issues raised, particularly that of race, are concerning. Harry, Meghan and Archie will always be much loved family members.”

The pair stepped back from their roles as senior royal family members in January 2020, and their exit was made official in February of the following year. After living in Canada and Los Angeles, they have ultimately chosen to purchase property in Montecito, California, where they are awaiting their second child’s arrival.