Blurring the lines! Robin Thicke candidly opened up about going to therapy with his fiancée, April Love Geary, and his ex-wife, Paula Patton, in a new interview.

“Therapy is not for everybody all the time, but it definitely opens barriers for us, even just to go once or twice,” the “Sex Therapy” singer, 43, said in Us Weekly’s exclusive sneak peek of the Wednesday, February 17, episode of the “Black Girls Texting” podcast on PodcastOne’s LadyGang Network. “If you’re struggling in your relationship, one visit, one conversation with a third party can change things.” 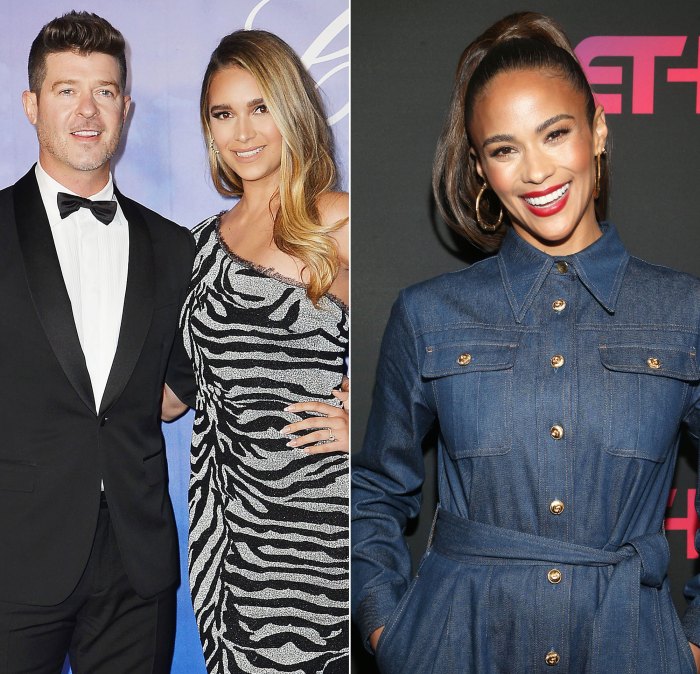 Thicke acknowledged it is “totally understandable” that some people may not “want to do [therapy] every week” or “put that on your schedule,” but he personally thinks there are times when it becomes necessary.

“Their marriage was unraveling for a long time,” a source told Us at the time.

Patton filed for divorce from Thicke later that year and subsequently accused him of domestic abuse, infidelity and drug use. He denied the allegations and quested why she raised them “in the midst of a custody dispute.”

The former couple finalized their divorce in 2015, the same year that the Masked Singer judge and Geary, 26, went public with their relationship. He and the model got engaged in 2018 after welcoming daughter Mia, now 2. They went on to have two more children together: daughter Lola, 23 months, and son Luca, 2 months.

Thicke recently opened up about how the COVID-19 pandemic has helped him slow down and spend more time with his family.

“I love performing. I’d love to be on a tour,” he told USA Today on Friday, February 12. “But being at home and being a dad, that’s where I’m most comfortable. Right now, I pretty much run a daycare center in my home so I’ve had plenty to do. The kids inspire me and bring me joy.”

Your $1,400 stimulus check could be delayed even more because of key stumbling block in Biden’s $1.9T bill

Floating Points and Pharoah Sanders team up on new album