Family first. Queen Elizabeth II and Prince Philip are the longest-married couple in the history of the British royal family, with many children, grandchildren and great-grandchildren to show for it.

The pair wed in 1947, five years before the queen ascended to the British throne. They welcomed their first child, Prince Charles, who is first in line for the throne, in 1948. Elizabeth and the Duke of Edinburgh also share daughter Anne, Princess Royal, Prince Andrew and Prince Edward.

“He has, quite simply, been my strength and stay all these years, and I, and his whole family,” Her Majesty said of her husband in November 1997 on the couple’s 50th wedding anniversary. “This and many other countries, owe him a debt greater than he would ever claim, or we shall ever know.”

As the duo grew in love — they’ve been together for seven decades — so did their family. All four of their children have two kids of their own, with Princess Anne’s son, Peter Phillips (born in 1977) and daughter Zara Tindall (1981) becoming the queen’s first grandchildren.

Prince Edward and his wife, Sophie, Countess of Wessex’s kids are significantly younger than their cousins, with Lady Louise and James, Viscount Severn being born in 2003 and 2007, respectively.

The Queen has continued to cater toward her family while balancing her duties as Sovereign of the United Kingdom. She is especially close with her grandsons William and Harry and has a special bond with William’s wife, Kate Middleton.

“She’s really taken Kate under her wing,” a source told Us Weekly exclusively in April 2019. “The two of them will often spend hours discussing royal life and the future of the monarchy.”

A second source said that the Duchess of Cambridge and the queen sometimes “casually catch up over afternoon tea” while other meetings include “intense one-on-one training about taking on the crown.”

When Princess Beatrice married Edoardo Mapelli Mozzi in July 2020, she wore her grandmother’s vintage gown and diamond fringe tiara. The tiara was previously worn by both Her Majesty and Princess Anne on their wedding days.

Princess Eugenie, on the other hand, named her firstborn son, August Philip Hawke, whom she shares with husband Jack Brooksbank, in honor of her grandfather in February 2021.

Although Prince Harry and his wife, Meghan Markle, stepped back from their roles as senior royals in January 2020, and have since relocated to California, Elizabeth and Philip have tried to maintain their strong relationship with their grandson and his firstborn, Archie.

“The last thing Elizabeth wants is for Harry to feel estranged from his family,” a source told Us in March 2020. A second source added that Harry “feels terrible about hurting his grandmother, whom he adores” because of his family’s decisions. A third source revealed in February 2021 that the queen FaceTimes with Archie and is “desperate” to give him a hug.

Scroll down for a look at four generations of Queen Elizabeth II’s royal family tree. 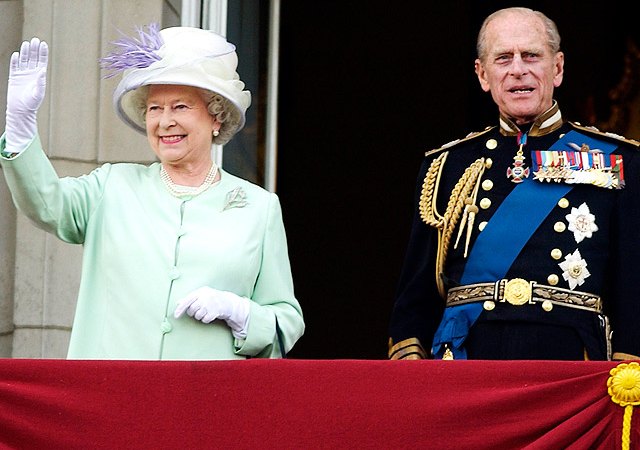 Born April 21, 1926, to Prince Albert, Duke of York (later King George VI), and his wife, Elizabeth, Elizabeth II was third in line to the throne, behind her uncle and her father. In 1947 she married Prince Philip of Greece and Denmark, now the Duke of Edinburgh; together they had four children: Prince Charles (born 1948), Princess Anne (1950), Prince Andrew (1959), and Prince Edward (1963). 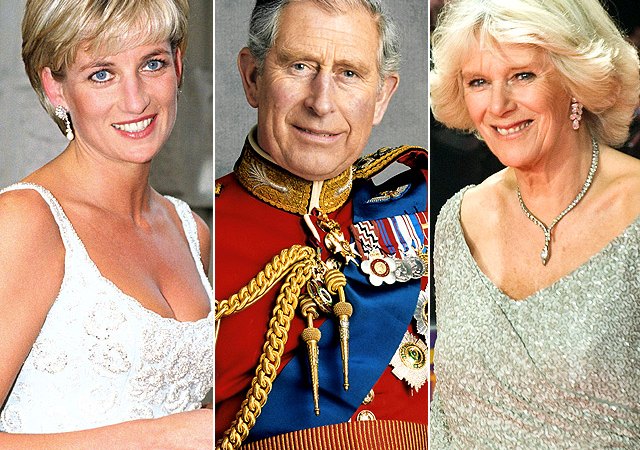 Queen Elizabeth II’s eldest child, Charles, Prince of Wales, was born November 14, 1948, and is the longest-serving heir apparent in British history. In 1981, he married Lady Diana Spencer, with whom he had two sons, Prince William and Prince Harry. The couple divorced in 1996. The following year, Diana died. Charles wed Camilla Parker Bowles in 2005. 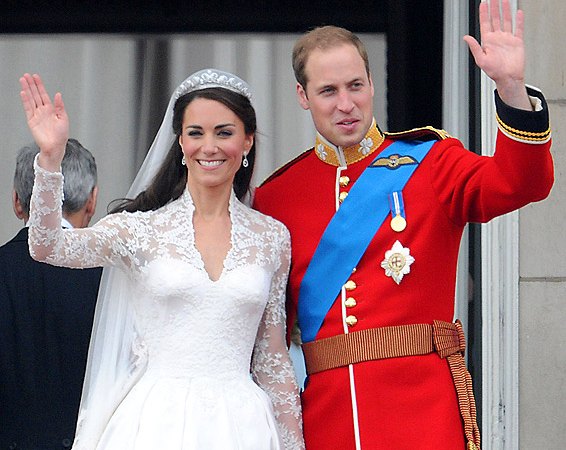 Prince William and Kate Middleton, the Duke and Duchess of Cambridge 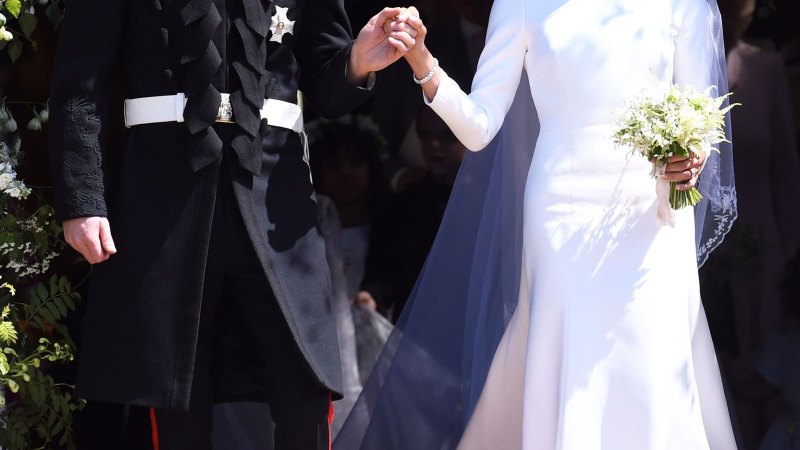 Prince Harry and Meghan Markle, the Duke and Duchess of Sussex

Born Prince Henry of Wales but commonly known as Prince Harry, Prince Charles and Princess Diana’s younger son was welcomed into the world on September 15, 1984. He is Queen Elizabeth II and Prince Philip’s fourth grandchild, and the sixth in line for the throne. A captain in the Blues and Royals of the British Army, Harry has served twice on the front line in Afghanistan.

Harry married former actress Meghan Markle in May 2018. The pair welcomed son Archie in May 2019 and announced in February 2021 that they are expecting their second child. 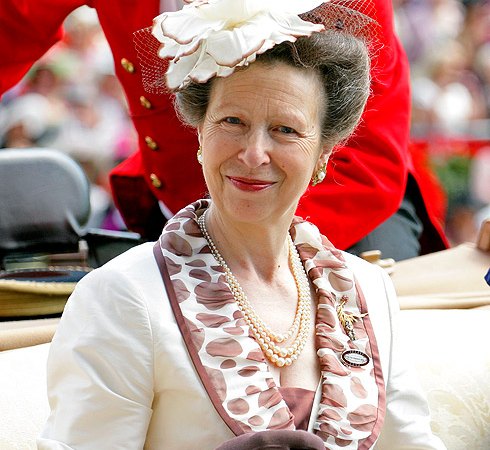 Anne, Princess Royal, is Queen Elizabeth II and Prince Philip’s only daughter. At the time of her birth on Aug. 15, 1950, she was third in line to the throne; as of 2013, however, she’s 10th. From 1973 to 1992, she was married to Captain Mark Phillips, with whom she had two children, Peter Phillips and Zara Phillips. Since 1992, she has been married to Vice Admiral Sir Timothy Laurence. 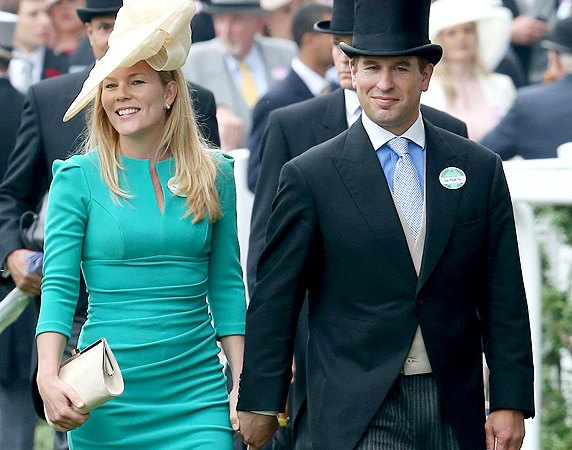 Peter Phillips, born November 15, 1977, is 11th in line to the throne but holds no royal title and carries out no royal duties. A graduate of the University of Exeter, Phillips married Canadian management consultant Autumn Kelly in 2008. They gave the Queen her first great-grandchild, a baby girl named Savannah Anne in 2010, and in 2012, Kelly gave birth to a second daughter, Isla Elizabeth. The pair announced their separation in February 2020, after 12 years of marriage. 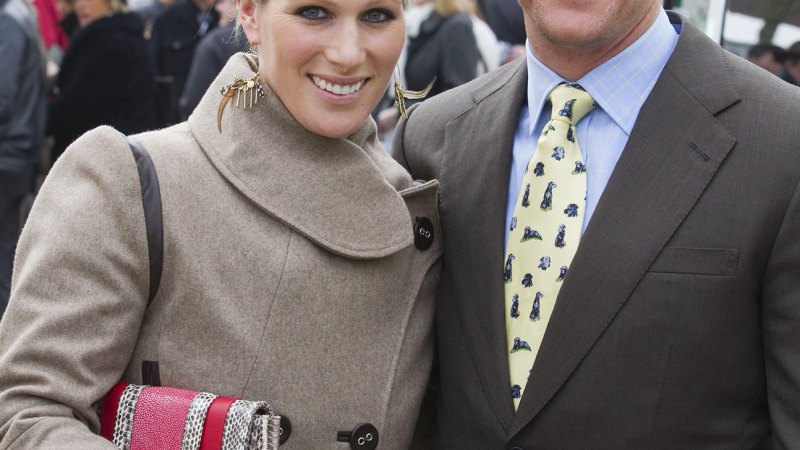 A respected British equestrian, Zara Phillips was born to Princess Anne and Mark Phillips on May 15, 1981. She is the second-eldest grandchild of Queen Elizabeth II, and 14th in the line of succession to the throne, though as the daughter of the Princess Royal, she holds no royal or noble title. Married to rugby player Mike Tindall, Phillips is the mother of daughters Mia (born 2014) and Lena (born 2018). The queen’s eldest granddaughter announced in December 2020 that the couple are expecting their third child. 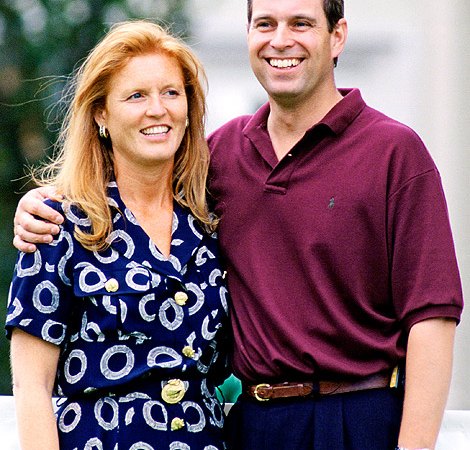 Prince Andrew and Sarah Ferguson, the Duke and Duchess of York

Queen Elizabeth II gave birth to Prince Andrew on Febuary 19, 1960, eight years into her reign. A commander and honorary rear admiral in the Royal Navy, he’s currently fourth in line to the throne, behind Princes Charles, William, and Harry. In 1986, he married Sarah Ferguson, with whom he had two daughters, Beatrice (1988) and Eugenie (1990). Two years after Eugenie’s birth, however, the Duke and Duchess of York announced their separation; they officially divorced four years later, in 1996. 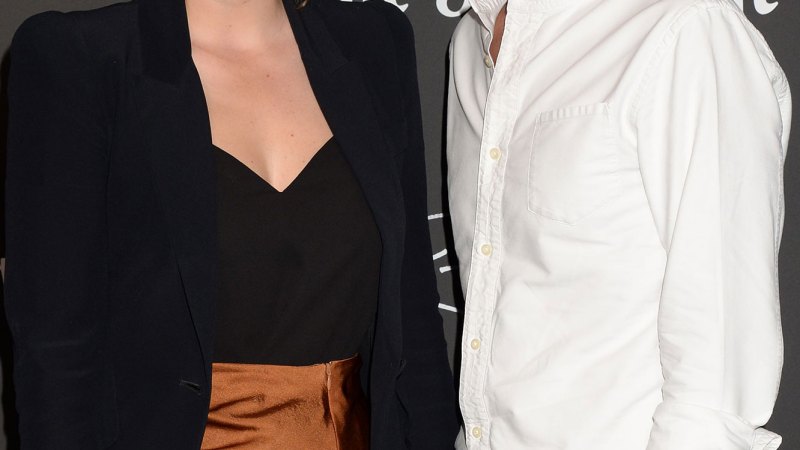 Princess Beatrice is the firstborn daughter of Prince Andrew and Sarah Ferguson. She was born on August 8, 1988, and is the queen’s fifth grandchild. The Goldsmiths, University of London graduate married Edoardo Mapelli Mozzi in July 2020 amid the coronavirus pandemic. Beatrice wore a vintage dress by Norman Hartnell, which belongs to the Queen and the Her Majesty’s diamond fringe tiara, which she wore on her wedding day in 1947. 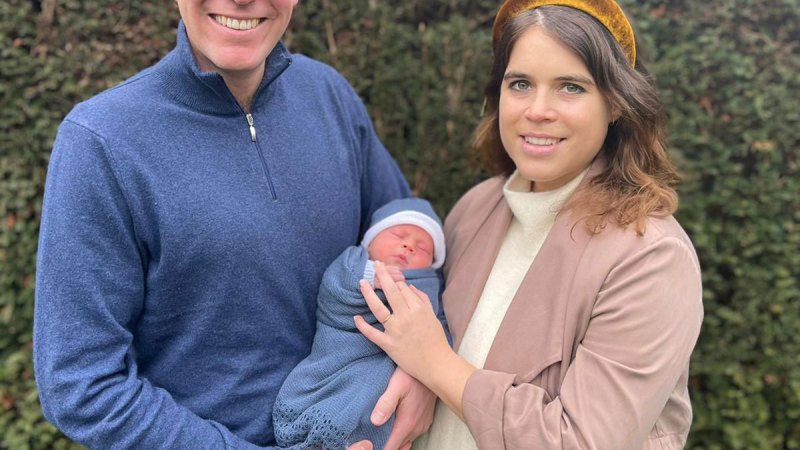 Born March 23, 1990, Princess Eugenie is the second child of the Duke and Duchess of York, and the younger sister of Princess Beatrice. Eugenie is Her Majesty’s sixth grandchild and falls in line for the throne behind Beatrice. She married her longtime love, Jack Brooksbank, at St. George’s Chapel at Windsor Castle on October 12, 2018. The couple welcomed their first child, son August Philip Hawke, on February 9, 2021. 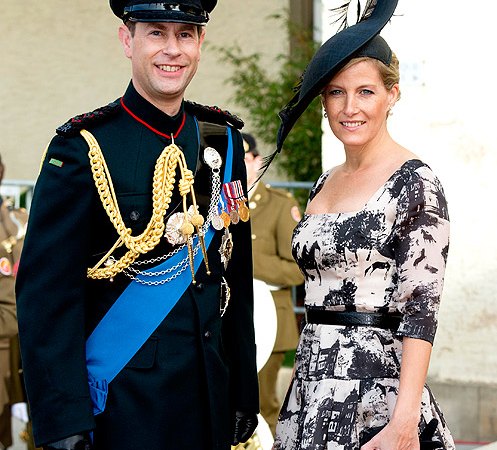 Prince Edward and Sophie Rhys-Jones, the Earl and Countess of Wessex

The fourth child of Queen Elizabeth II and Prince Philip, Prince Edward was third in line to the throne at the time of his birth on March 10, 1964. He’s currently seventh, behind his older brothers and their four children. Married since 1999 to Sophie Rhys-Jones, a former public relations executive, Edward, Earl of Wessex, has two young children with his wife: Lady Louise Windsor (2003) and James, Viscount Severn (2007). 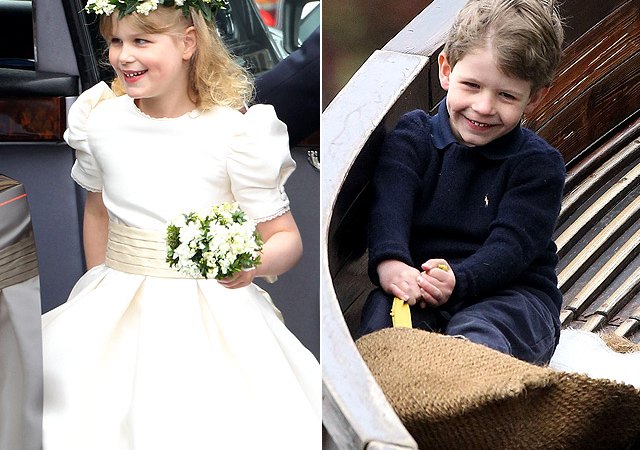 Born November 8, 2003, Lady Louise is the youngest granddaughter of Queen Elizabeth II and Prince Philip, and ninth in the line of succession to the throne. In April 2011, she appeared as a bridesmaid at cousin Prince William’s wedding to Kate Middleton. Both she and her younger brother — James, Viscount Severn, born December 17, 2007 — have lakes named after them in Canada.

The Duke and Duchess of Cambridge’s daughter, Charlotte, was born on May 2, 2015. She is fourth in line to the throne. 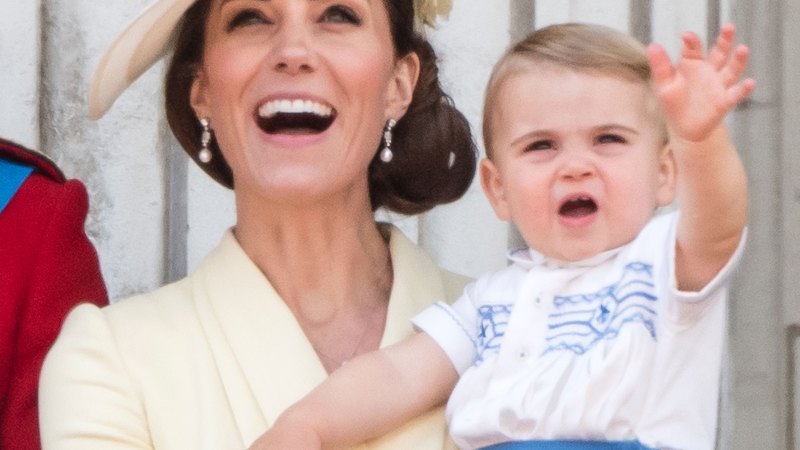 Harry and Meghan’s first child was born on May 6, 2019. While the parents opted not to give their son an official royal title, he is seventh in line to the throne.