Going the distance. Prince Harry is traveling to England to join his family at Prince Philip‘s funeral following his death, Us Weekly exclusively confirms, but he won’t have wife Meghan Markle by his side.

“Meghan will be staying in California. She can’t go on doctor’s orders,” a source tells Us of the pregnant Suits alum, 39. “She is too far along to fly and it’s recommended she rest in the final months.”

The Sussexes revealed in February that Meghan is expecting their second child after previously suffering a miscarriage last summer. The pair’s pregnancy news came days before Buckingham Palace confirmed that they would not be returning as working members of the British royal family following their initial step back from their senior roles in March 2020. As they prepare to welcome their little one, the duo are being “extra careful” when it comes to Meghan’s health. 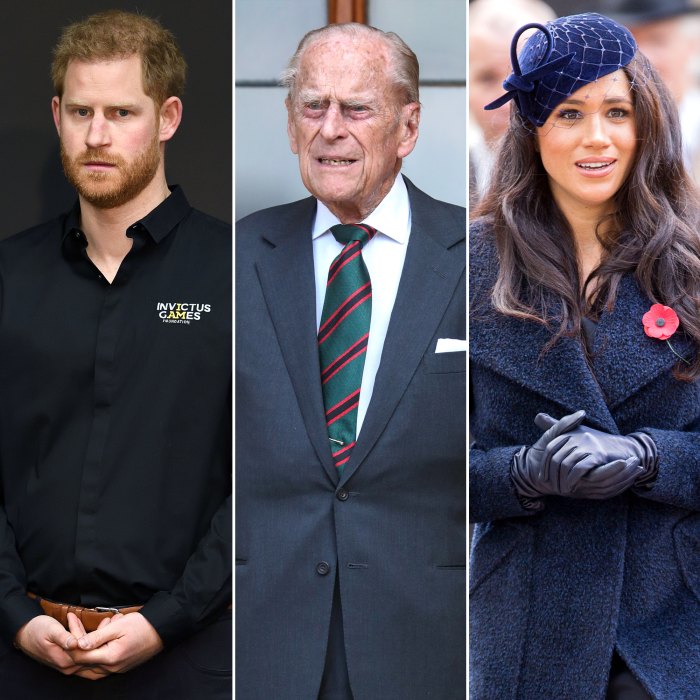 “They’re taking this precaution seriously because she miscarried before,” the source adds. “Doctors don’t think the stress of it all is worth her risking losing another baby.”

Though she won’t be attending the memorial service, the California native is keeping her grandmother-in-law, Queen Elizabeth II, in her thoughts. “Meghan and Harry have already spoken to the queen to express their sympathies,” the source says.

Buckingham Palace announced on Friday, April 9, that the Duke of Edinburgh died at 99. “The Royal Family join with people around the world in mourning his loss. Further announcements will be made in due course,” a statement from the royal family said.

A separate source revealed on Friday that the queen is “heartbroken” after the loss of her husband of more than seven decades, who was hospitalized earlier this year after feeling unwell. Philip was discharged in March after undergoing a “successful” surgery.

Planning for Philip’s funeral is already underway, but the affair will be much more scaled back due to the coronavirus pandemic. Instead of receiving a state funeral, Philip will be honored in a military-style event followed by a private burial. With the country still under lockdown as a precaution against spreading COVID-19, the royal family doesn’t want their celebration of Philip’s life “to have a negative impact on the U.K.’s pandemic protocols,” a second source told Us on Friday.

Shortly after news broke of Philip’s passing, Harry, 36, and Meghan paid tribute with a statement on their Archewell website. With the couple residing in California after their royal exit, the distance between Harry and the rest of his family across the pond was beginning to weigh on him.

“Harry feels guilty for not being there to say goodbye to Prince Philip in person,” a third source revealed on Friday, while another insider told Us that the former military pilot “had a close bond” with his late grandfather.