By their side. One month after Prince Harry and Meghan Markle’s CBS tell-all, Idris Elba reacted to their bombshell claims about the royal family.

“I will say that everyone has to have their opportunity to speak up about what they feel, you know,” the actor, 48, told Entertainment Tonight on Thursday, April 1. “You cannot take someone’s voice away. That’s all we have to communicate.”

The Luther alum DJ’d for their wedding reception at the Frogmore House in Windsor in May 2018, telling Ellen DeGeneres the following year that he thought the former military pilot’s request was a “joke.” 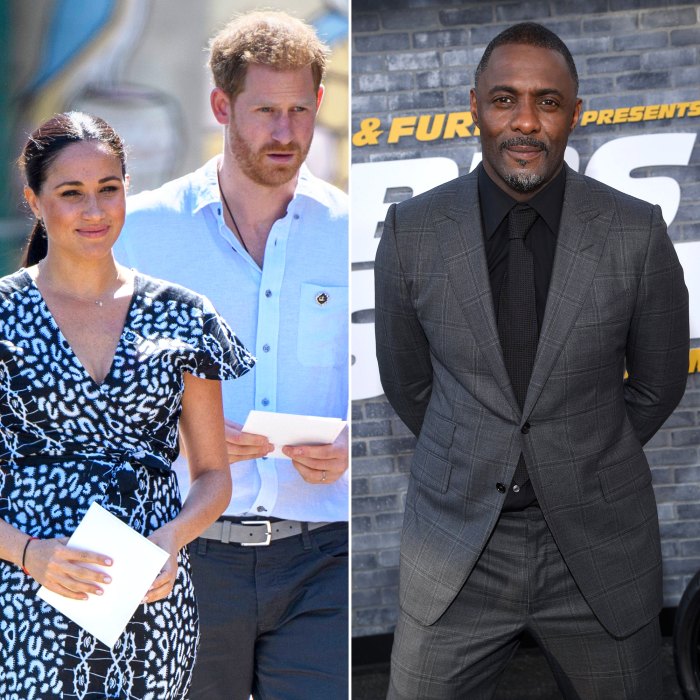 “Harry and I have hung out a couple of times through his dad [Prince Charles‘] charity, The Prince’s Trust, which helped me out when I was a young actor. Harry came to a couple of parties that I DJed and he was like, ‘What are you doing on [May 19]?’” Elba recalled in May 2019. “I told him nothing and then he asked if I would DJ at his wedding.”

The couple opened up about their nuptials in the March CBS interview, revealing that they got married three days before their televised wedding.

“We called the Archbishop [of Canterbury, Justin Welby] and we just said, ‘Look, this thing, this spectacle is for the world, but we want our union between us,’” the Suits alum, 39, said at the time. Amid rumors this wasn’t the case, the couple’s spokesperson told Us Weekly in a statement that they hadn’t legally married until May 19.

The former actress also spoke candidly about battling suicidal thoughts while pregnant with their first child, son Archie, due to negative press. “I just didn’t see a solution. I would sit up at night, and I was just, like, I don’t understand how all of this is being churned out,” the Los Angeles native explained. “I realized that it was all happening just because I was breathing. I was really ashamed to say it at the time and ashamed to have to admit it to Harry, especially, because I know how much loss he’s suffered. But I knew that if I didn’t say it, that I would do it. I just didn’t want to be alive anymore. And that was a very clear and real and frightening constant thought.”

While Meghan wanted to seek help for her mental health, she claimed that the royal institution said that she “couldn’t [because] it wouldn’t be good” for them. “I remember this conversation like it was yesterday, because they said, ‘My heart goes out to you, because I see how bad it is, but there’s nothing we can do to protect you, because you’re not a paid employee of the institution,’” she added of her conversation with human resources.

The Deal or No Deal alum, who is biracial, also said that a member of the royal family expressed “concern” over their baby boy’s skin color ahead of his arrival.

“That conversation, I am never going to share,” her husband added, later clarifying that Queen Elizabeth II and Prince Philip had not made the comments. “At the time, it was awkward, I was a bit shocked.”

The pair stepped back from their roles as senior members of the royal family in January 2020, and their exit was finalized in February 2021. They currently live in Montecito, California, with their 22-month-old — and are expecting baby No. 2.

“It’s a girl!” Harry gushed at the time. “Just to have a boy and a girl, what more can we ask for? We’ve got our family. We’ve got, you know, the four of us and our two dogs, and it’s great.”