Paying their respects. On Friday, April 9, Prince Harry and Meghan Markle posted a tribute to Prince Philip following the news that he had died at age 99.

“IN LOVING MEMORY OF His Royal Highness,” the statement, posted to the couple’s website, read. “The Duke of Edinburgh 1921-2021. THANK YOU FOR YOUR SERVICE…YOU WILL BE GREATLY MISSED.” 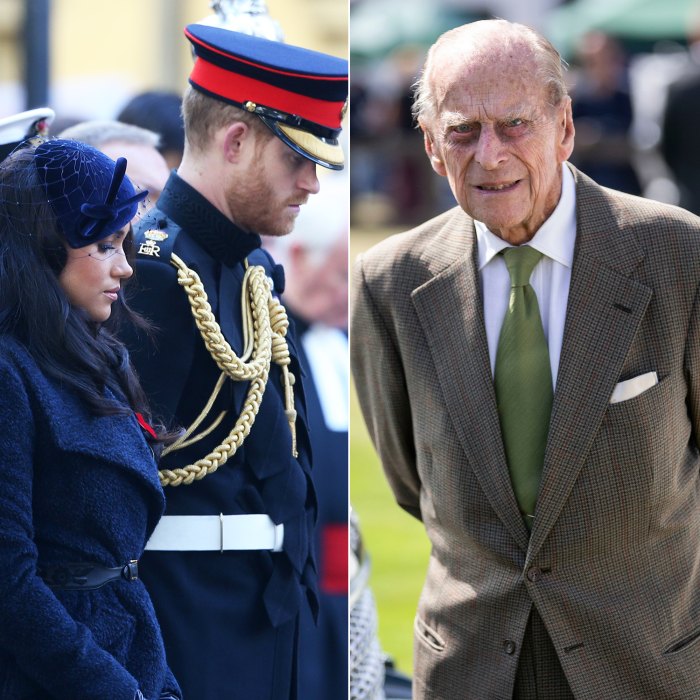 The royal was previously in the hospital for four days in December 2019. Buckingham Palace told Us in a statement at the time: “The Duke of Edinburgh traveled from Norfolk this morning to the King Edward VII Hospital in London for observation and treatment in relation to a preexisting condition. The admission is a precautionary measure, on the advice of His Royal Highness’ doctor.”

Philip was hospitalized again on February 17 as a “precautionary measure,” Buckingham Palace told Us Weekly. He was released on March 16 after a one-month stay following treatment for an infection and a successful procedure to treat a preexisting condition.

Harry, 36, and Meghan, 39, welcomed their son, Archie Harrison Mountbatten-Windsor, in May, and the Duke of Edinburgh was the first royal family member to meet their bundle of joy.

“We just bumped into the duke as we were walking by, which was so nice,” the Suits alum told members of the press at her son’s debut. “So it will be nice to introduce the baby to the family.”

The former military pilot chimed in, “Another great-grandchild.”

In January, the couple announced their decision to “step back” from their senior royal duties, moving to Canada that same month with their son. “We now plan to balance our time between the United Kingdom and North America, continuing to honor our duty to The Queen, the Commonwealth, and our patronages,” they explained in a statement at the time. “This geographic balance will enable us to raise our son with an appreciation for the royal tradition into which he was born, while also providing our family with the space to focus on the next chapter, including the launch of our new charitable entity.”

The pair announced earlier this month that they are expecting baby No. 2. Philip already has nine great-grandchildren, including Archie. Prince William and Duchess Kate’s eldest son, Prince George, now 7, arrived in 2013, followed by Princess Charlotte, now 5, and Prince Louis, now 2. Princess Eugenie gave birth to a baby boy on February 9, Zara Tindall is the mother of Mia, 7, and Lena, 2, and Peter Phillips has Savannah, 10, and Isla, 8.

When Philip turned 98 in June, Harry and Meghan sent him a sweet birthday message. “Wishing His Royal Highness The Duke of Edinburgh, Sir, Grandpa a very Happy 98th Birthday!” the pair captioned an Instagram upload. One of the photos adorably showed Philip and his grandson laughing together.

Philip was born on Corfu island in 1921 to Princess Alice of Battenberg and Prince Andrew of Greece and Denmark. He was the brother of four late sisters: Princess Cecilie, Princess Sophie, Princess Margarita and Princess Theodora.

On November 20, 1947, Philip married Queen Elizabeth II at Westminster Abbey in front of 2,000 guests. The newlyweds honeymooned in the Scottish royal estate of Balmoral and went on to welcome Prince Charles, Prince Andrew, Princess Anne and Prince Edward.

The queen gushed about her husband during their 50th anniversary celebration, saying, “He has, quite simply, been my strength and stay all these years, and I, and his whole family, and this and many other countries, owe him a debt greater than he would ever claim, or we shall ever know.”

In 2002, she praised Philip again. “The Duke of Edinburgh has made an invaluable contribution to my life over these past 50 years,” she said while celebrating the 50th anniversary of her coronation.