Doing it their way! Prince Harry and pregnant Meghan Markle opened up about their decision to step away from the British royal family during their CBS sit-down interview on Sunday, March 7.

Harry, 36, explained that as pressure mounted on his wife, 39, and she even spoke to her husband about having suicidal thoughts, he “went to all the places which I thought I should go to, to ask for help. We both did, separately and together.”

He explained that their decision to take a step back came from “a lack of support and lack of understanding.” 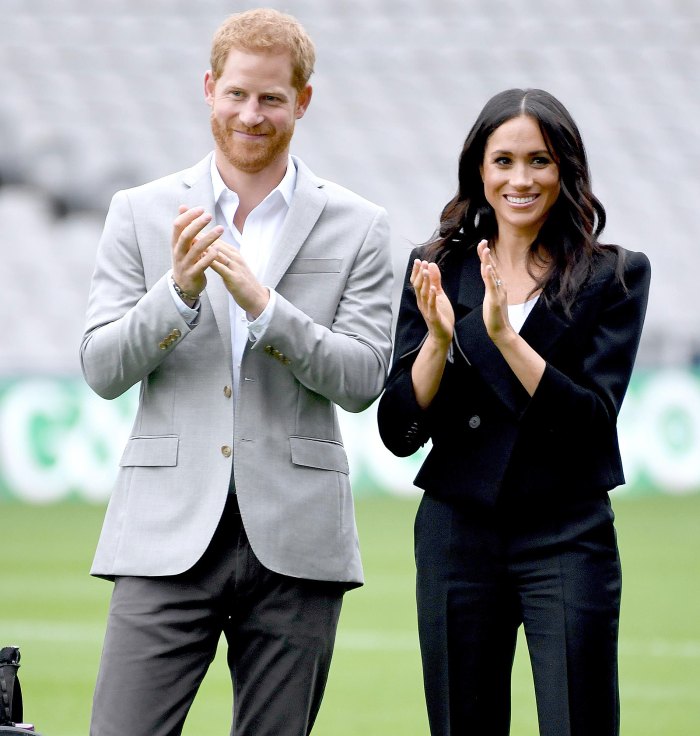 “We were saying, ‘OK, if this isn’t working for everyone, we’re in a lot of pain, you can’t provide us with the help that we need, we can just take a step back. We can do it in a commonwealth country,’” Harry said. “We suggested New Zealand, South Africa … My biggest concern was history repeating itself, and I’ve said that before on numerous occasions, very publicly. And what I was seeing was history repeating itself, but more, perhaps — or definitely far more dangerous, because then you add race in and you add social media in.”

“When I’m talking about history repeating itself, I’m talking about my mother [Princess Diana],” he continued. “When you can see something happening in the same kind of way, anybody would ask for help, ask the system of which you are a part of, especially when you know there’s a relationship there, that they could help and share some truth or call the dogs off, whatever you want to call it. So, to receive no help at all and to be told continuously, ‘This is how it is. This is just how it is. We’ve all been through it.’”

He said that he was struck by the overt racism Meghan faced. “I hadn’t really thought about the mixed race piece, because I thought, well, well, firstly, you know, I’ve spent many years doing the work and doing my own learning. But my upbringing in the system, of which I was brought up in and what I’ve been exposed to, it wasn’t — I wasn’t aware of it, to start with. But, my god, it doesn’t take very long to suddenly become aware of it.”

The prince insisted that he didn’t “blindside” his grandmother the queen with the couple’s decision to step back as senior members of the royal family. “I have too much respect for her,” he said, explaining that he’s had three conversations with Queen Elizabeth and two conversations with his father, Prince Charles, “before he stopped taking my calls.”

After outlining the details in a letter to his father, as requested, Harry said he took things into his own hands.

“It was like, ‘I need to do this for my family.’ This is not a surprise to anybody. It’s really sad that it’s gotten to this point, but I’ve got to do something for my own mental health, my wife’s, and for Archie’s, as well, because I could see where this was headed,” he said.

The Duke and Duchess of Sussex shocked the world in January 2020 when they announced on their now-defunct Instagram account that they intended to “step back as ‘senior’ members” of the family while working to “become financially independent.” While they officially exited that March, they were allowed a 12-month trial period should they have changed their minds.

However, last month, Buckingham Palace announced that the couple had informed Queen Elizabeth II that they “will not be returning as working members of the royal family.” As a result, their honorary military appointments and royal patronages will be “redistributed among working members,” according to the palace.

Harry and Meghan responded at the time with a pointed statement issued via their spokesperson: “As evidenced by their work over the past year, the Duke and Duchess of Sussex remain committed to their duty and service to the U.K. and around the world and have offered their continued support to the organizations they have represented regardless of official role. We can all live a life of service. Service is universal.”

While a source exclusively told Us Weekly that the prince and the Suits alum “finally feel free,” a second insider revealed that Elizabeth, 94, “was hoping that they’d return.” The queen herself also confirmed in a statement that she was “saddened by their decision.”

Harry and Meghan, who moved to Montecito, California, after their step back, married in May 2018 and welcomed son Archie, now 22 months, one year later. After suffering a miscarriage in July 2020, the pair announced on Valentine’s Day that they are “overjoyed to be expecting their second child.” A source later told Us, “They’re super excited that Archie is going to have a sibling. They’ve always wanted two children. It’s a dream come true.”