Nearly one year after they announced their decision to step down from their roles as senior members of the royal family, Prince Harry and Meghan Markle remain close with Queen Elizabeth II.

Royal correspondent Omid Scobie opened up about the relationship between the Duke of Sussex, 36, Suits alum, 39, and the queen, 94, in an interview with Entertainment Tonight on Friday, March 5. Days before Harry and Meghan’s tell-all interview is set to air on CBS, the longtime royal reporter admitted that the talk could put the couple in a difficult spot with the monarch. 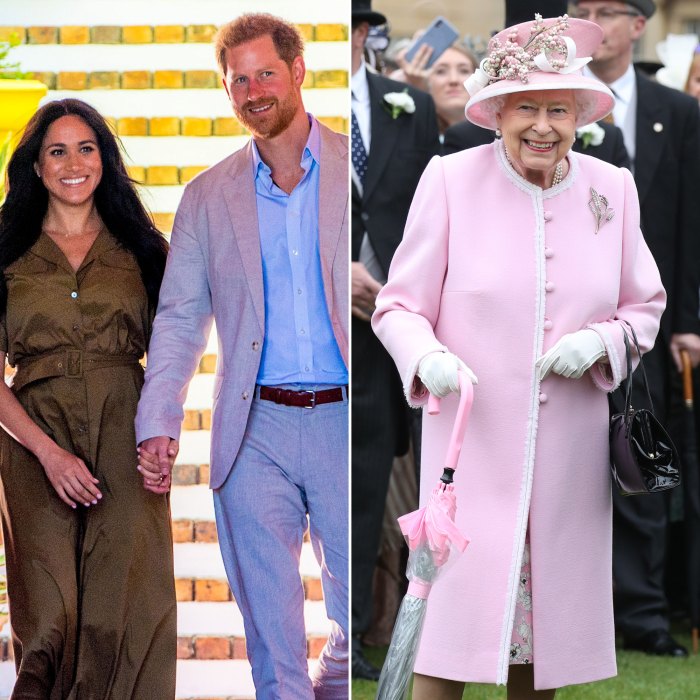 The Finding Freedom coauthor continued: “We heard Harry talking very warmly about his grandfather on James Corden’s show not so long ago, and I think we’ll hear more of that [during their CBS primetime tell-all].”

Scobie told ET, “This idea that people have that they may be throwing the queen under the bus on national television … is far from the truth.”

He noted, “This is a couple that understands the difference between the machine of the monarchy, the institution, and the family itself. And it’s that family with certain individuals they have a great relationship with.”

Scobie’s comments come days after an article from The Times, which was published on Tuesday, March 2, that alleged the California native bullied royal advisers before stepping down in March 2020. Buckingham Palace responded to the allegations in a statement to Us Weekly, “We are clearly very concerned about allegations in The Times following claims made by former staff of The Duke and Duchess of Sussex.”

The British royal household’s statement continued: “Accordingly our HR team will look into the circumstances outlined in the article. Members of staff involved at the time, including those who have left the Household, will be invited to participate to see if lessons can be learned. The Royal Household has had a Dignity in Work policy in place for a number of years and does not and will not tolerate bullying or harassment in the workplace.”

Allegations of mistreatment outlined in the article suggest the newspaper’s staff was approached by royal palace aides who claimed a former adviser to Markle filed a bullying complaint as she and Harry were leaving Kensington Palace. The outlet reported that Jason Knauf, the couple’s communications secretary, filed a complaint with Prince William‘s private secretary alleging that Meghan drove out two personal assistants and was affecting the confidence of another staff member.

Meghan and Harry’s communications team denied the allegations in a statement published by The Times. “Let’s just call this what it is — a calculated smear campaign based on misleading and harmful misinformation,” the statement read. “We are disappointed to see this defamatory portrayal of The Duchess of Sussex given credibility by a media outlet.”

The former actress released another statement addressing the claims the same day the Times‘ article was published. “The Duchess is saddened by this latest attack on her character, particularly as someone who has been the target of bullying herself and is deeply committed to supporting those who have experienced pain and trauma,” she said.

In a preview for her upcoming tell-all interview, set to air on CBS on March 7, Meghan accused the royals of playing a role in pushing false narratives about her and Harry.

“I don’t know how they could expect that after all of this time we would still just be silent if there is an active role that The Firm is playing in perpetuating falsehoods about us,” she said in the trailer, released on Wednesday, March 3. “And if that comes with risk of losing things, there is a lot that has been lost already.”

How old is Shirley Ballas and what’s the Strictly judge’s net worth? – The Sun