Royally interesting! Prince Harry stepped back into the spotlight on Friday, February 5, as he filmed a TV segment alongside James Corden.

The pair were seen smiling while chatting and sharing a few laughs on top of a double-decker bus in L.A. alongside a film crew.

According to TMZ, Prince Harry, 36, and Corden, 42, boarded the bus in the CBS lot with the team in tow. They were joined by a full crew with three cameras and a police escort. The British royal’s wife, Meghan Markle, was not in attendance. 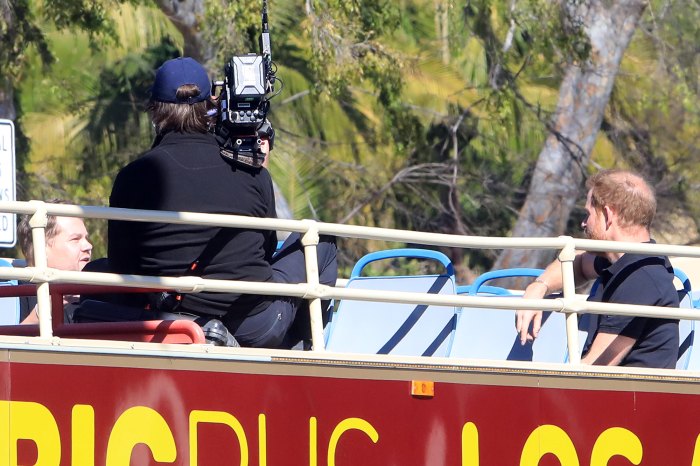 The Duke of Sussex and Late Late Show host are good friends. Corden and his wife, Julia Carey, attended Prince Harry’s wedding to the California native in May 2018. He gushed about the experience during an episode of his late-night show.

“I’ve had quite the weekend,” Corden shared at the time. “I’ve known Prince Harry about seven years now and it was wonderful. It was one of the most beautiful ceremonies I’ve ever been to. It was gorgeous, the whole affair, it was happy and it was joyous. It was uplifting.”

Corden gave viewers a glimpse inside Prince Harry and the 39-year-old Suits alum’s big day, showing a photo of himself at the wedding. “I couldn’t have been having a better time,” he said, noting that the photo might suggest otherwise. “In my defense, what face do you make whilst you’re watching a cellist in a church?”

Prince Harry and Markle’s lives have changed drastically since then. A source told Us Weekly in January they are settling into life as private citizens after stepping down as senior members of the royal family in March 2020. The couple and son Archie, 19 months, moved to the United States, settling in Montecito, California, in July.

“Harry doesn’t have any regrets about leaving the royal family whatsoever and is really happy in Montecito,” the insider said. “He and Meghan are enjoying their new life in California — being a normal family and having the freedom to make their own decisions without anyone watching over them.”

Since leaving the United Kingdom, the British Army veteran and California native have been focusing on other projects. They launched the Archewell foundation in April 2020 and a new Spotify podcast, “Archewell Audio.” The first episode was released in December 2020.