A family in mourning. Prince Harry is “really upset” about the death of his grandfather, Prince Philip, a source tells Us Weekly exclusively.

“Harry feels guilty for not being there to say goodbye to Prince Philip in person,” the insider adds.

Buckingham Palace announced the death of Philip, 99, on Friday, April 9. His Royal Highness had been in and out of the hospital for months prior to his death and returned home on March 16 following heart surgery.

Shortly after the news was announced, Harry, 36, and wife Meghan Markle shared a statement on their website. 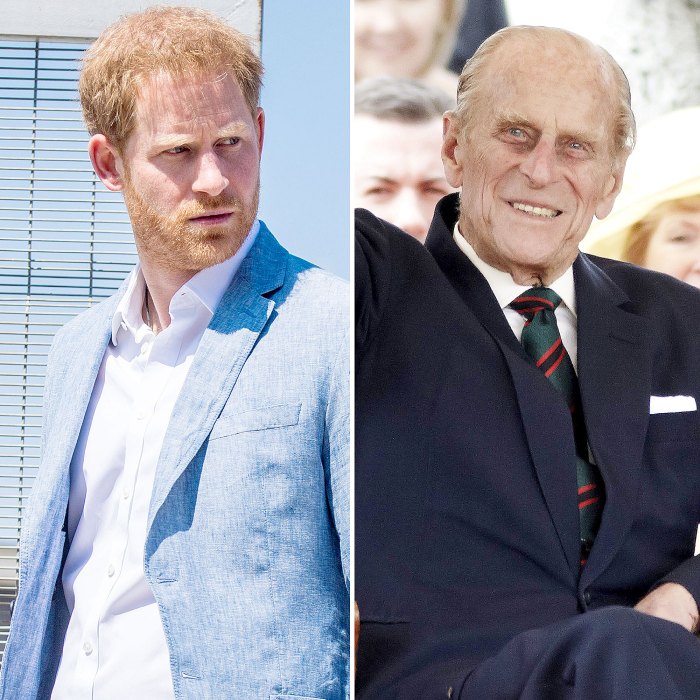 “IN LOVING MEMORY OF His Royal Highness,” the statement read. “The Duke of Edinburgh 1921-2021. THANK YOU FOR YOUR SERVICE…YOU WILL BE GREATLY MISSED.”

Queen Elizabeth II‘s late husband was honored with a message posted outside Buckingham Palace’s gates as part of a longstanding tradition. However, a framed version of the statement will not remain up long. Due to the pandemic, the family does not want crowds gathering outside.

The queen, 94, alerted her children, including Prince Charles, Princess Anne and Prince Andrew, of the passing on Friday morning, before reaching out to her grandsons Prince William and Harry, who were both “devastated” by the news, a second source told Us. Despite Philip’s poor health, “the loss was still a surprise,” the insider added.

As plans are made for the funeral, the monarch, who was married to Philip for 73 years before his death, is hoping that Harry will travel from their home in California.

“The queen wants Harry to be there,” the second source told Us. “Harry is hopeful that he’ll be able to return home to honor his grandfather, who he had a close bond with.”

However, the current state of the world may make that difficult. With the country under lockdown, those visiting abroad must test negative twice for COVID-19 and quarantine for 10 days.

The Sussexes have not been back to the U.K. since they made their decision to step back from their royal roles and relocate to California in March 2020. Last month, the couple opened up about their lives away from the palace in a CBS tell-all interview.

The former actress, 39, also revealed that she checked in with the queen after learning of Philip’s hospitalization in February.

“I just picked up the phone and I called the Queen just to check in,” the Suits alum said. “I just called, that’s what we do.”