Nothing’s off limits. Prince Harry opened up about his rocky relationship with his older brother, Prince William, and their father, Prince Charles, during an eye-opening CBS interview with wife Meghan Markle on Sunday, March 7.

Harry, 36, revealed that before he and Meghan announced their royal step back in January 2020, he had three conversations with his grandmother Queen Elizabeth and two conversations with Charles “before he stopped taking my calls.” After Harry outlined his and Meghan’s plans and concerns in writing, Charles’ youngest son took matters into his own hands and formalized their decision to step down as senior members of the royal family.

The British prince admitted on Sunday that “there’s a lot to work through” with his father. “I feel really let down because he’s been through something similar, he knows what pain feels like … Archie is his grandson,” Harry said. “I will always love him. There’s a lot of hurt that’s happened. I will continue to make it one of my priorities to heal that relationship.”

As far as his rift with William, Harry admitted, “As I said before, I love William to bits. We’ve been through hell together and we have a shared experience but we are on different paths.”

“The relationship is space at the moment and time heals all things, hopefully,” he added. Harry also said earlier in the interview that while he was able to break free, his father and brother, as future kings, are “trapped” in their lives.

Harry previously revealed in October 2019 that things between him and the Duke of Cambridge, 38, were a little tense after rumors of a rift continued to make headlines. 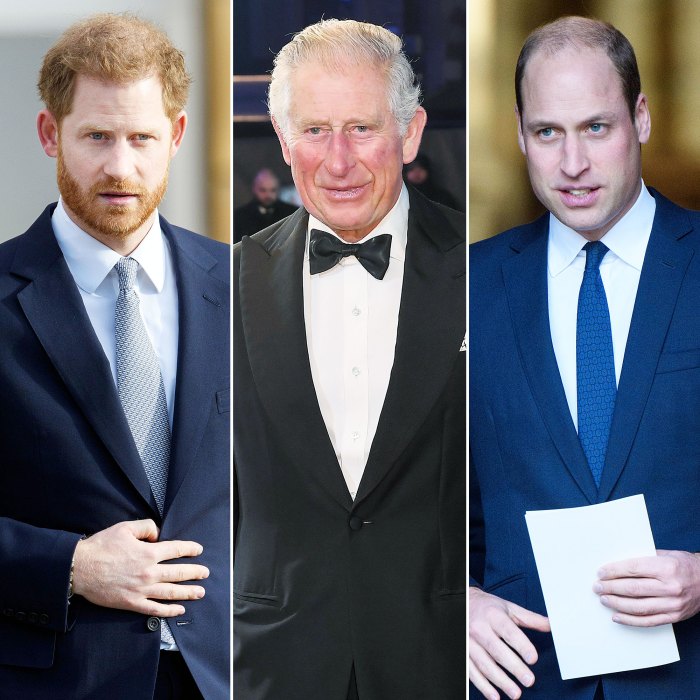 “We’re certainly on different paths at the moment, but I will always be there for him and I know he’ll always be there for me,” the Archewell Inc. founder said during ITV’s Harry & Meghan: An African Journey special. “We don’t see each other as much as we used to because we’re so busy, but I love him dearly. The majority of the stuff is created out of nothing but as brothers, it’s just as I said, you have good days, you have bad days.”

Three months later, Harry and Meghan, 39, announced that they would be stepping back from their senior roles within the British royal family. At the time, a source told Us Weekly exclusively that their decision hadn’t “gone down well with William,” who was “blindsided” by the news.

Harry and the Suits alum later relocated to California with their son, Archie, 21 months. The move was a big adjustment, especially with the coronavirus pandemic in full swing, and inspired William to extend an olive branch to his little brother.

“William’s advised Harry to return to London or move elsewhere, somewhere safer,” an insider exclusively revealed in June 2020. “He’s concerned about his brother’s well-being and safety.”

Despite their ups and downs — and the miles of distance between them — the siblings attempted to make peace via video chat during the holiday season. They’ve taken great strides to patch up their relationship, but still have a long way to go.

“William and Harry’s fallout was very real, very ugly and incredibly intense,” a source claimed in January. “They’d reached an impasse, there was so much mud under the bridge and a lot of people felt their feud was beyond repair. … It’s certainly been a roller-coaster for everyone involved.”

When the Sussexes announced their plans to sit down for a televised tell-all interview following their permanent step back from the royal family, however, William and Duchess Kate weren’t pleased. “They are utterly aghast,” a source said, noting that Harry and Meghan weren’t planning to “talk negatively” about the Cambridge couple.

Josh Duhamel Emailed Armie Hammer After Replacing Him in Film

Travis Barker Has Kourtney Kardashian’s Orgasm Scent in a Candle