Boys’ night in! As Pete Davidson’s romance with Kim Kardashian has continued heating up, he spent the evening getting to know some of her famous family members.

“Boyz night was wild 🛌 🛌 🛌 🛌,” Scott Disick captioned an Instagram Story video on Saturday, March 19, watching a movie with his pals. After panning the camera around the room, the Saturday Night Live star, 28, silently made a silly face in the final frame.

While Saturday night was just for the boys, Davidson’s girlfriend was out of town, celebrating the Skims Swim launch with her sister Khloé Kardashian. 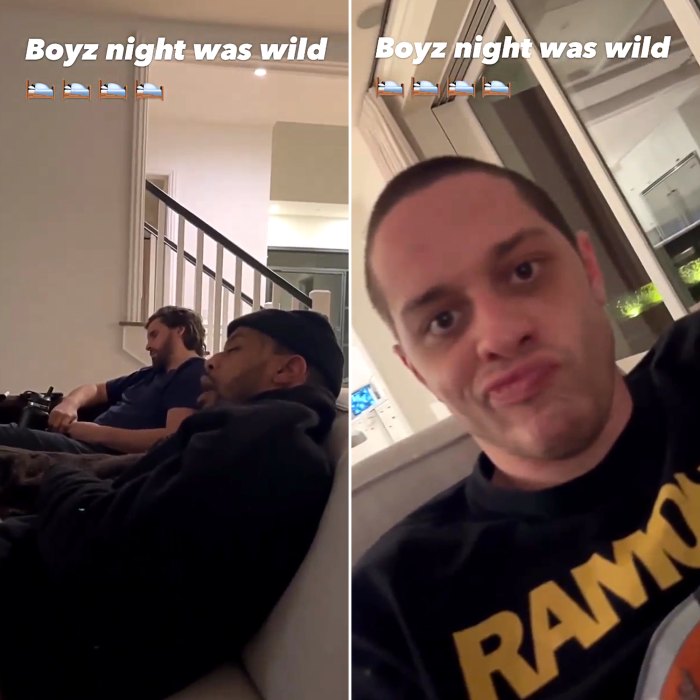 “We’ve hit the beach!! Our @skims swim pop-up is now open in the Miami Design District,” the KKW Beauty mogul, 41, wrote via Instagram Story on Saturday.

The Selfish author was first linked to the comedian in October 2021 after she hosted SNL earlier that month, where they shared a brief stage kiss. The pair’s romance continued developing as she visited his native Staten Island and he spent more time in California. They later made their Instagram debut as a couple on March 12.

“I have the cutest pictures of us and I want to be like, ‘Oh, we’re so cute!’” Kim gushed during a Wednesday, March 16, appearance on The Ellen DeGeneres Show, noting her beau got several tattoos and a branding in her honor. “I don’t know what the right thing to do is. I haven’t dated since before Instagram existed. I don’t know what the rules are [when it comes to posting a new relationship].”

The Keeping Up With the Kardashians alum — who shares children North, 8, Saint, 6, Chicago, 4, and Psalm, 2, with Kanye West, whom she filed for divorce from in February 2021 — is set to open up about the pair’s budding connection on her family’s forthcoming series, The Kardashians.

“I have not filmed with [Pete],” she told Variety in a March 9 profile, promoting the show’s April premiere. “And I’m not opposed to it. It’s just not what he does. But if there was an event happening and he was there, he wouldn’t tell the cameras to get away. I think I might film something really exciting coming, but it wouldn’t be for this season.”

While the King of Staten Island star has yet to film any scenes for the reality TV series, his blossoming romance with Kim has already been highlighted in the trailer. In one scene, matriarch Kris Jenner proclaims that their connection was one that no one “saw coming.”

Many of Kim’s family members have been supportive of her connection with Davidson, including the 39-year-old Talentless founder.

“The town,” Disick — who shares children Mason, 12, Penelope, 9, and Reign, 7, with Kim’s sister Kourtney Kardashian — commented on the Dancing With the Stars alum’s first photos with her beau in honor of her The Town-inspired caption. (Kim initially wrote “Whose car we gonna take?!” alongside the couple snaps in honor of Ben Affleck’s dialogue.)