“Pete and Phoebe are still going strong despite not being able to physically spend time together,” a source tells Us of the Saturday Night Live star, 27, and the Bridgerton actress, 25, who is currently filming across the pond. “They keep in touch over text and FaceTime. Right now, they’re just focused on work. … They’re not looking to rush things.”

The rising stars were first linked in March when fans spotted the twosome together in the U.K. on multiple occasions. One eyewitness told Stoke-on-Trent Live that she bumped into the comedian and the Younger actress, who packed on the PDA in Caverswall, England. “It looked like they were in a relationship and they seemed happy together,” the onlooker said last month. 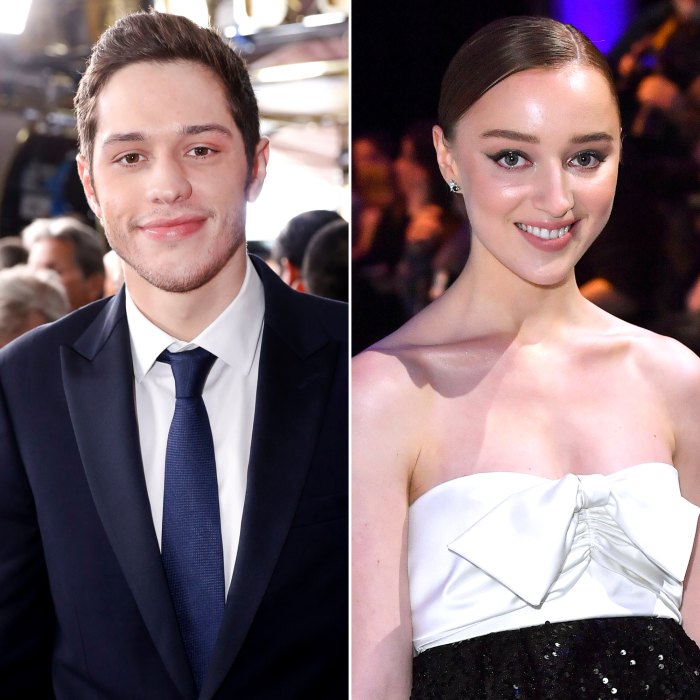 Dynevor flew to New York City, where Davidson lives and works, in February. As their romance continues to heat up, the King of Staten Island actor is already looking forward to the next time he’ll see his new flame.

“He’s hoping to visit her for her upcoming birthday,” the source adds. (The Waterloo Road alum turns 26 on Saturday, April 17.)

Until then, however, the duo are “seeing where their relationship goes” and “trying to make long distance work.” According to the source, Davidson’s sense of humor is primarily what drew Dynevor in.

“They’re happy with each other,” the insider says. “He makes her laugh. Pete is a good guy and definitely a charmer. He’s easy-going and fun to be around.”

Before connecting with the Big Time Adolescence star, the U.K. native had fans convinced that sparks were flying between her and her Bridgerton costar Regé-Jean Page. The pair’s chemistry as Daphne Bridgerton and Simon Bassett, respectively, had viewers swooning — but Dynevor denied the romance rumors.

“I’d love to say there was really something between us, but no, it has always been strictly professional,” she told You magazine in February. “There was so much pressure on us to get it right that it was all about the work. We have a really professional working relationship. I’m glad for that, actually. It would be very complicated if it went further.”

Davidson, for his part, was previously engaged to Ariana Grande from June to October 2018. After the “Positions” singer, 27, called their relationship a “distraction” in her August 2019 Vogue cover story, the Guy Code alum fired back.

“She has her songs and stuff and this is what I have,” he said in his Pete Davidson: Alive From New York standup special, which hit Netflix in February 2020. “You’re like, ‘Pete, this isn’t fair. You’re airing out dirty laundry. How could you do that? Where did she say this stuff? To her friends in the confidence of her own home?’ No, she said it on the cover of Vogue magazine.”

He added: “Can you imagine if I did that? My career would be over tomorrow if I spray-painted myself brown and hopped on the cover of Vogue magazine and just started s–ting on my ex.”

The Set It Up star has since had short-lived romances with Kate Beckinsale, Margaret Qualley and Kaia Gerber. Grande, for her part, announced her engagement to Dalton Gomez in December 2020 after less than one year of dating.

Us reached out to reps for Davidson and Dynevor but did not hear back.

India Covid cases surge past 100,000 a day as ‘double mutant’ spreads amid ‘packed crowds with no masks’