One for the ages! Kansas City Chiefs quarterback Patrick Mahomes was just starting school when his Super Bowl LV opponent Tom Brady was winning his first championship in 2002.

“When Tom Brady played — and won — his first Super Bowl in 2002, Patrick Mahomes and Josh Allen were both in kindergarten,” Fox Sports reporter Bruce Feldman pointed out on Twitter on Sunday, January 24, ahead of Mahomes’ face-off against Bills quarterback Josh Allen in the AFC Championship game. “Crazy.”

When the Kansas City Chiefs, who beat the Bills on Sunday, take on the Tampa Bay Buccaneers in Super Bowl LV on Sunday, February 7, it will mark the greatest age difference among starting quarterbacks in Super Bowl history. Mahomes, 25, is 18 years younger than Brady, 43. 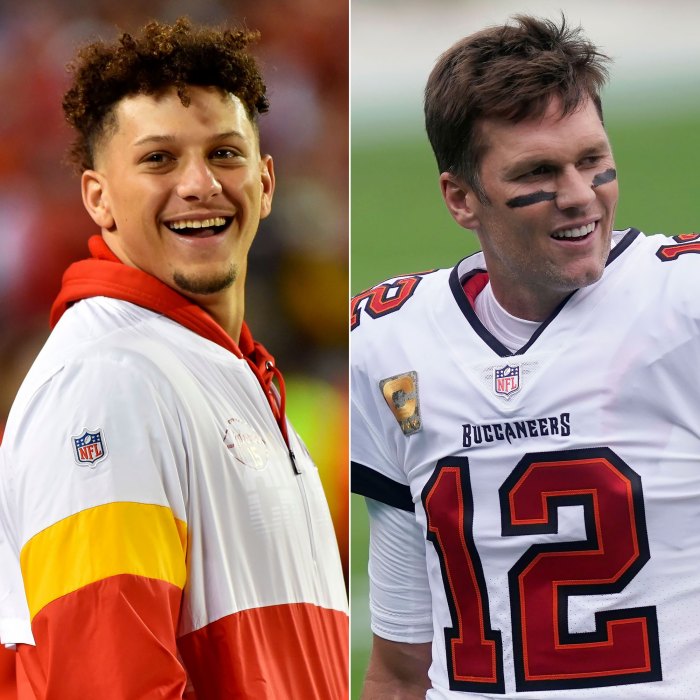 “Patrick Mahomes was in kindergarten when Tom Brady won his first Super Bowl. Now Mahomes will face Brady for the title 19 years later Trophy,” ESPN tweeted on Monday, January 25, sharing a side-by-side photo of the quarterbacks in 2002.

Baseball guru Christopher Kamka pointed out that Mahomes was born in 1995, which is the same year Brady was drafted by the Montreal Expos as a catcher in the 18th round of the MLB draft. The California native opted to go to the University of Michigan instead and play football.

Mahomes, for his part, joked about facing the legendary football player, who is the oldest quarterback in the league, after his win on Sunday.

“Being able to go up against the one of the greatest, if not the greatest, quarterback of all-time in his 150th Super Bowl is gonna be a great experience for me,” he said via Pro Football Talk.

The Texas native will be appearing in his second Super Bowl, winning last year’s game against the San Francisco 49ers. Brady, for his part, has appeared in nine Super Bowls with the New England Patriots, his last being in 2019 when the team beat the Los Angeles Rams.

The father of three, who left the Patriots in March 2020 and went to the Buccaneers, has won six titles over his past 20 seasons in the NFL and could take home No. 7, come February.

In addition to a possible history-making game for Brady — he already has more Super Bowl wins than any quarterback in history — the age differences between the two players is getting fans more excited to tune into the big game.

Sports Center poked fun at the 18-year age gap, sharing a photo of Yoda and Baby Yoda from the Star Wars franchise to represent Brady and Mahomes, respectively.

Twitter Sports shared side-by-side photos of a baby goat (as Mahomes) and a full-grown goat (as Brady), alluding to the athletes being two of the greatest players of all time.

The Buccaneers earned their spot in Super Bowl 2021 by beating the Green Bay Packers on Sunday. Brady celebrated the achievement by finding his son John, 13, in the stands and giving him a big hug. He was also sent congratulatory messages by his wife, Gisele Bündchen, with whom he shares son Benjamin, 11, and daughter Vivian, 8, and his ex Bridget Moynahan, who is the mother of John.

“We love and are so proud of you, papai!!!” the Brazilian supermodel, 40, wrote on a photo of her husband of 11 years via her Instagram Stories.

The Blue Bloods actress, for her part, shared two photos of Brady after making it to his 10th Super Bowl via her Instagram. “Could not be more proud @tombrady said he would do it and he did,” the New York native, 49, wrote. “Congratulations @buccaneers.”

House will vote on $1,400 stimulus checks next week meaning you could get your payment in February