Paris Hilton testified about her “traumatizing” alleged abuse as a teen at Utah’s Provo Canyon School on Monday, February 8.

“I am an institutional abuse survivor and I speak today on behalf of the hundreds of thousands of children currently in residential care facilities across the United States,” Hilton, 39, said in her testimony to the Utah Senate Judiciary, Law Enforcement and Criminal Justice Committee. “For the past 20 years, I have had a recurring nightmare where I’m kidnapped in the middle of the night by two strangers, strip-searched and locked in a facility. I wish I could tell you that this haunting nightmare was just a dream, ​but it is not​.”

The Simple Life alum then recalled being woken up in the middle of the night at 16 years old by two transporters who allegedly had handcuffs. 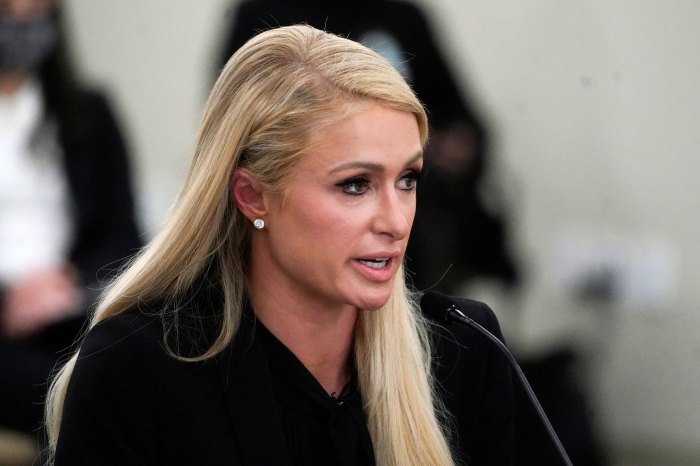 Paris Hilton speaks at a committee hearing at the Utah State Capitol, in Salt Lake City on February 8, 2021. Rick Bowmer/AP/Shutterstock

“They asked me if I wanted to go the easy way or the hard way,” she claimed, while getting emotional in the courtroom. “They carried me out of my home as I screamed at the top of my lungs for my parents’ help. I was taken to the airport and separated from everything and everyone I knew and loved. I had no idea what was happening or where I was going until we landed. This was my introduction to the state of Utah.”

Hilton detailed going to more than one facility in her teens, saying she wound up at the Provo Canyon School last.

“I was verbally, mentally and physically abused on a daily basis,” she alleged of the facility.​ “I was cut off from the outside world and stripped of all my human rights. I was not allowed to be myself.”

The heiress claimed that “without diagnosis” she was “forced to consume medication that made me feel numb and exhausted. I didn’t breathe fresh air or see the sunlight for 11 months.”

She continued: “There was zero privacy — every time I would use the bathroom or take a shower — it was monitored. At 16 years old — as a child — I felt their piercing eyes staring at my naked body. I was just a kid and felt violated ​every single day.”

Hilton noted that while the school “marketed itself as a premiere treatment center, it was as if it was hell itself was on earth,” saying she “cried myself to sleep every single night, praying I would wake up from this nightmare.”

The California native claimed the staff was “evil and sadistic” before alleging that she was thrown into the isolation room one day “for no reason.”

Hilton said that the “small room, covered in scratch marks and smeared blood with no bathroom is one of the most vivid and traumatizing memories I’ve ever experienced in my entire life.”

She claimed that “children were restrained, hit, thrown into walls, strangled and sexually abused regularly at Provo.”

The “Stars Are Blind” singer later revealed why she is now sharing her story, saying, “Talking about something so personal ​was​ and ​is still terrifying. And I cannot go to sleep at night knowing that there are children that are enduring the same abuse that I and so many others went through. Neither should you. I am proof that money doesn’t protect against abuse.”

Hilton’s testimony was heard on Monday, along with two other alleged victims, in support of a bill brought by Utah Senator Michael McKell, calling for reform to the state’s laws regarding similar institutions. The bill passed out of the committee unanimously and will now move to the Utah State Senate for a vote.

The former reality star previously opened up about her traumatic experience in YouTube’s This Is Paris documentary, which was released in September 2020.

“[The staff] would make people take their clothes off and go in there for, like, 20 hours,” she claimed in the documentary. “I felt like I was going crazy. Someone was in the other room, there was like, a straitjacket. … I was just freezing, was starving, was alone. I was scared.”

She explained that she could not tell her parents about the alleged abuse because “every time I tried I got punished by them or they would say, ‘We’re just going to tell your parents you’re a liar, and they’re never going to believe you.’”

Provo Canyon School originally opened in 1971 and was sold by its previous ownership in August 2000. The new owners previously told Us that “we therefore cannot comment on the operations or patient experience prior to this time.”